My Favorite Texas Trip: Growing a Beard for St. Patrick’s Day in Shamrock 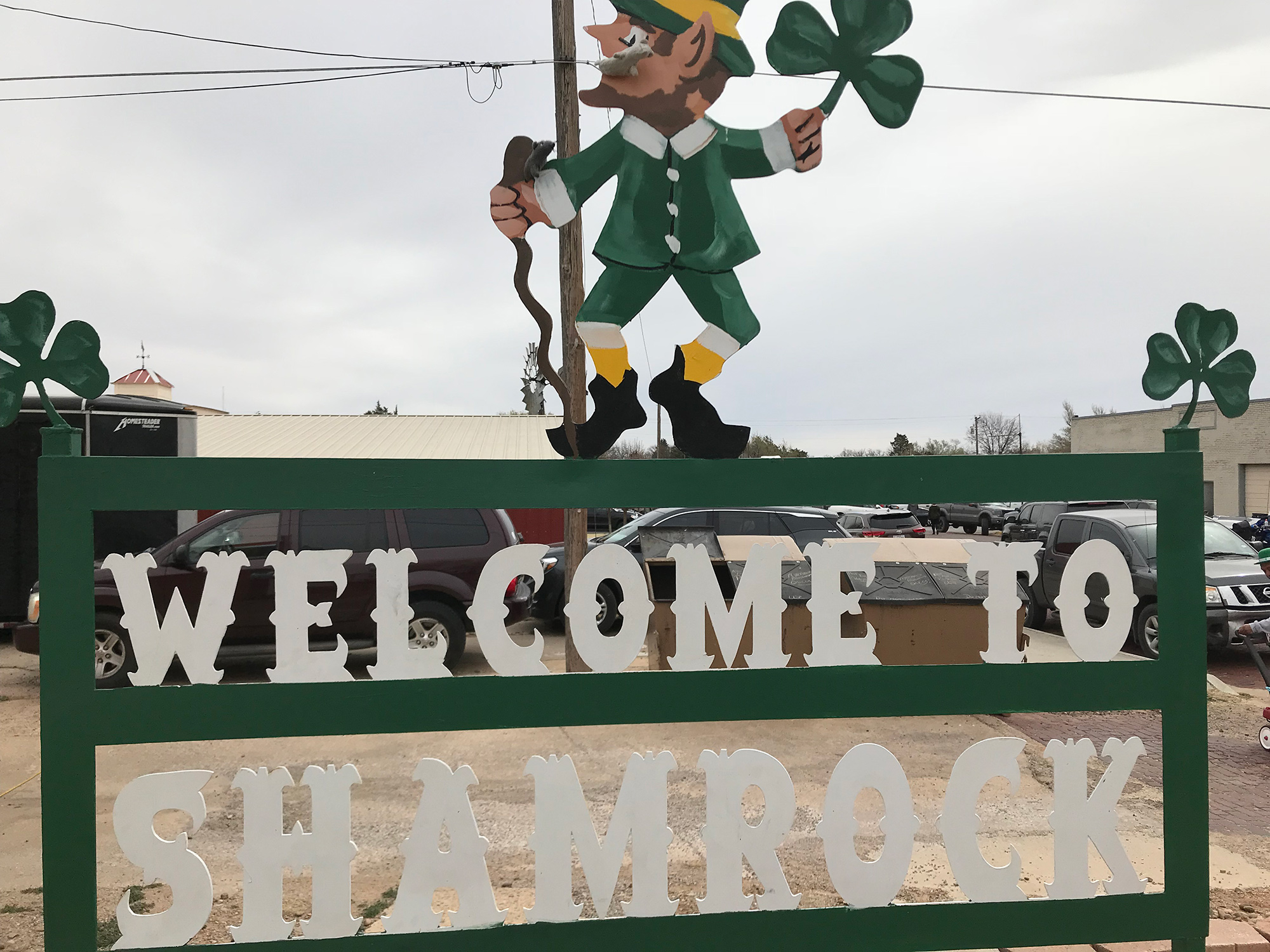 It began, as my adventures often do, at the Game Xchange in my hometown of Temple. Browsing the aisles with no money to spare, visiting home from college just months shy of my 20th birthday, my friends and I spot what we now know to be a gem: a 2003 short documentary entitled Growin’ a Beard. The film follows the story of competitive beard-growers preparing for an annual showdown in the Panhandle town of Shamrock. We’re fascinated by the prospect of such a feat; my grandfather’s beard—which he claims he was born with—is an icon to all my friends and family, but the beards we saw on the DVD case could rival even his. After gathering funds, we return to purchase the $7 DVD.

The Donegal beard-growing competition, as it has since 1938, takes place during Shamrock’s St. Patrick’s Day Festival, which was declared the state’s official St. Patrick’s Day celebration by the Texas Legislature in 2013. Entrants must start growing their Donegal—a carefully trimmed Irish beard that wraps around the chin, sans mustache—no earlier than January 1, and whoever is judged to have the most authentic, full Donegal wins the title and trophy. It’s ridiculous, subjective, and to me, wildly captivating. 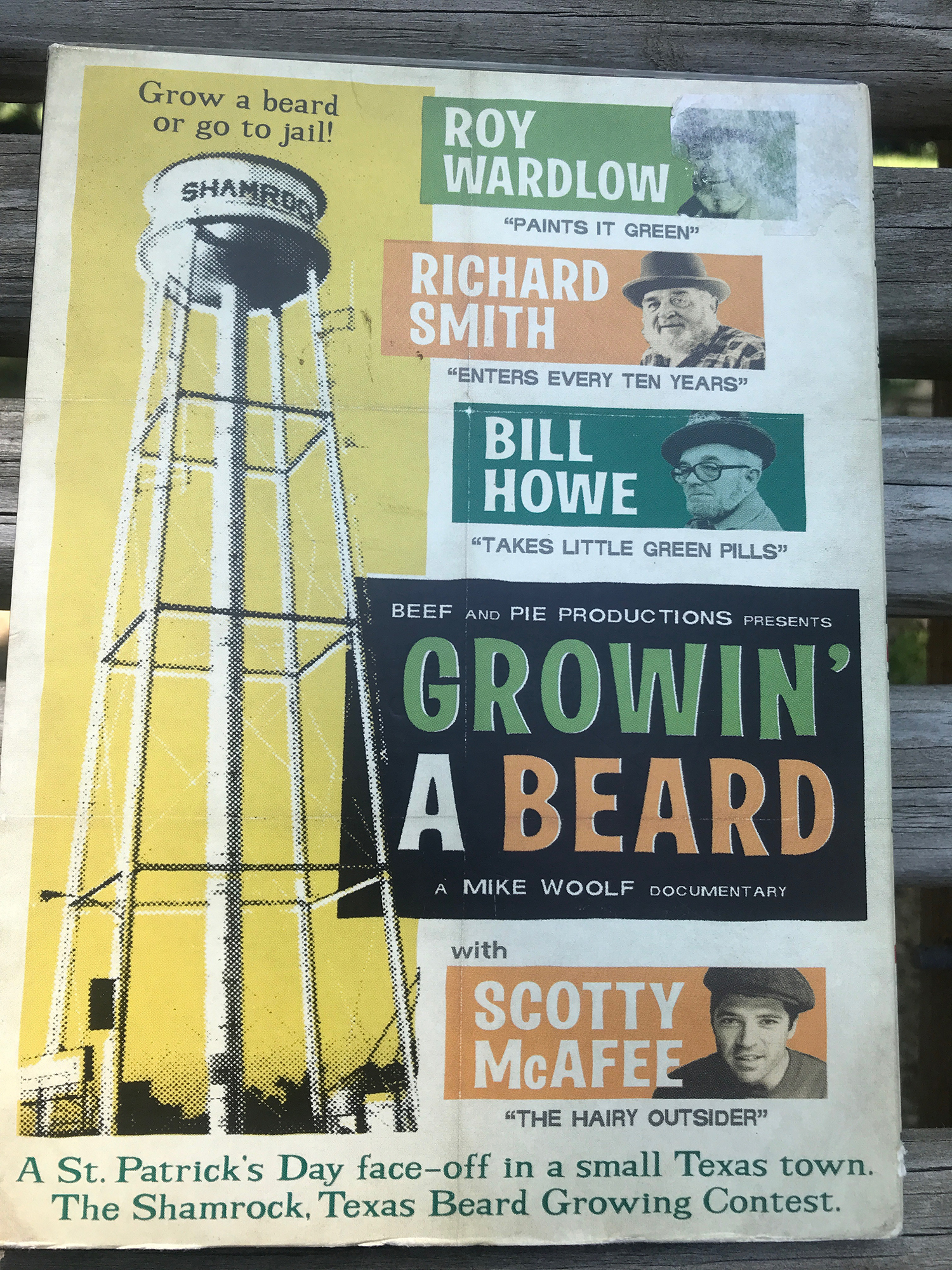 Growin’ a Beard, the documentary that inspired an all-night road trip to the Panhandle. Photo by Deborah Jones

Growin’ a Beard follows a few of the competitors from the moment they shave in the new year to the time they line up for judgement, with particular focus on a young underdog from Austin, Scotty McAfee. Accompanied by an original soundtrack of country-style beard songs (“I’ve got whiskers on my chin and jowls / got me a Donegal beard”) by Austin band The Gourds and a cast of colorful characters, it’s no wonder the film led me and my fiancé Jack to consider our own trip to Shamrock. In the past, we’d taken extensive trips for much less than a beard competition. Good thing that year’s festival fell during spring break.

Jack and I threw around the idea of traveling the six-or-so hours to Shamrock as a joke a week before St. Patrick’s Day 2018. Neither of us owned anything green or had ever celebrated the holiday at any capacity, but we fancied spontaneous day trips across the state. We didn’t decide to go to the Panhandle until the night before, at around 1 a.m., and we set off by 2. 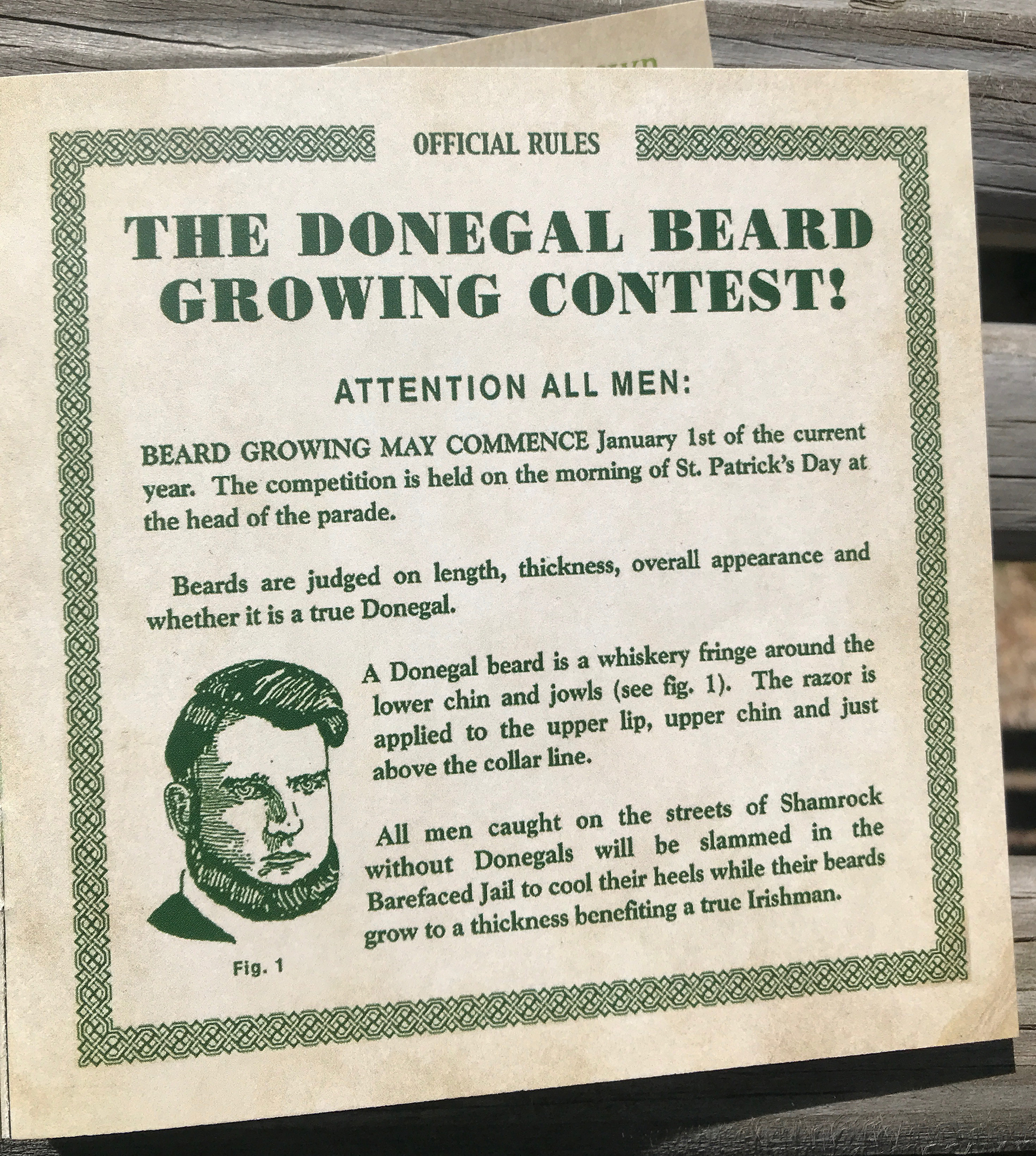 Rules and regulations for the proper Donegal beard, included in our copy of Growin’ a Beard. Photo by Deborah Jones

“When you lose, and you think you could have done better, that’s a painful loss. But if you compete, and you know you were the very best you could have been, that’s really the most important feeling you can have. This is the best beard I can grow.” – Scotty McAfee, competitive beard-grower, Growin’ a Beard.

Six hours of straight driving with no detours would land us there two hours early, but detours are nonnegotiable for me. Even in the middle of the night, I stop frequently to check out historical markers, snazzy-looking trees, and vast plots of farmland that dot the highway. Driving on an open, empty road and experiencing the vastness of Texas is a wonderful feeling.

I’d made the drive to the Panhandle in the back seat of our family’s Suburban countless times, but this was my first time taking the reins in my lime green Ford Fiesta. I found myself exhibiting symptoms of middle-age parenthood almost instantly, insisting that my fiancé play various word games with me so I could keep my mind alert in the dark. He was reluctant, so much so that he dozed off a few times, but I don’t blame him. We cycled through the alphabet by calling out words on road signs in its order, or naming fruits and vegetables starting with our ABCs. We made it there with half an hour to spare. 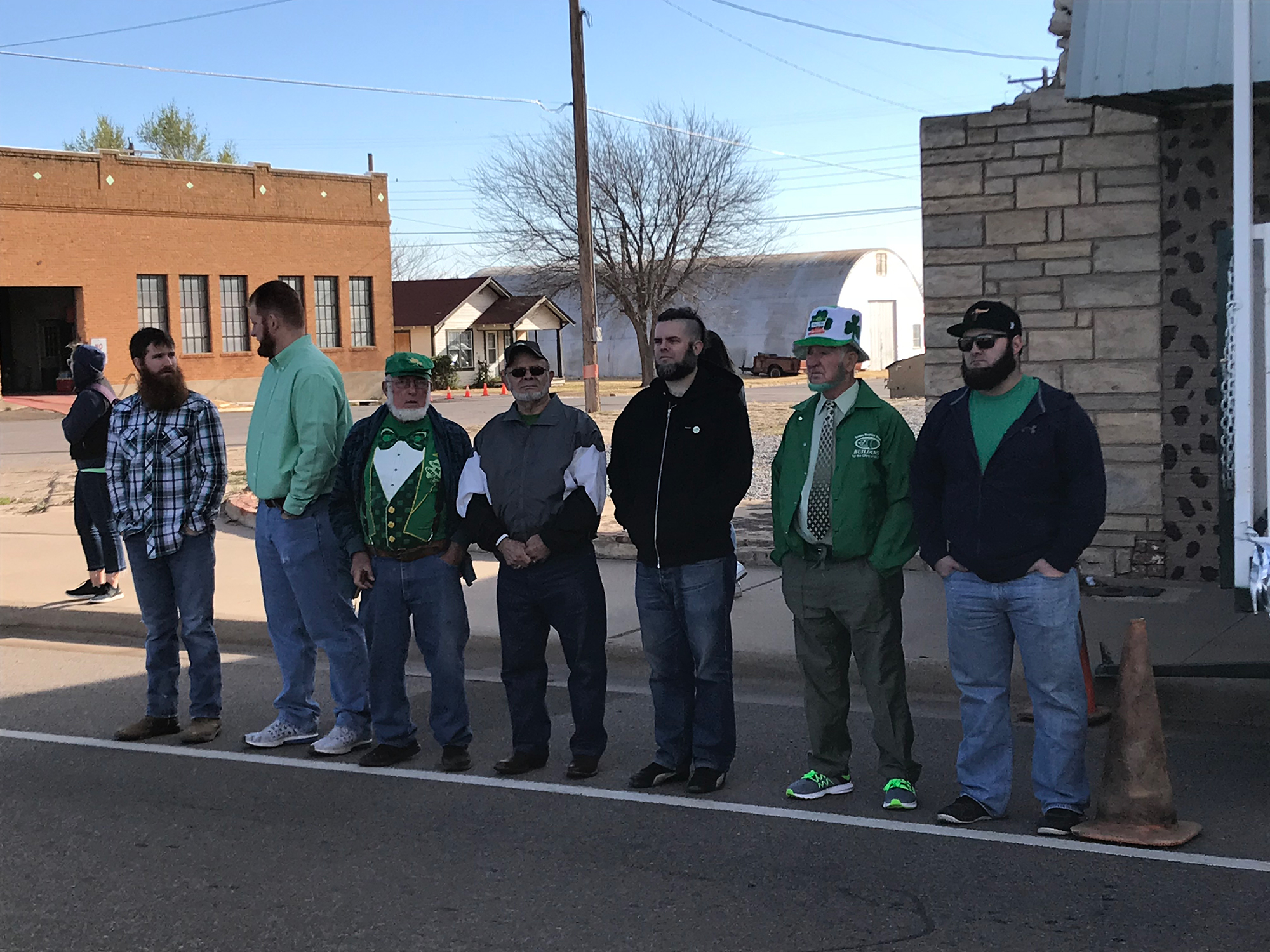 Competitive beard-growers line up for judgment at the 2018 St. Patrick’s Day celebration. Photo by Julia Jones

Shamrock was established in 1911 and given its name because it symbolized luck, and the St. Patrick’s Day celebration naturally followed a couple decades later. The town, population 1,800, draws thousands for the festival; in 1939, an estimated 30,000 attendees flooded the streets, according to a historical marker downtown.

The year we went, streets were lined with attendees overloaded with green, awaiting the community parade much more than the competition, but awaiting something nonetheless. The competitors in that year’s contest numbered only seven, and of the seven only six beards were grown in proper Donegal fashion. After approximately three minutes, the winner was declared, the trophy awarded, and the group disbanded.

I would love to tell you that it was far grander than it actually was, that it exceeded my expectations of what a beard-growing competition can and should be, but alas, I was met with simplicity. Exactly as expected, there were no fireworks, no confetti cannons, no pulsing dance music at the announcement of the winner. To me and Jack, however, those mere moments of sleep-deprived beard-observing joy were all it took to make the trip worthwhile. 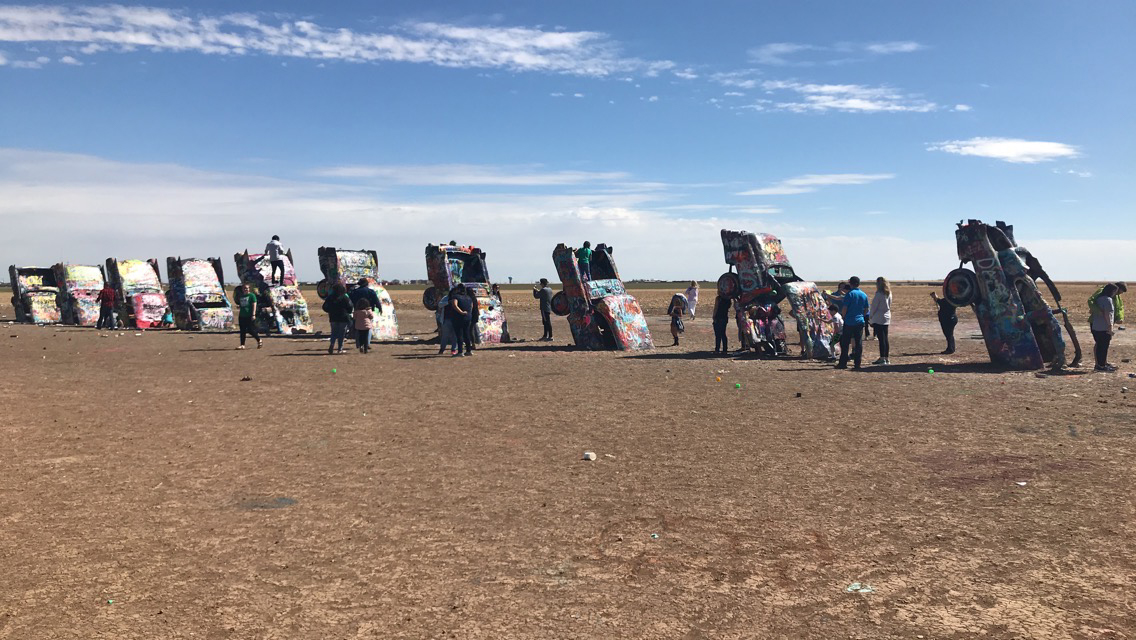 Cadillac Ranch in Amarillo allows guests to spray paint 10 Cadillacs sticking out of the ground. Photo by Julia Jones

We stayed for the parade that followed and explored the downtown area, festively green and proudly historic. Off Main Street sits a piece of the actual Blarney Stone from Ireland. Legend has it, if you kiss the stone, you’ll become a pro at flattery and wit—I, evidently, didn’t try it. Shamrock’s stretch of Route 66, featuring the U-Drop Inn, was an icon and a must-see for anyone visiting the area. Then, we headed west to Amarillo to spend the rest of our sleepless day at Cadillac Ranch (an art installation made of 10 Cadillacs with their noses stuck in the ground), Palo Duro Canyon State Park, and, finally, to the historic Amarillo neighborhood my aunt and uncle have settled into for a good night’s sleep. The next morning, we head home—school was starting back up on Monday.