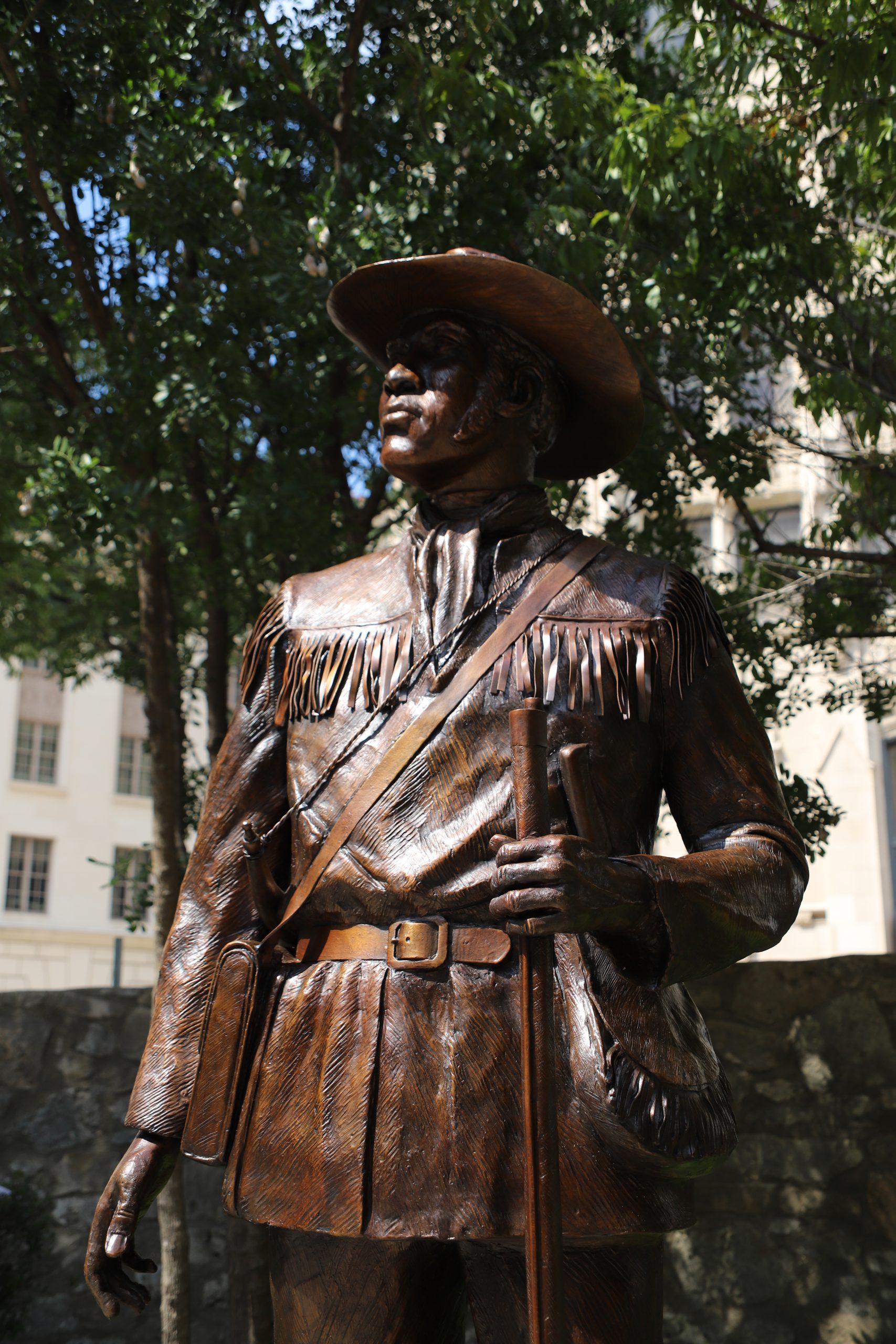 The statue of Hendrick Arnold, a guide and spy during the Texas Revolution, was created by Colorado artist Ed Dwight. Photo courtesy of the Alamo Trust, Inc.

When Lubbock-based sculptor Eddie Dixon received a phone call about sculpting a statue for the Alamo, the caller wanted to know if he was familiar with the historic figure he would be capturing in bronze. “They contacted me in 20­­15 or 2016 and asked if I knew who Emily [West] Morgan was,” Dixon says. “I said, ‘yes.’”

Her name may not be as familiar as Davy Crockett or Sam Houston, but Emily West was a woman of mixed race who played a significant role in shaping Texas history. Last month, the Alamo recognized her contributions and those of another mixed-race historic figure, Hendrick Arnold, to the Texas Revolution by unveiling the first two bronze sculptures of individuals who were of African American descent. The statues were presented at the mission’s Calvary Courtyard and represent the latest military icons to be honored at the Alamo Briscoe Sculpture Trail in San Antonio.

According to legend, West, often referenced as Emily Morgan for being an indentured servant to merchant and Texas settler James Morgan, was the inspiration of the popular folk song “The Yellow Rose of Texas,” for her allegedly slipping information about Gen. Antonio López de Santa Anna’s location to Gen. Sam Houston. Arnold, a free man who found his way to the Stephen F. Austin colony on the Brazos River, served as a spy and guide for the Texian Army. His statue was created by Colorado artist Ed Dwight, whose work can also be seen at the Texas African American History Memorial on the grounds at the Texas State Capitol.

Dixon is devoted to sharing the stories of “unsung heroes that people and time have forgotten,” he says. The artist has created works of art for the Smithsonian along with commissions in Texas at Fort Davis, in Lubbock at Texas Tech University, and in Austin at the George Washington Carver Museum, Cultural and Genealogy Center, among others.

While familiar with West, Dixon still did his research to learn more about her so he could present her in correlation to the Texas Revolution. For instance, he chose to mold her looking left because “she was in the fog of war—left is where death comes,” he says. “Time has been a hard taskmaster when it comes to things women have done in history. I try to illustrate history that was forgotten.”

Historian Sam Haynes, who teaches history at the University of Texas at Arlington, believes the new sculptures reveal hidden lessons about the Lone Star State and the Texas Revolution.

“Texas in the 1830s was one of the most diverse places on the North American continent,” Haynes says. “And we don’t really see it that way because we’ve focused on the heroic exploits of white alpha males like Davy Crockett.”

Now, that is changing as more stories emerge about the lesser-known individuals, especially people of color, who participated in these historic moments. 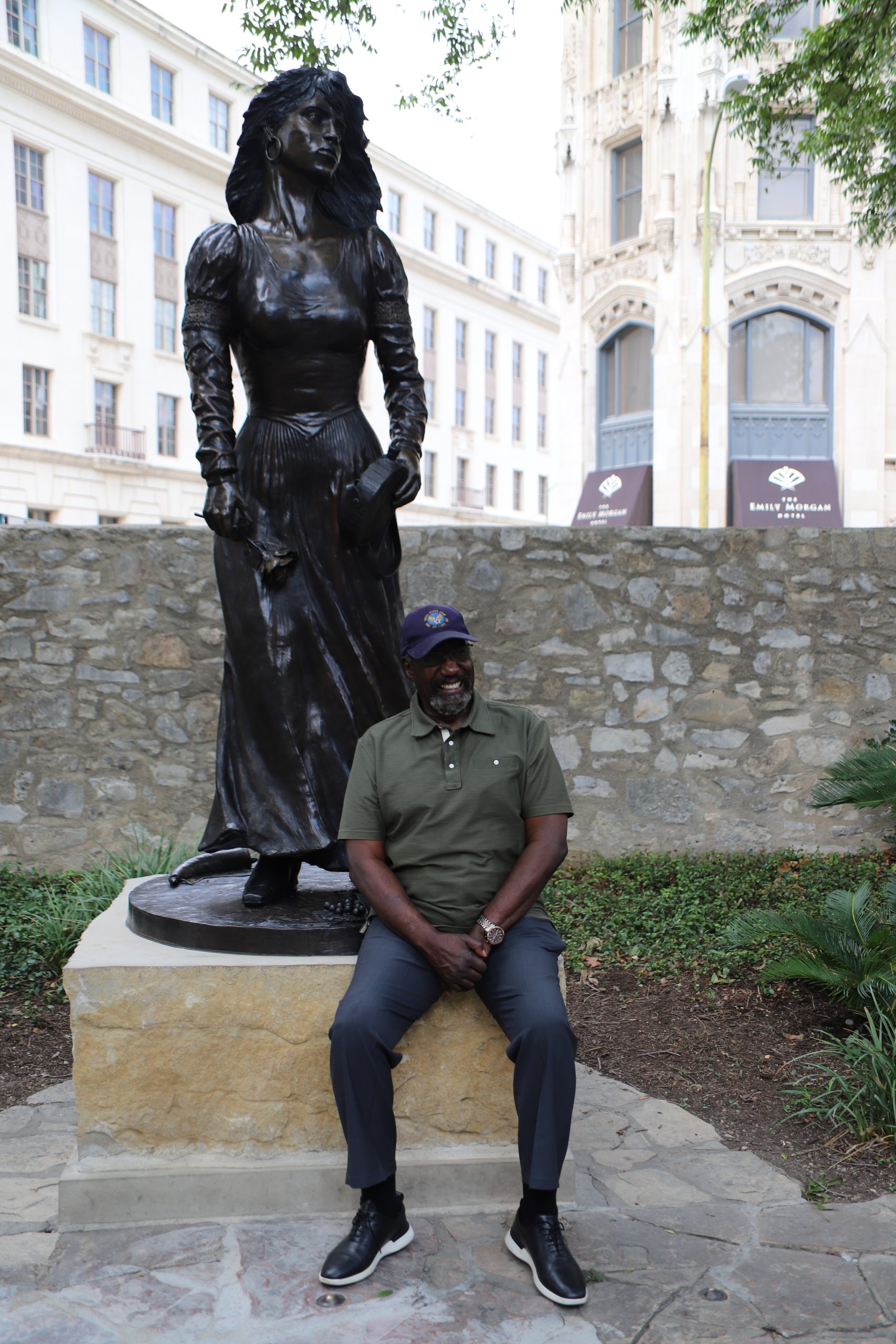 Sculptor Eddie Dixon sits at the base of the Emily West Morgan statue he created for the Alamo. Photo courtesy the Alamo Trust, Inc.

Haynes says the Texas Revolution was flooded with Black historic icons. For example, Hendrick Arnold guided the Texians and was part of several battles. Haynes, whose new book, Unsettled Land: From Revolution to Republic, the Struggle for Texas, came out earlier this year, did extensive research about the multi-ethnic Texas of the 1830s. Another Black man, Samuel McCulloch Jr., supported the Texas Revolution with his life, literally.

“He was a free Black man and the first casualty of the Texas Revolution,” Haynes says.”McCulloch was wounded at Goliad, but in the assault on the presidio in October 1835, not the Massacre, which occurred the following year. And he was thereafter known as the first Texan to shed blood in the fight for independence.”

Back at the Alamo today, spokesman Jonathan Huhn says all the statues are currently on the grounds of the Alamo (a map can be found here). Arnold’s and West’s are located north of the iconic church in the Calvary Courtyard, and are viewable daily during open hours from 9 a.m. to 5 p.m.

Eventually, all the statues will be situated along the forthcoming Alamo Briscoe Sculpture Trail. “The Trail has not yet been established,” says Huhn, adding that the trail and other proposed attractions, such as the Alamo Visitor Center and Museum, could be finished by 2026. However, Huhn says that “timeline is not definitive.” Additionally, more statues may be added to the future trail, but presently, there’s no “set number for the [future] statues,” he says.

Historian Haynes believes the new statues provide a fuller picture of the Texas Revolution. “Everyone in Texas, regardless of race, was swept up in the upheaval of revolution in the mid-1830s,” he says. “These statues serve to draw attention to the fact that people of African descent, whether enslaved or free, also played a part in the struggle for independence against Mexico.”