No Whooping Crane Festival This Year? No Big Whoop. 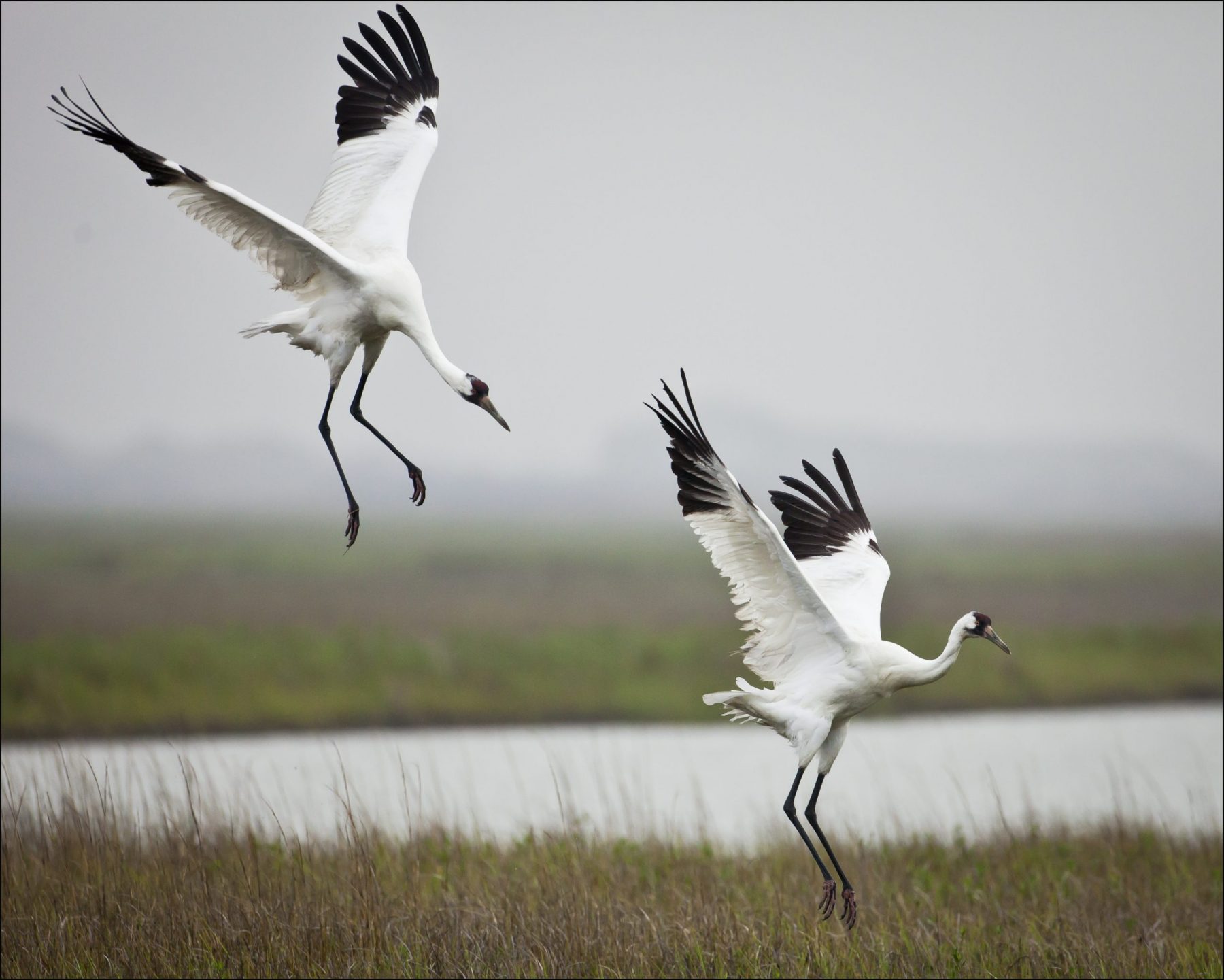 A pair of whooping cranes descends on marshland at Aransas National Wildlife Refuge.

On a cold December morning, I walked up a 40-foot observation tower at the Aransas National Wildlife Refuge to witness something spectacular. On the deck, I scanned the horizon of salt marshes, coastal prairies, oak mottes, and swales, and then finally there it was: a pair of whooping cranes grazing in shallow waters. Through my binoculars, I watched as their regal white plumage shone under the bright coastal sun—a glorious sight not commonly seen outside of this small pocket of land.

From November to March, visitors gather here on the coast to glimpse these iconic creatures. They are the tallest birds in North America, reaching up to 5 feet in height, and one of the rarest on the continent. They are also the only wild, naturally occurring flock of whooping cranes remaining in the world today. Every fall, the whoopers travel 2,500 miles from their nesting grounds in Wood Buffalo, Canada, to Texas, where they roost in marshlands in and around the Aransas National Wildlife Refuge. Typically, they are on grand display for the Whooping Crane Festival in February, though this year’s event was canceled due to COVID-19.

This was my opportunity to learn all about these winged winter Texans, an animal whose conservation success story is both inspiring and resounding. In 1941, there were just 15 whooping cranes in the wild. By 1967 the U.S. Fish and Wildlife Service had declared them “endangered.” The service’s 2019-2020 winter survey estimated the current population at 506, each a descendant of the original 15. Protecting both their nesting and wintering grounds has been pivotal to the whoopers’ growing population, as have different conservation initiatives, from habitat restoration and management to telemetry work used to track their movement. Families—generally mom, dad, and a lone offspring—defend their food base across 300 to 400 acres of wintering habitat.

“When they’re here in Aransas, the parents are teaching them everything,” said Laura Bonneau, the refuge’s visitor services manager. “They’re very involved parents.”

Bonneau grew up in Houston, where she developed an affinity for the outdoors. “I’ve always been the kid picking up bugs, digging up worms, and catching frogs,” she shared. In fourth grade she did a report on whooping cranes, and today she continues to educate others through her work at the refuge. “Big picture, I just love sharing with people and seeing people make their own connections,” she said.

In December 2021, the refuge will open a new visitor center to replace the existing facility, which sustained extensive damage from Hurricane Harvey in 2017. The new building will house administrative offices, exhibit and interpretive areas, a meeting room, an amphitheater, and a Friends of Aransas & Matagorda Island nature store.

Every year, approximately 60,000 people visit the Aransas National Wildlife Refuge, and while only 5,000 of the more than 115,000 acres are open to the public, there is no shortage of activities, from fishing to biking, kayaking to birding. There are also six miles of hiking trails and a 16-mile auto-loop tour that mazes through the property and its wide-ranging habitats. Every season brings a different group of visitors: vacationing families and anglers in the summer, hunters in the fall, and birders in the winter and spring. “We are a destination refuge,” Bonneau said. “There is always something here to see.”