Lost Gold of the Palo Duro

Rumors of buried treasure in the Panhandle= 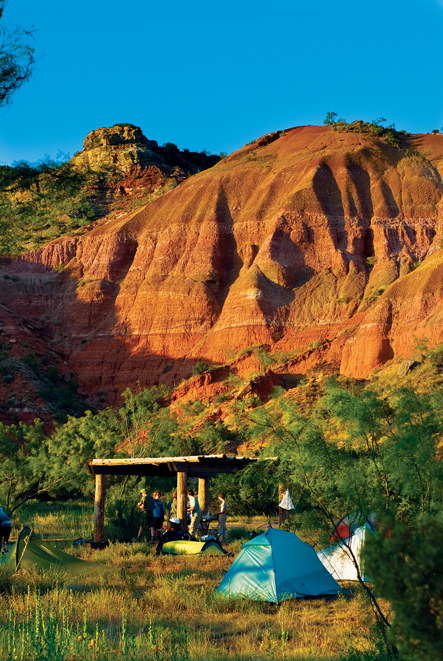 Campers in Palo Duro Canyon State Park wake up to panoramas that seem straight from the Old West. (Photo by J. Griffis Smith)

Visitors to Palo Duro Canyon State Park, south of Amarillo, might marvel at its splendid isolation and tranquility, but the setting was not always so serene. Palo Duro was the last Comanche battleground and a favorite hideout of the notorious Comancheros. Hundreds of sensational stories have rolled out of this rugged land, some of them true. One story revolves around thousands of dollars worth of gold and includes greed, murder, revenge, and grim irony—all the elements of a rip-roaring, Old West yarn. It appears to have originated with the legendary cattleman Charles Goodnight.

Bill Green, curator of history at the Panhandle-Plains Historical Museum in Canyon, says the tale is typical of the lost-treasure stories that abound in Texas history and folklore. “Goodnight was a good storyteller, and this is a good story, perfect in that everybody who would have known where the gold was had died,” says Green. “There was no one left to dispute it.”  He credits J. Evetts Haley’s 1936 biography of Goodnight with introducing the tale to a wide audience.

Goodnight’s account—via Haley—forms the crux of the story as told here. The gold in question belonged to William and Daniel Casner who, along with their father, John Casner, and their brother Lew, struck it rich early in the California gold rush. When the family left California in 1876, John and Lew began prospecting in New Mexico and Arizona. William and Daniel headed for the upper reaches of Palo Duro Canyon with some sheep and, supposedly, a thousand 20-dollar gold pieces.

That same year, about two dozen sheep ranchers from New Mexico brought their flocks to the wideopen grazing lands along the Canadian River in present-day Oldham County. One of the herdsmen was Nicolas Martinez, a former Comanchero who knew the country, and had worked with Goodnight as a guide when the cattleman made his first forays into the Palo Duro.

Goodnight expressed concern about one of the new arrivals, Martinez’s brother-in-law, Sostenses L’Archeveque, who had supposedly killed 23 people. Martinez assured Goodnight that he would take care of L’Archeveque himself if the outlaw caused trouble.

Soon afterwards, L’Archeveque rode into the Palo Duro and killed William and Daniel Casner and their Navajo shepherd in a futile attempt to find their gold. True to his word, Martinez lured his brother-in-law to a small adobe house and helped slay him in what was viewed by his neighbors as more a community service than a murder.

After hearing of William and Daniel’s death, John and Lew Casner arrived in the Panhandle in the spring of 1877 to lay claim to the brothers’ possessions, which to their dismay did not include any gold. In looking for it, they murdered Martinez because they thought he knew where it was, or was in possession of it himself.

The Casners eventually left the Panhandle, but rumors that the gold is buried somewhere in or around the Palo Duro persist. Bill Green doubts them. “We don’t even know for sure that anybody buried it,” he says. “It’s always been assumed that they did, I guess, because people love stories about buried treasure!