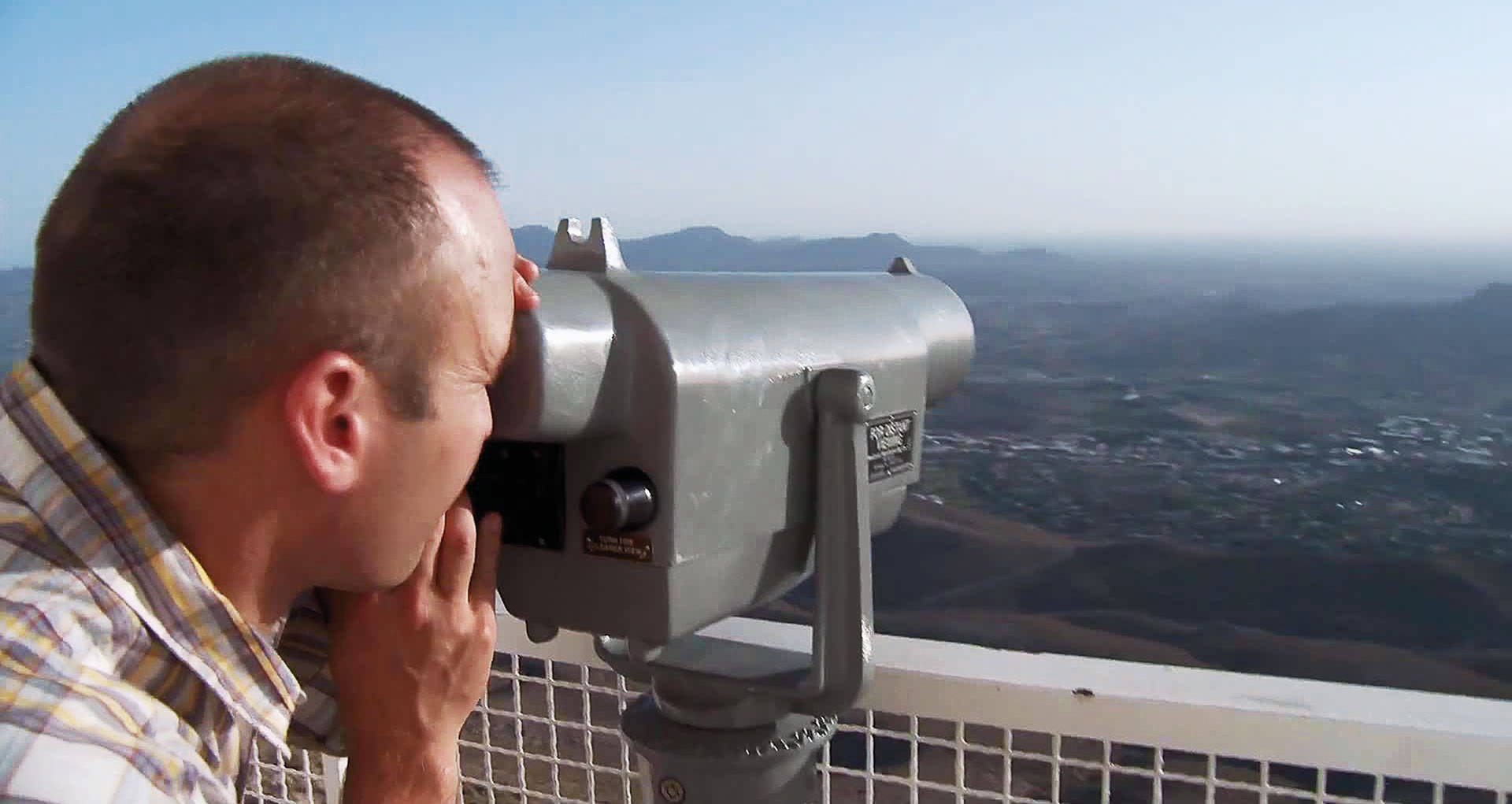 While the westernmost city in Texas may be outside the “day-trip zone” for many Texans, a trip to this border-bound metropolis is an experience as rewarding as Texas is wide. So saddle your horses and head west.

8:00 a.m. I started the day at Crave Kitchen & Bar with a massive sandwich—two bacon-flecked waffles stuffed with sausage, egg, and cheese. Needless to say, my side dish of fresh fruit was a laughable afterthought.

9:15 a.m. Before the sun came out in full force, I headed to Franklin Mountains State Park in search of a challenging, but survivable, hike. While this park covers an astonishing 40 square miles within the El Paso city limits, I set off on a .6-mile uphill journey to the Aztec Caves. I reached the top and turned around to a jaw-dropping, Chihuahuan Desert panorama of jagged mountains and heat-scorched valleys. While Aztecs never inhabited this area, I could have easily made this shady cave my home.

12:00 p.m. For an even higher view, I hopped aboard the Wyler Aerial Tramway, which offers rides up to Ranger Peak on Swiss-made gondolas. The view from the top, which covers two countries (the United States and Mexico) and three states (Texas, New Mexico, and Chihuahua), was good enough to make this Texas boy yodel.

1:00 p.m. I drove to Chico’s Tacos for deep-fried “tacos” swimming in thin tomato sauce and smothered with cheese. In all my travels, I’ve never encountered a restaurant that impassions locals quite like Chico’s. Whether for breakfast or midnight munchies, odds are this local chain will be packed. As I polished off my second order, I could easily see what keeps ’em coming back.

2:30 p.m. El Paso is truly a city that blends cultures and countries. I headed to the Chamizal National Memorial to roam the park, which commemorates a 1963 treaty that settled a 100-year-old border dispute between the United States and Mexico. It began when the Rio Grande shifted southward, leaving a portion of Mexican farmland on the Texas side of the river. Through skilled diplomacy, the countries peacefully settled their differences.

3:30 p.m. While the U.S. border mostly follows the Rio Grande in Texas, just before New Mexico it deviates from the river and heads west to the Pacific Ocean. After a brief check-in with border patrol, I headed to the point of demar-cation at Border Monument No. 1. I stood at the stately obelisk and pondered what the border means for residents of both sides. I looked up as a bird flew overhead, paying no attention to the boundary below.

4:00 p.m. For more on border history, I stopped at the National Border Patrol Museum, which honors the men and women who keep our border secure. I found the history of this ever-changing job fascinating
as I viewed the cars, weapons, and helicopters used by these brave men and women.

5:15 p.m. As the daylight faded, I hightailed it to Tom Lea Upper Park to watch the sun set over El Paso. The reds and oranges of the sky beautifully complemented the rocky landscape and city skyline. It confirmed everything I’ve ever heard about the beauty of a West Texas sunset.

7:00 p.m. For dinner, I headed to the classic Los Bandidos De Carlos & Mickey’s. While menu items such as tacos and enchiladas may look familiar, don’t make the mistake of calling this “Tex Mex,” as this
establishment serves up El Paso-style Mexican food favoring chile peppers high above chili con carne. I savored my plate of green chile enchiladas, relishing in the culinary diversity of our great state.

While Texas can officially claim El Paso as its own, it’s truly a city that defies all borders, offering visitors a one-of-a-kind mix of tasty flavors, historical experiences, and jaw-dropping adventures. So whether you follow my footsteps or forge your own path, I hope to see you on the road.