“Plogging” Might Be the Next Outdoorsy Trend in Texas

The Swedish fitness movement, a mix of jogging and picking up trash, is a new reason to commune with nature 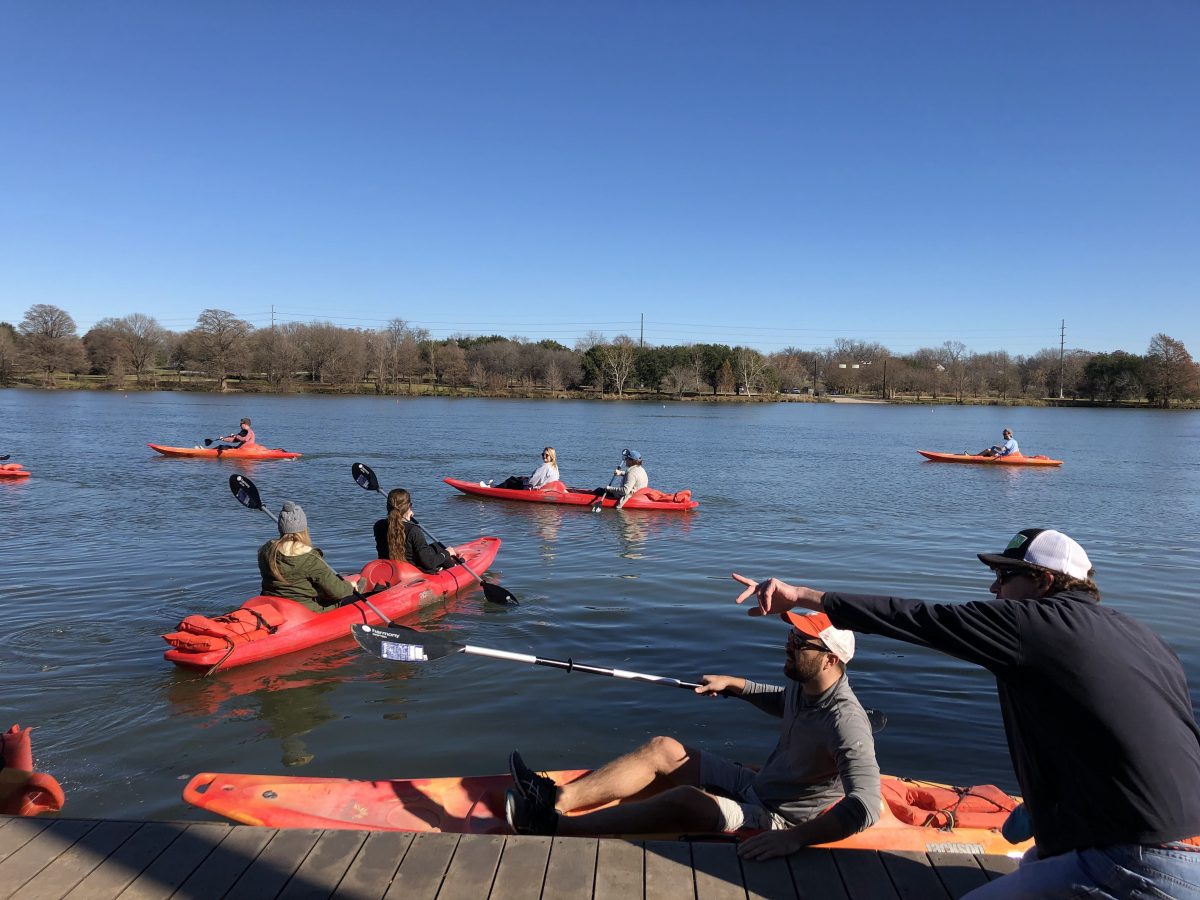 Kayaking is one of the many ways people can “plog.” Photo courtesy Water Environment Association of Texas.

There’s nothing new about Good Samaritans picking up litter while out and about in the world, but giving the activity a catchy nickname adds a whole new level of fun. “Plogging” has been gaining popularity in the U.S. within the last few years. The term comes from the Swedish word plocka upp, meaning “pick up,” and “jogging.” Plogging isn’t limited to jogging—people can plog while walking, hiking, cycling, and kayaking. Cities such as Galveston, Dallas, Austin, and Houston have already seen organized plogging events over the last couple of years.

Julie Sondecker, a digital public relations manager in Austin, began her own “trash hiking” movement a few years ago. “I came across a ton of trash on the Barton Creek Greenbelt that was left behind by Memorial Day partygoers,” she says. Shortly after, she started her @365DaysOfHiking account, where she pledged to pick up trash every day for a year to shine a light on litter and consumption problems. In May 2018, she completed the initial goal of 365 days, and extended it to 500 plogs by the end of the year. This year, she’s enlarged her goal for a third time, and is working to complete 1,000 total plogs by the end of 2020.

Tori Glick Bellos, a marketing specialist for the Boerne Convention & Visitors Bureau, didn’t realize plogging was a term when she started doing it. “When jogging in my neighborhood, I noticed the litter and found it bothersome,” she says. “On my first outing, I noticed that someone had ‘lost’ a large Styrofoam cup, so I started filling it with other litter as I went. By the time I got home, it was overflowing with trash.” She’s continued to plog, using items she finds along the way as her pickup bin. “The size of the container determines how much litter will fit in it,” she says. 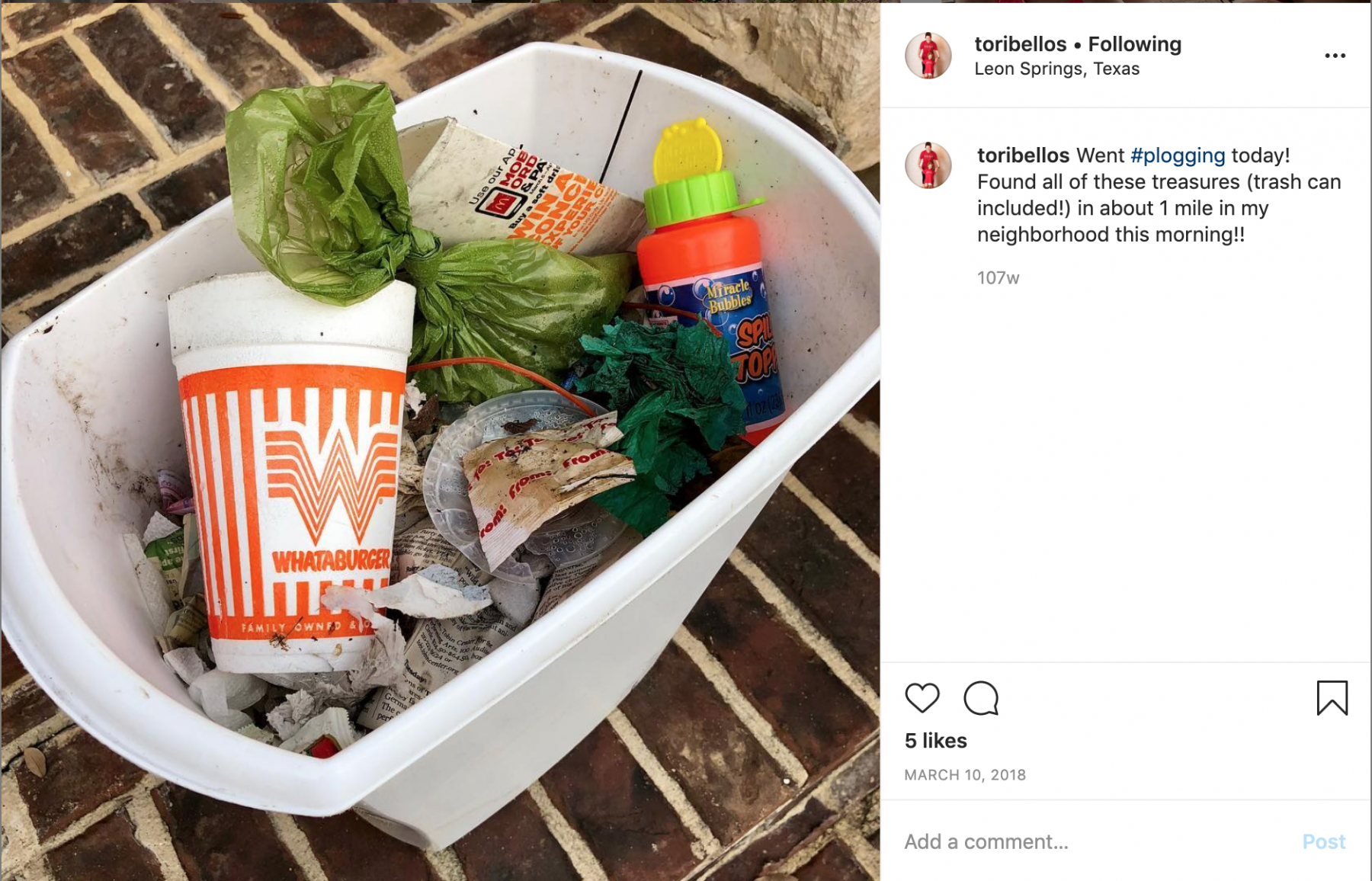 As social distancing is still suggested in many places, people are flocking to the outdoors for fresh air and exercise. Beaches, spacious parks, trails, and lakes are all great areas for plogging. Here are some suggestions on where to start, but be sure to double check if your desired destination is open before venturing out.

Keep Austin Beautiful, an organization working to clean waterways and green spaces, removes 13,500 pounds of litter and 2,000 pounds of recycling from in and around Lady Bird Lake in downtown Austin each year. Their annual Keep Austin Beautiful Day, which mobilizes 3,000 Austinites to work on more than 100 projects, has been postponed until fall 2020.

All Texas beaches are open for public use, but social distancing guidelines remain in place. Many beaches, including those in Port Aransas and Galveston, were heavily visited after beaches reopened, meaning lots of litter has likely been left behind over the last few weeks.

More than 100 miles of trails along the Trinity River make up the Trinity Trails in Fort Worth, which have remained open during COVID-19 for joggers, bikers, kayakers, and outdoor enthusiasts.

While the visitor center remains temporarily closed, all 40-plus miles of trails in the East Texas park are open. The park usually hosts monthly Flash Mob Clean-Up events, but has not been able to since COVID-19 restrictions started.