Dining and cycling on Mustang Island 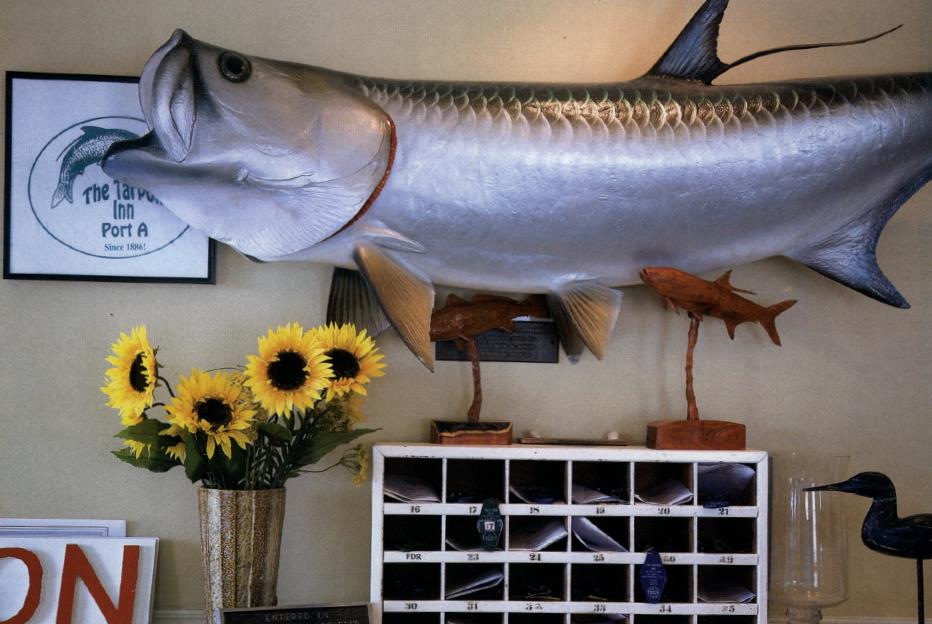 One room at the Tarpon Inn honors Franklin D. Roosevelt, who fished in Port Aransas in 1937.

My family spends a weekend in Port Aransas at least once a year, a tradition since the kids, now 16, 18, and 21, were babies. We return mainly for the beach, where we spend hours collecting shells, playing in the waves, and building sandcastles, but we also swing by the jetties to watch dolphins, browse a few souvenir shops, eat fried shrimp and fresh fish, and drop lines from a fishing pier.

This year, though, I jumped at the chance for an adults-only Port A weekend. I called my friend Stacy Oberman, packed a corkscrew and my beachcombing clothes, and headed for the ferry and the legendary Tarpon Inn.

Built in 1886, the Tarpon Inn attracted anglers hoping to land a tarpon, a large game fish once abundant in area waters. (In fact, Port A originally went by the name of Tarpon, Texas.) The Inn suffered a fire in 1900 and a hurricane in 1919, followed by reconstruction that better anchored the two-story wooden structure. Small (though well-appointed) rooms open onto wide porches running the length of the inn on both floors. The lobby sports a wall covered in tarpon scales, each signed and dated by the angler who caught the fish. We had fun searching for familiar names, including Bob Lilly and Duncan Hines (the person, not the cake mix).

For Friday-night dinner, we held court at one of nine tables at Shell’s Pasta and Seafood, whose specials that night included local blue crab cakes—delicately seasoned with a perfect balance of crabmeat and breadcrumbs. After dinner, rocking chairs on the Tarpon porch offered a great spot to relax, open a bottle of wine, and watch people come and go from the busy restaurants and bars at Fisherman’s Wharf across the street.

The beach, which stretches from the South Jetty more than 20 miles to Mustang Island State Park, ranks as the main attraction of Port Aransas, and rightfully so. But just across the ship channel lies San Jose Island, which everyone here calls St. Jo’s. Accessible only by boat, this privately-owned
island remains in a natural state—no cars, but also no amenities and no grooming. That means any trash washed up on the beach remains there, but it also means an uncrowded shore with lots of shells. Early Saturday morning, Stacy and I boarded the Jetty Boat from Fisherman’s Wharf and spent a few hours walking the beach, finding a practically flawless lettered olive and a handful of tiny sand dollars. Later, we watched green turtles paddling around the
jetty and ships plowing through the pass, dolphins leaping on their bow waves.

Port A’s small size and flat terrain make bicycles a perfect mode of transportation, and Island Surf & Kayak Shop provides beach-worthy rides as well as surfboards, boogie boards, and kayaks. While we didn’t have time this trip to kayak, owner Jeff Nicholson sang the praises of Lighthouse Lakes Paddling Trails in Redfish Bay. A series of loops ranging from around one mile to nearly seven wander through mangroves and seagrass flats, he reports, offering outstanding birding and fishing.

Tossing our water bottles, sunscreen, and towels in the bicycle baskets, we pedaled to the Port Aransas Museum, which occupies a two-story house constructed nearly a century ago. One of the few structures in town to survive the 1919 hurricane, it now showcases maps, ship models, an original
lighthouse lens, and a wealth of photos that portray area history, including the constant movement of the pass between San Jose Island and Mustang Island before engineers built jetties and seawalls to fix it in place early in the 1900s.

Suitably enlightened on Port A history, we cruised Alister Street, the main drag through town, which is lined with restaurants, boutiques, and souvenir shops. We spent some time at The Shops at Pelican’s Landing, an eclectic collection of local boutiques offering everything from clothing and purses to toe rings. Our stop also included The Art Center for the Islands, where local artists display and sell their work and frequently host workshops and receptions.

Our afternoon dolphin-watching tour on the 65-foot Mustang II departed from Woody’s Sports Center, a five-minute walk from the Tarpon Inn. The vessel, which has a covered lower deck and open upper one, turned first toward the ferry crossing, where a pod of dolphins jumped and splashed playfully. We then chugged past the Aransas Lighthouse, where the crew briefly dragged a small shrimp net Soon, they pulled up half a dozen shrimp, four small stingrays, and several little fish, including a couple of flounder, so passengers could get a closer look.

After the one-and-a-half hour cruise, we cleaned up for dinner and walked across the street to Virginia’s on the Bay. The open-air dining room overlooks gleaming boats tethered on calm water, small craft going in and out of the harbor, and ships passing in the background. I opted for a classic fried shrimp platter and cold beer, while Stacy did her best to finish a generous portion of grilled mahi-mahi and a tangy margarita in short, an ideal island evening.

We started Sunday morning at Bundy’s, where a crowd queued up for quiche, cinnamon rolls, bread pudding, Eggs Benedict, and Eggs Bundy, a messy but satisfying bowl of eggs, bacon, hash browns, and cheese. Sufficiently fueled, we biked to the beach and passed under Horace Caldwell Pier, where
anglers patiently waited for nibbles in the sea below. With the sun climbing higher, we enjoyed a final bike ride and set our sights on one last Port A meal (hey, we earned it).

Port Aransas Brewing Company sits just a block off Cotter, where the ferry line forms, and makes a perfect pre-departure lunch stop. Its hearty Stopher Burger—a thick beef patty on a fresh-baked bun, served with lettuce, tomato, pickle, onion, and perfectly crunchy sweet-potato fries—makes regular appearances on ”best” lists, and now I know why. I took half of it home; if only I’d tossed one of the restaurant’s brewed-onsite beers into the cooler, I could have enjoyed another taste of Port A that evening.