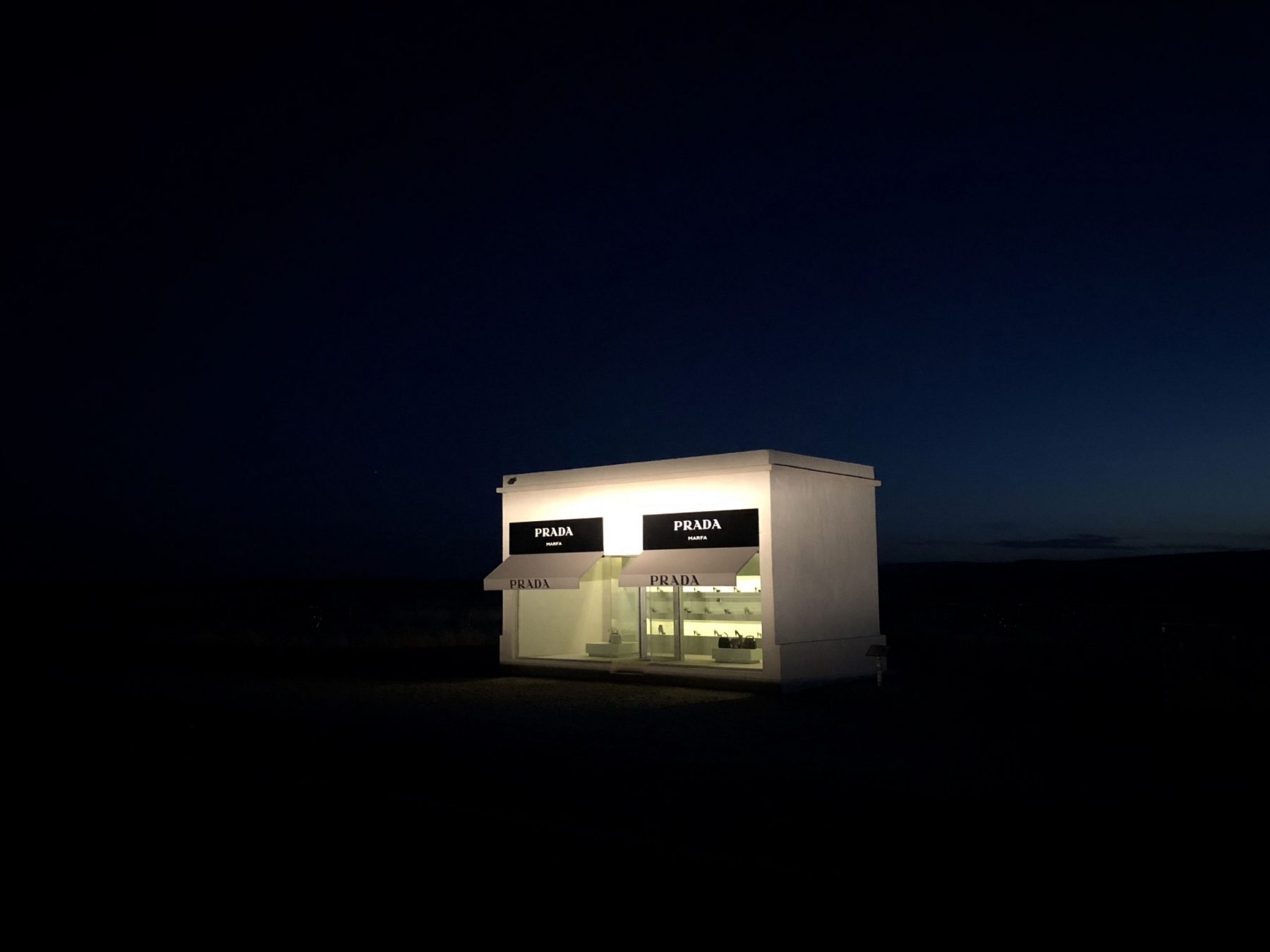 There are some fantastic bugs outside Prada Marfa at night. Courtesy Ballroom Marfa.

There’s a certain subset of people who, when I tell them I live in Marfa, get a hazy look in their eyes. “Marfa,” they muse. “That’s the tiny town in the middle of the desert with a Prada store, right?” Well, yes and no.

If you’re driving east from El Paso to Marfa on Texas Highway 90, amid a barren stretch of scrub grass and mesquite bushes, you will indeed pass by an incongruous building that, at first glance, looks a lot like a Prada store plopped in the middle of the desert. But if you pull over to take a closer look, the “store” will reveal itself as something more baffling. Inside, the stilettos and handbags on display are real Prada designs, but they seem oddly dated. The door is permanently locked, and the building is always uninhabited. 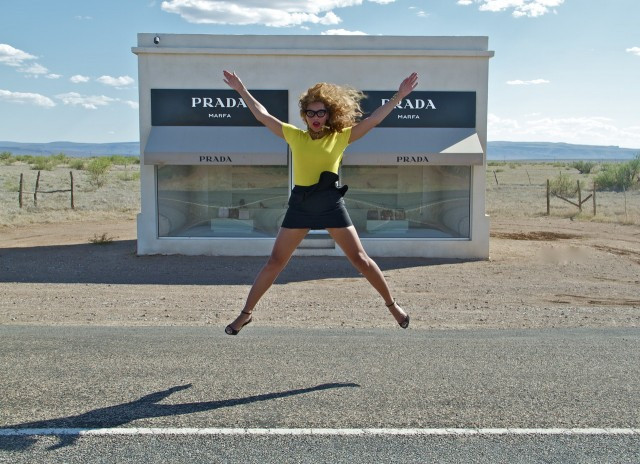 Beyoncé and her sister Solange lit up Instagram with pictures from their visit to Marfa in 2012. Courtesy Beyoncé.

Prada Marfa is not in Marfa proper, but instead a 40-minute drive west, outside Valentine. It’s also not a store, but rather a store-shaped, free-standing sculpture conceived of by Scandinavian artists Michael Elmgreen and Ingar Dragset and commissioned by Ballroom Marfa and Art Production Fund. Built 15 years ago, Prada Marfa borrows elements from pop art, minimalism, and land art. Its creators, now based in Berlin, Germany, liked the idea of placing luxury goods—donated by designer Miuccia Prada from the 2005 collection—in a context where they would seem displaced and strange. The initial plan was for the adobe building to be left unmaintained to quietly and organically settle back into the earth. Until then, it was cared for by Valentine artist and local celebrity Boyd Elder.

“Pre-social media, it was left to its own devices for a long time,” Elmgreen told Ballroom Marfa in an interview celebrating the piece’s 15th anniversary. “People didn’t travel to Valentine to see a forever-closed Prada store.” That changed with the advent of Instagram and the emergence of Marfa as a fashionable travel destination. At the start of Prada Marfa’s life, around 5,000 art tourists visited Marfa each year; last year, around 40,000 did. Instead of collapsing back into dust, Prada Marfa became a destination in its own right. Beyoncé posed in front of it, and so did The Simpsons. 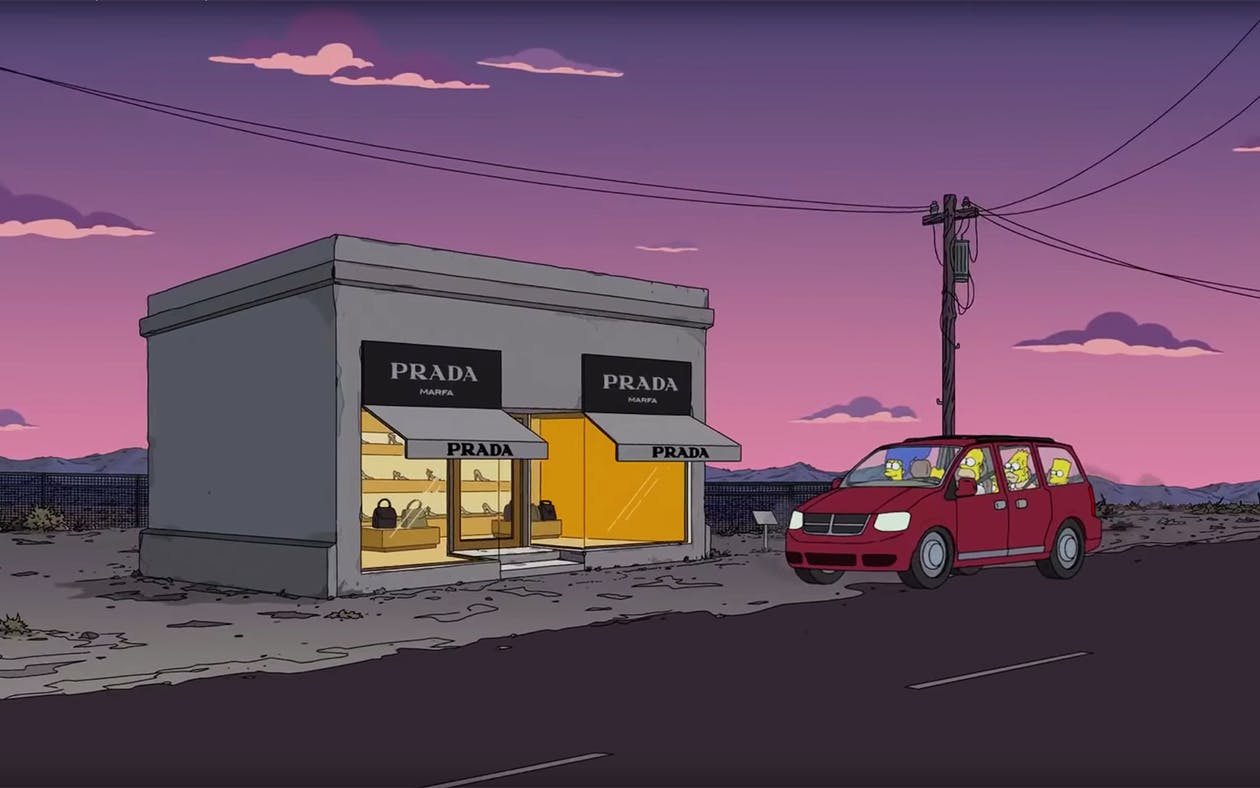 Homer forged a curious relationship with Prada Marfa in the 2019 episode “Made About the Toy.” Courtesy The Simpsons.

Prada Marfa was supposed to stick out like a sore thumb, but it seems less out of place now that Marfa itself has become something of a high-end brand name. In 2014, the Texas Department of Transportation classified Prada Marfa as a museum. The artists behind the piece are sanguine about its unexpected new life as a coveted selfie backdrop. “It’s like a teenager moving out,” Dragset told Ballroom Marfa. “You sort of lose control over it.”

Despite its ubiquity on social media, though, the sculpture maintains an uncanny allure. My favorite time to visit is late at night, when the building is as brightly lit as a showroom on a busy city street. Its glow is often the brightest thing for miles, and it attracts some fantastic-looking insects that beat their wings against the glass, trying to get in but forever locked out.