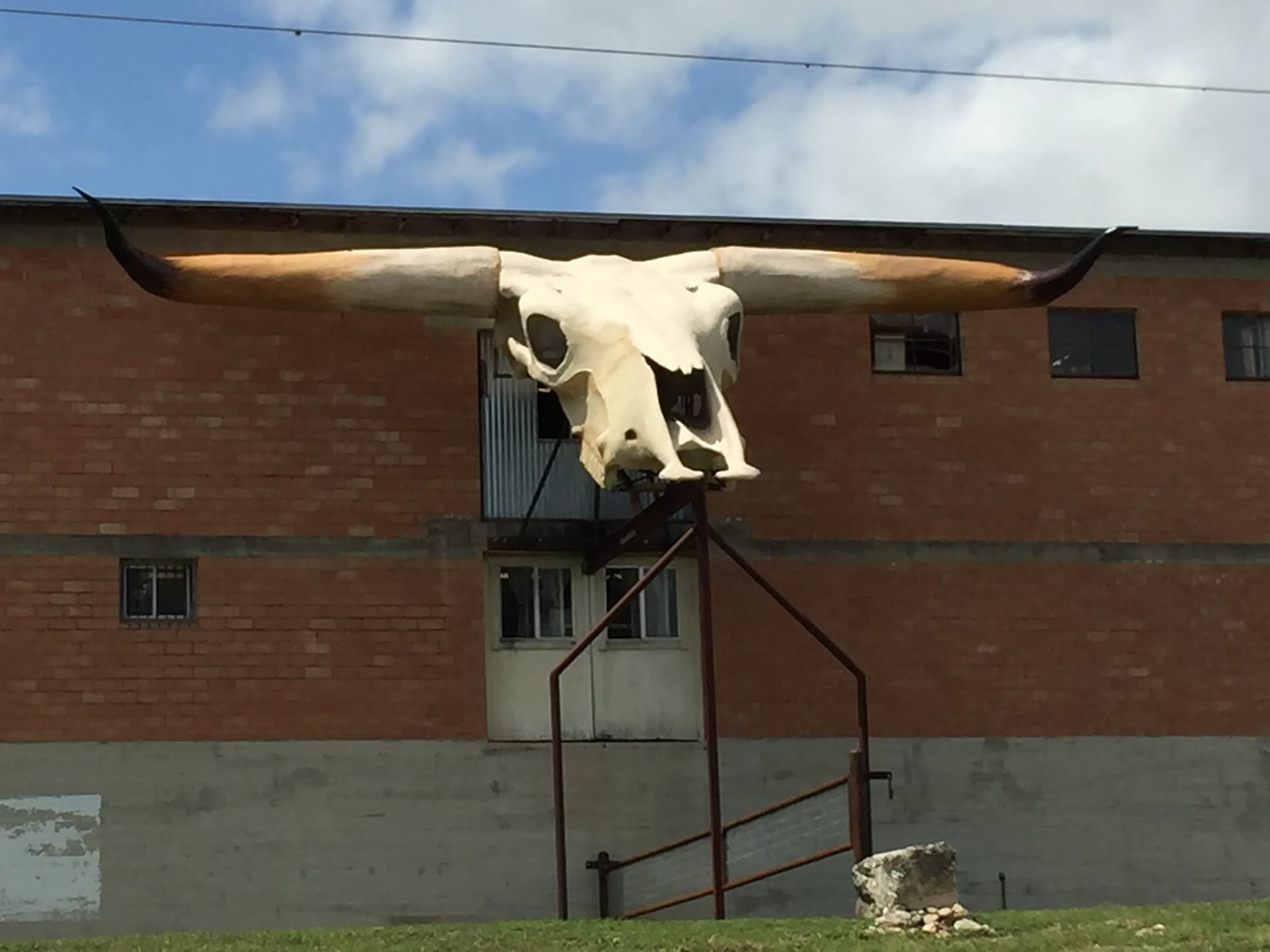 The giant Longhorn skull, located at the back of Western Trail Antiques. Photo courtesy of Rochelle and Mason Hunt.

Presiding over the southern approach to the rootin’ tootin’ cowboy town of Bandera, fixing its steady-yet-vacant gaze on the Medina River, is a giant polyurethane foam and fiberglass sculpture of a Longhorn skull. Roughly 12 feet tall and about 50 feet from the tip of one horn to the other, it’s big. Really big.

“We’ve been told it’s the largest whatever-it-is in the country,” says Mason Hunt, who with his wife, Rochelle, co-owns not just the skull, but also Western Trail Antiques, the building and business from which it is hung, and Hunt Real Estate Company. “I think there is another contender in Arizona or somewhere like that.” (And possibly a third in Odessa.)

Hunt says the skull came to Bandera from Houston courtesy of Charlotte Browning and Brian Black, the country-singing brother of Katy-bred superstar Clint Black. Upon opening a Longhorn Saloon in Bandera, the married couple acquired the skull from a two-stepping nightclub of the same name that was once housed in the former cineplex in the Bayou City’s now-deceased Northwest Mall.

In the mid-to-late 1990s, the club’s owners commissioned German-born artist Karl Koenig, a former Beverly Hills and New York City jewelry designer and painter, to make them the skull to loom over its portals. (Around that same time, Koenig found a stalwart patron in Tilman Fertitta, who commissioned Koenig to craft vast schools of life-size fish for installation in various outposts of the Landry’s Inc. restaurant chain throughout that conglomerate’s heady 1990s expansion phase. Koenig also furnished sculptures of Beatles-style yellow submarines at the Hard Rock Cafe in Singapore and Acapulco.)

Hunts recalls that Black and Browning never quite got around to mounting the skull at their Bandera saloon, though they did regularly put parts of it on dramatic display.

“They had the horns mounted on a trailer, and they would show them off at various parades through the year,” he says. “Fourth of July, Mardi Gras, things like that.” 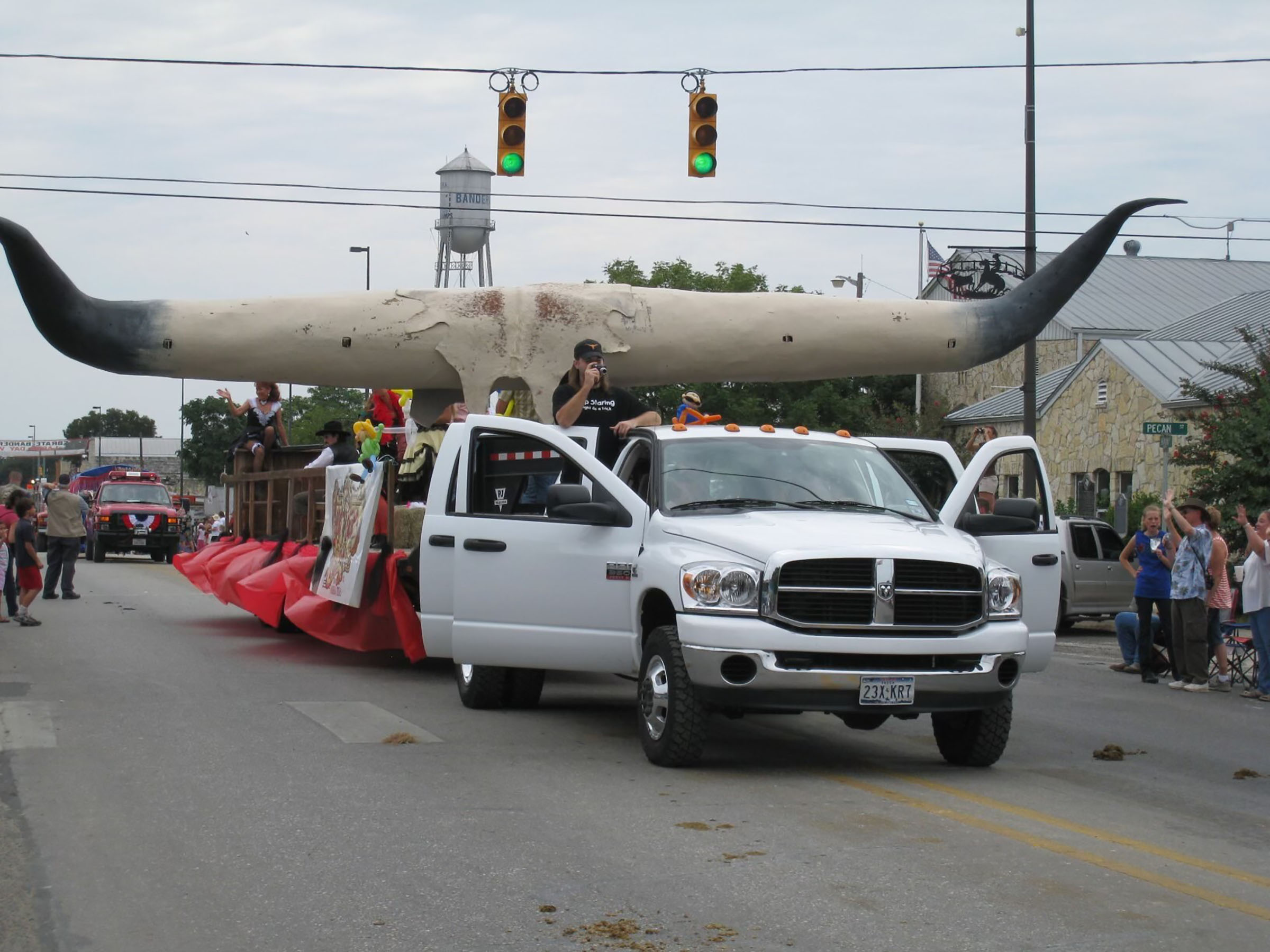 The Longhorn skull on display in a parade in Bandera. Photo courtesy of Rochelle and Mason Hunt.

They would also lay the horns lengthwise on the trailer before dramatically unfurling them at a key point in the parades. “When the truck would turn up Main Street, they would let them out, and they would literally extend from one sidewalk to the other,” Hunt remembers.

“People always looked forward to that,” Rochelle says. “It was the big wow moment of the parades.” She adds that Browning would also decorate the horns to suit the occasion, be it the Fourth of July, Veterans Day, Memorial Day, and so on.

The couple were unaware that the horns came with a skull until Black offered to sell them the complete ensemble upon the closing of the Longhorn Saloon about four years ago. “When I saw them with the skull, I thought, my God, that thing’s huge,” Hunt says.

Luckily, they happened to have a wall big enough to display the work in all its grandeur: the Maple Street-facing rear of Western Trail Antiques, whose front is on Main Street. “We thought it was a good fit with the name of the business,” he says. “We thought it would be a good way to draw people into the business.”

Rochelle points out the antique mall—housed in the Carmichael and Hay building, Bandera’s original mercantile emporium—does stand adjacent to the Western Trail of cowboy lore. Also known as (among other names) as the Great Western or Texas Trail, the Western once extended from the Rio Grande to Dodge City, Kansas, and beyond—even into Canada before it was all over in the early 1890s. Blazed by Texas cattleman John Lytle in 1874, the Western replaced the more widely renowned Chisholm Trail as settlement pushed the frontier west. For the last years of the great cattle drives, the Western was the main thoroughfare north.

As the hub of a region dotted with dude ranches, Bandera attracts its share of the very greenest of greenhorns, some of whom find their way to Western Trail Antiques.

“We have literally been asked by a couple of people if that is a real Longhorn skull,” marvels Rochelle.

If you do find yourself in Bandera, you’ll discover the town is not all cowboy lore and monster movie-size Longhorn heads. Residing catty-corner to Western Trail is the Old Spanish Trail restaurant. While its decor is a hyper-Western homage to John Wayne, I find its signature dish is its delicious cheese enchiladas—to my taste, some of the best on the planet and worthy rivals to the beloved enchiladas served in San Antonio public schools.

And when you think of Bandera you don’t often think of pretty churches, but the historic St. Stanislaus Catholic Church is in the same league as the Czech and German Painted Churches between San Antonio and Houston. Built in 1876 by former residents of Panna Maria, Texas’ and America’s first Polish settlement, St. Stanislaus is the nation’s second-oldest Polish congregation. The austerity of the church’s native limestone exterior belies its light and airy interior, where under a sky blue vaulted ceiling, a Faberge egg-like altar presents a distinctly Old World feel.

The adjacent cemetery is a playground for blackish, burrowing rock squirrels, a critter that acts more like a prairie dog than the tree squirrels known to us farther east. It’s a nice place where you can sit and contemplate and avoid overindulging at the town’s saloons to the point you begin to believe in the existence of Texas-size mega-Longhorns.