Menacing in size and appearance, the sculpture has become a welcome presence in the Rio Grande Valley 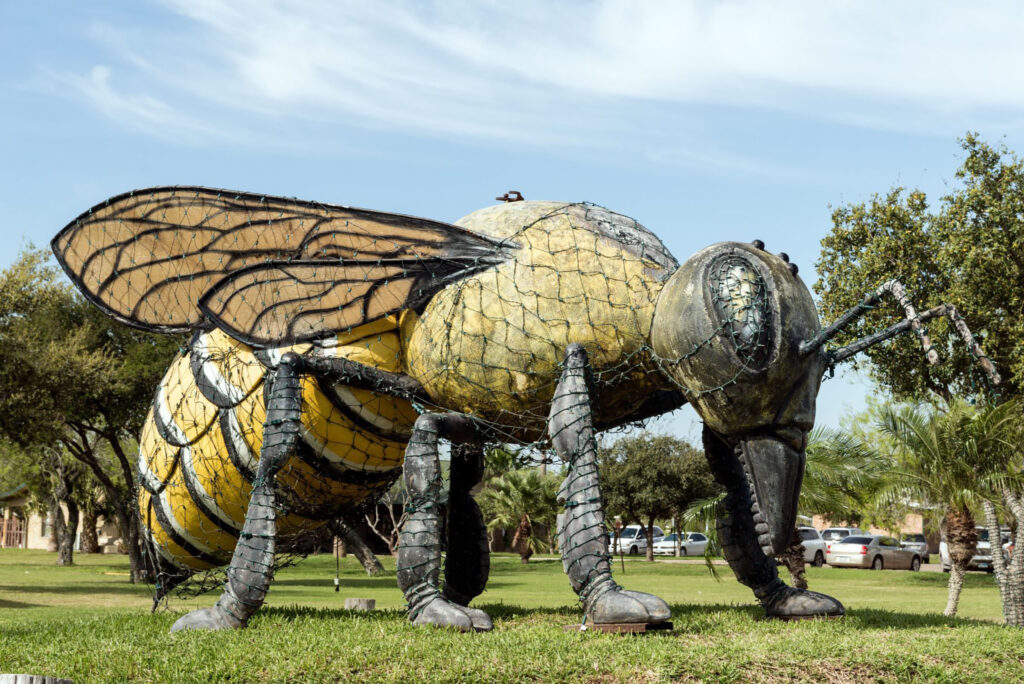 The Killer Bee of Hidalgo, commissioned by the city for $20,000 in the early 1990s, today resides at City Hall. The Lyda Hill Texas Collection of Photographs in Carol M. Highsmith’s America Project, Library of Congress, Prints and Photographs Division

There’s a line in Act IV of Hamlet, where Claudius says to Gertrude, “When sorrows come, they come not single spies, but in battalions.” Change the word “sorrows” to “bees,” and while the result may be an unpopular sentiment among Shakespeare scholars, it will assuredly resonate with people who have faced down the threat of a swarm of killer bees. People like the residents of Hidalgo.

Located across from Reynosa, Mexico, in the Rio Grande Valley, Hidalgo has a rich, multicultural history and a vibrant community. It has two of the largest annual events in South Texas: the music, culture, and heritage festival Borderfest and the holiday show Festival of Lights, which opens Dec. 1. Also, it’s home to the daytrip-worthy Old Hidalgo Pumphouse Museum & World Birding Center.

But in terms of the town’s enduring iconography, it is going to be hard to beat the 2,000-pound Killer Bee statue that inhabits the entrance to Hidalgo’s City Hall. How did this large insect sculpture come to stand in Hidalgo? And perhaps more importantly, why?

The buzz started in 1990, when the first colony of “Africanized” killer bees was found to have reached the United States via Brazil—the outcome, literally, of a scientific experiment gone wrong. The bees decided to settle just outside of Hidalgo upon arrival, where news of the event provoked widespread panic among many, and for Hidalgo, threatened to undermine the strong community spirit for which the town is known.

In a flash of inspiration, the Chamber of Commerce, led by director Joe Vera, approached then-mayor John Franz (who retired in 2012 after over two decades at the helm of Hidalgo) about turning an occasion that might have been swept under the proverbial rug in a lesser community into a bold symbol of resilience. “We need to put Hidalgo on the map,” Franz told the Houston Chronicle in 1993. And the gears of the merch machine began to spin.

The Killer Bee of Hidalgo, or “The World’s Largest Killer Bee,” as it’s advertised, was commissioned for $20,000 by Mayor Franz and the City of Hidalgo, with sculptor and roadside attraction manufacturer Jerome Vettrus of Sparta, Wisconsin, constructing a to-scale replica of the menacing insect. The black and yellow sculpture itself is made of steel overlain with a fiberglass exoskeleton. The whole creature reaches to about 10 feet tall and 20 feet long, not including its ominous antennae.

Initially, the Killer Bee of Hidalgo was a mobile phenomenon, enjoying a tenure among various floats and festivals throughout the state to promote the city of Hidalgo. Now ensconced at its City Hall location, the bee still makes appearances every year at Borderfest.

Suffice it to say, Hidalgo, the self-proclaimed “Killer Bee Capital of the World” embraces just about every aspect of its claim to fame, with T-shirts, postcards, and other merchandise emblazoned with images of killer bees to be had all over town. All reminders that when killer bees come to Texas—whether they be single spies or in battalions—the people of Hidalgo are ready.