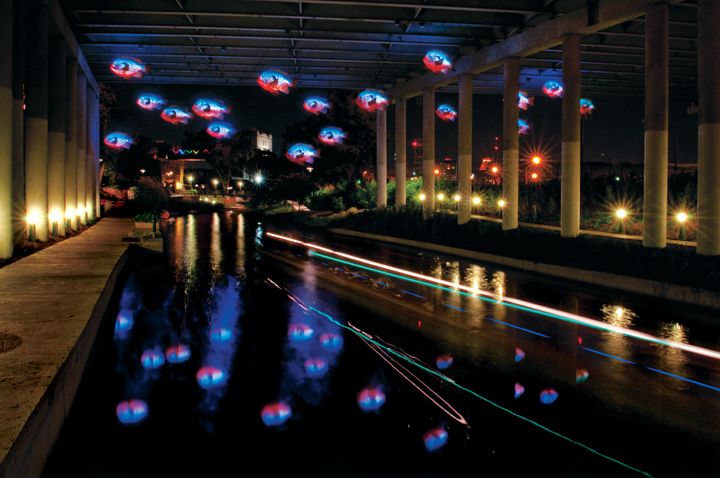 Artist Donald Lipski’s colorful installation, F.I.S.H., suspends 25 orange-and-blue fiberglass sunfish beneath an I-35 over­pass, where they glimmer at night. (Photos by Randall Maxwell)

When I travel, I enjoy interacting with the locals as much as with fellow visitors, so I’m excited about the River Walk’s latest expansion. This project extends river-level pedestrian (and river taxi) access about 1.5 miles upriver to the renovated Pearl Brewery site, but more significantly, the extension draws together two distinct personalities of the river (and of San Antonio). 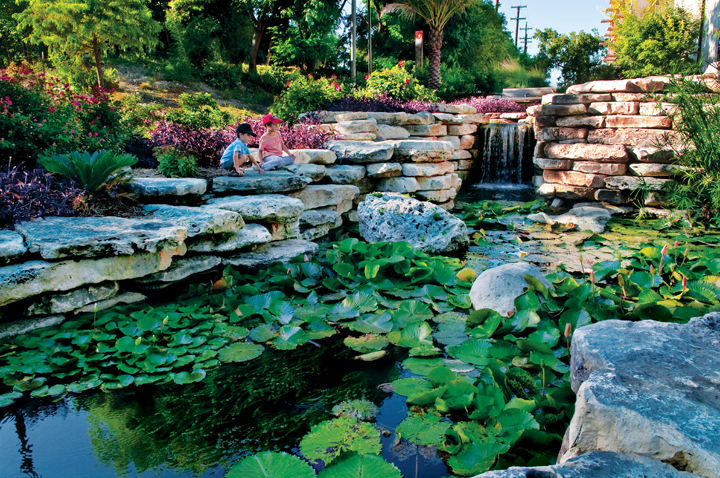 One stop along the way fea­tures a grotto designed by Carlos Cor­tes and enhanced by colorful gardens and water plants.

In contrast, the new stretch—called the “Museum Reach” section because it affords river access to the San Antonio Museum of Art—seems tranquil. There are no plans for river-level businesses, and the native landscaping (overseen by the San Antonio River Authority with advice from the Lady Bird Johnson Wildflower Center in Austin) affords color and texture year round, simultaneously attracting yellow-crowned night herons, butterflies, and other wildlife. In some spots, your only company might be a trio of ducks or a heron stealthily stalking breakfast in the water. The new extension’s park-like character entices residents and visitors, just as it creates a dynamic sense of community—complete with public artwork, bicycle and dog-walking access, and a vibrant Saturday-morning Farmer’s Market at the Pearl.

I visited this new stretch of River Walk in November 2009, shortly after the expansion’s ribbon-cutting. But I hadn’t seen it at night, when many of the artworks on the river change character and take on new identities through illumination, and I hadn’t enjoyed the river-barge journey upriver via the Lock and Dam. So on a recent weekend, I returned to San Antonio with my husband to experience a fuller sampling of what the new expansion offers. 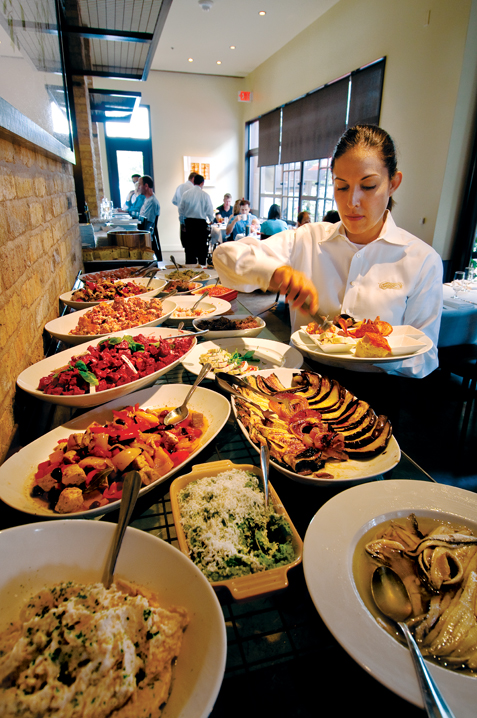 Our first stop: the dramatic Pearl Brewery site, aka “Pearl,” which ceased its brewery operation in 2001 after more than a century of making beer. The Pearl’s campus of repurposed brewery buildings—the stable for horses that pulled delivery wagons, a bottling warehouse, recycling center, and other structures—lies at the northernmost navigable point of the San Antonio River. Today, the 22-acre complex is rapidly evolving into a center for shopping, dining, living, and learning. Anchored by one of three campuses of the Culinary Institute of America, the Pearl already draws an eclectic mix of businesses and nonprofit organizations. The Nature Conservancy of Texas offices are here, along with the American Institute of Architects’ Center for Architecture; both offer lectures and photography exhibits among a list of periodic attractions for the public.

In the brewery’s Full Goods Building, which once served as the distribution center, an independent bookstore called The Twig specializes in Texana and books for children; next door, cookbook author Melissa Guerra’s namesake housewares shop carries all manner of culinary implements, including many hard-to-find items from Latin America. (This is the place to find authentic Mexican molcajetes along with paella pans, hand-embroidered dish towels, and mesquite rolling pins from northern Mexico.) Nearby, Chef Andrew Weissman’s restaurants Il Sogno and The Sandbar offer intimate dining spots for creative Italian fare and seafood, while a new venture called La Gloria Ice House introduces diners to savory dishes often found in the street stands of Mexico’s cities.

“The CIA campus here offers a great opportunity to shine new light on Latin American cuisine—which is unbelievably complex and often underappreciated,” Melissa Guerra told me. In fact, with a recent expansion of CIA programs and the addition of culinary classes for “food enthusiasts,” layman cooks like me can learn techniques in commercial kitchens usually reserved for aspiring professional chefs.

The lunchtime line outside CIA graduate Johnny Hernandez’ La Gloria Ice House, one of the Pearl’s newest (and busiest) restaurants, moved quickly, and soon it was our turn to order at the counter. Hernandez focuses on the street foods of interior Mexico-tacos, ceviches, tlayudas (what Hernandez calls “Mexican pizzas”), Mexican sandwiches called tortas, and various representations of gorditas and tostadas—all stuffed, filled, or topped with traditional ingredients like shredded beef, marinated fish, and citrus-marinated pork.

We ordered a sampling of mesquite-grilled fish tacos, ceviche made with tomatillos and green olives, and one of La Gloria’s vegetarian options made with sauteed green beans and carrots, queso cotijo, and a rich mole sauce. We then settled at a mist-cooled table on the patio, where we enjoyed a view of the landscaped riverbank to our right. When we looked to our left, we watched construction cranes assemble new loft apartments like so many Tinker Toys near the old brewery building. Soon, we hoisted glass bottles of fizzy Topo Chico mineral water in a toast to the fascinating development project, which honors history as it creates a new environment for today’s community.

San Antonio excels at that, I’d learn. I later visited with Steven Schauer, who leads tours of the new Museum Reach and oversees community relations for the San Antonio River Authority, one of several private and public entities that combine forces to improve the river experience.

It turns out that the Museum Reach project is the first of several expansion projects now on the River Authority’s drawing boards. The River Authority partners with the San Antonio River Foundation, the U.S. Army Corps of Engineers, Bexar County, and the City of San Antonio.

”We’re already working to extend the riverfront trails to Brackenridge Park as part of the Museum Reach section,” Schauer told me. “But we’re also working on the ‘Mission Reach extension; which by 2013, will create a pedestrian pathway south of downtown, an eight-mile trail connecting all four of the city’s historic missions. We’re going to great lengths to plant trees, sow native grasses and other plants, and restore the river to a more natural state. Eventually, you’ll be able to start at Brackenridge Park, near the zoo, and walk along a trail system to the Pearl and the San Antonio Museum of Art, through the downtown commercial district all the way to Mission Espada—a 15-mile, linear park through the heart of San Antonio.”

But first things first. My husband and I had booked aroomfortheweekend at the recently refurbished Holiday Inn El Tropicano, which overlooks the river at the Lexington Street Bridge, the official beginning of the new Museum Reach promenade. The hotel’s festive, Miami-inspired lobby and pool area (think brown-andwhite glass tiles, toucans in floor-to-ceiling cages, and Celia Cruz over the sound system) belies the no-frills rooms, but the central location wins points, and the hotel-popular with families and conventions-often offers special package deals.

Outside the hotel, at river level, we spied our first piece of River Walk artwork-a restored 1930s tile mural of a Mexican street scene, which once was commissioned for a relative by New Deal congressman and San Antonio mayor Maury Maverick, who spearheaded the River Walk’s development in the late 1930s. For the Museum Reach project, the San Antonio River Foundation commissioned more than a million dollars worth of new public art to embellish this stretch. A few strides away, beneath the Lexington Street Bridge, Martin Richman’s Shimmer Field offers a glimmering, fluttering sculpture of “light chimes” that incorporates hundreds of strips of acrylic.

We pIanned dinner at II Sogno, James Beard Award-nominee Andrew Weissman’s new Italian restaurant at the Pearl, and so with dusk approaching, we phoned for a pickup by a Rio San Antonio Cruise water taxi. When the open-air boat arrived 20 minutes later, we joined a barge-load of tourists and San Antonians headed upriver, and we found surprises around nearly every corner: Suspended panels beneath an overpass morphing from pink to purple to blue as the light changed, fiber-optic paint creating optical illusions, handrails resembling abstract interpretations of nature, and other subtle pieces that rewarded observant eyes.

At the Lock and Dam, a small-scale engineering marvel similar to the one used to raise and lower ships through the Panama Canal, cameras clicked as our driver guided our boat into a large chamber (called the lock), secured the door, and allowed the lock to gradually fill with water, raising the barge some 10 feet so we could continue our journey. (The ride through takes about five minutes.)

Approaching the San Antonio Museum of Art and the Jones Street Bridge, a melodic chorus of nature sounds-birdsong, frog and insect serenades, splashing water-dominates the atmosphere, and our guide tells us that this is a “soundscape” called Sonic Passage. This delightful effect springs from the mind of ambient artist Bill Fontana, who recorded hundreds of sounds on the river and edited them together to “wash” visitors with sound. A little farther north, Donald Lipski’s wry F.I.S.H installation—a school of 25 orange-and blue fiberglass sunfish, each seven feet long and lit from within at night—”swims” suspended beneath the I-35 overpass. (A 26th fish is on display indefinitely at the San Antonio Museum of Art.) Far below the fish, visitors take in lush landscapes ofkoi ponds, golden stands of grasses, and blooming lantana, sage, and blue salvia. A little farther on, approaching the Pearl, concrete artisan Carlos Cortes’ whimsical Grotto pays homage to the faux bois creations of his father, Maximo Cortes, who worked with famous faux bois artisan Dionicio Rodriguez.

Our dinner that night at II Sogno, a restaurant known for its innovative menu as well as for diligently operating according to rules of environmental sustainability, was magnificent. The menu features such dishes as spaghetti with balsamic-marinated quail, skewered monkfish with scallops and green olives, and house-made gnocchi in rabbit sauce. We chose to share a composed salad of octopus, citrus, fennel, and mint; a rich osso buco with Parmesan risotto; and lobster-and-mushroom ravioli. We challenged our sommelier to suggest a wine to complement such disparate flavors, and he suggested a Fiano di Avellino from the southern Italian region of Campania.

The next morning, we returned by boat to the Pearl for the Saturday Farmer’s Market, where more than 30 vendors from a 150-mile radius around San Antonio sell baked goods, nuts, eggs, seasonal produce, cheese, herbs, candy, spices, and a selection of meats. We stopped one more time at La Gloria for a snack before driving home, and when a waiter brought a tremendous molcajete full of bubbling queso and green chiles to the table next to us, I couldn’t resist quizzing the diners about the selection. They quickly dished up a sample for us.

That moment of sharing seems to characterize the new River Walk extension: the chance to become friends breaking bread at the table of shared experience. And that’s what the River Walk continues to bring to San Antonio-a sense of connectivity and community.