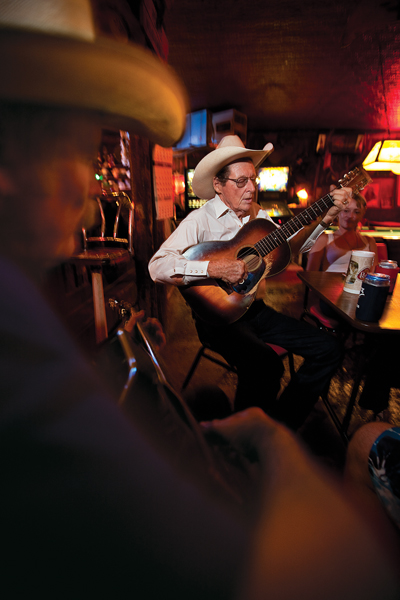 It’s 11 a.m. on a Saturday, and I’m sitting with Arkey Blue at Arkey’s Silver Dollar, a storied dance hall in the basement of Bandera’s General Store. Shafts of sunlight shine through the open back-alley door onto the sawdust-strewn floor, and a barkeep empties ashtrays and flips a cloth over the old wooden bar. A few customers nurse the day’s first longneck as the jukebox softly plays country hits about hard times and heartache.

Arkey is Arkey Charles Juenke, one of the characters that defines Bandera’s honky-tonkin’ image; he’s gone by Arkey Blue since he started playing guitar and writing songs as a teenager in the 1950s. When he bought the Silver Dollar in 1968, the place had already taken decades of abuse by boots and bottles.

“It was a mess;’ he says. Blue soon expanded the dance floor and redecorated in a musician-packrat’s esthetic. Today, the walls are so festooned with posters — handbills from performances at the Grand Ole Opry, photos of Elvis Presley, Willie Nelson, John Wayne, and the like — that it’s hard to know where to look. Christmas lights illuminate the crowded bandstand, where Blue and his house band play on weekends.

Bandera’s appeal has long been rooted in its reputation as a cowboy town. I visited in late summer, a season when in years of normal rainfall, crowds tube the cypress-lined Medina River or ride horses at one of the area’s dozen or so dude ranches. But this has been no normal year, and the drought—and the heat—caused me to alter my plans. I chose to explore Bandera’s compact downtown, where I could mosey from dance hall to beer joint to smokehouse without breaking a sweat—even in 100-degree heat.

With the no-frills-but-comfortable River Front Motel as my home base, I rummaged through an antiques shop; drank beer with garrulous strangers named Smiley and The Dude; ate tangy chicken wings by the bluish glow of a Coors Light sign; and savored seared salmon from the repertoire of a chef influenced by Alice Waters and Julia Child. I puzzled over a serpent made of postage stamps. I slurped a root beer float in Bandera’s old mercantile while two teenage employees reapplied lip-gloss and texted their boyfriends.

I met a lot of characters. I’m learning that Bandera’s heart thumps to a distinctly irregular beat.

Friday night, I watched the Silver Dollar in its typical Friday-night rhythm. A couple and their herky-jerky kids romped the dance floor along with dancers for whom the cowboy waltz seemed as natural as breathing. The house band played until around 2 a.m., a crew of regulars played pool (the full-moon imprints of tobacco tins visible on their back pockets as they leaned in to take a shot), and most everyone put away a few Lone Stars or mixed drinks from bottles they’d brought in. The no-smoking ordinance that applies in many cities shows no sign of approval here in Bandera.

But when the sawdust settles and the sun comes up, the place looks no worse for wear and tear-better, perhaps. In the daylight, you can see the Dolly Parton pinball machine, the shrine to Blue’s favorite dog, Sidney G. Shepherd, and the nicked-up wooden table where Hank Williams Sr. carved his name after a show at Bandera’s still-active Cabaret Club.

“I like it when out-of-towners come in,” Blue tells me. “Lots of ’em come down the stairs and start grinning. And then lots of ’em come halfway down and turn around and go back up.”  I’m learning that Bandera’s heart thumps to a distinctly irregular beat.

Take the Old Spanish Trail Restaurant, for example. Originally a grocery store, it has been a restaurant since 1921. Between the main dining hall (where tourists pose astride saddles beneath the mounted head of a trophy elk), and the John Wayne Room (the former horse corral, now decorated with photos of The Duke and other Western icons), a chuck wagon has been retrofitted as a buffet, laden with beef ribs, potato salad, beans, bread, and Jell-0. Other days of the week usher in all-you-can-eat spreads of pork chops, barbecued chicken, or enchiladas, the latter covered with classic Tex-Mex chili gravy and yellow cheese, with a sprinkling of diced onions.

I wouldn’t call the food at the OST exceptional, but it’s one of those places you go for the view-a glimpse of the men and women who populate Bandera on any given day. They’re a curious mix of ranch hands, motorcycling sightseers, and dude-ranch tourists with the bowlegged gaits of city-dwellers who wish they’d bellowed ”Whoa!” before Silver took off in a trot.

In the first decades of the 20th century, nobody had his finger on the pulse of Bandera more than Frontier Times magazine publisher J. Marvin Hunter, who also chronicled frontier history and lore for more than a dozen newspapers, including the Bandera New Era. Not only did Hunter collect stories, he also collected curios and relics his readers sent him. His items eventually so obstructed his office space that in 1933, he opened a museum to house them. After a short walking tour of downtown, I peek inside the old stone building and discover such an array of bizarre and fascinating memorabilia that I can’t help but ponder the nature of collecting in general. How is it that someone thought to send Hunter a boxed pair of dressed fleas, or a preserved turkey heart, or a map of Texas made of snake rattles—and Hunter felt compelled to keep and display them?

Curator Rebecca Norton recognizes the challenge of interpreting the items for visitors. “If it was interesting to the person who was giving it to him, he thought it would be interesting to anyone,” Norton said of Hunter. “So the collection is very much like the old cabinets of curiosities—you might find a lock of hair next to a shawl that belonged to one of Prince Carl of Solms-Braunfels’ original colonists.”

Norton’s first job was to inventory the some 40,000 items, and next, to use the artifacts to tell stories-something she thinks J. Marvin Hunter would have appreciated. “I hope to keep the character of the museum but still convey the history of Bandera,” she says.

As rooted in frontier lore as Bandera is, though, I sense a gentle shift toward a more multifaceted identity, even along Main Street. A venture called Dogleg Coffeehouse has opened up in a restored 1875 bank building, where trained baristas pull espressos and cappuccinos, and where you’ll find local art on display, local poets reading their work, and occasional live jazz or folk music. Around the corner, retail veteran Melissa Benge stocks her store, Gunslinger, with what she calls “eclectic cowboy couture.” Think beautiful hand-tooled boots, belts, and hatbands; stamped you’ll find creative decor and eclectic, Western silver jewelry inlaid with stones; Porter Wagoner-style “show shirts” with embellished yokes and pearl-snap buttons; plus designs for both men and women that have a touch of Western flair but won’t look out of place in the city.

And on the outskirts of town, at a noisy restaurant called The Grotto, chef Jason Boyd masterminds a menu that relies on a creative interplay of ingredients—local cheeses, organic vegetables and meats, herbal teas and shade-grown coffees and organic wines.

“How are folks in Bandera taking to your restaurant?” I ask Boyd.

He’s almost too busy to talk. Before The Grotto, Boyd taught himself to cook at Bandera’s former Fool Moon Cafe, where he pored over international recipes and mastered classic techniques. “They know I’m the weird guy who does organic food,” he says, “but my customers are mostly local, so that tells you something.”

“Where should I go for lunch?” I had asked Arkey Blue earlier. He nodded his head across the street.

But I was in the mood for something lighter.

Much like the Silver Dollar, The Grotto has a different vibe in the daytime than it does at night. Sunlight emphasizes the colorful walls and local artwork, and the raspy clacking of the espresso machine and resulting earthy, charry aroma enlivens my step.

I order a baby-greens salad that combines cherries, gorgonzola cheese, and hazelnuts to glorious effect. I probably would have loved the OST enchiladas. But it’s nice to have choices. And I appreciate that in a town like Bandera, which promotes itself as the “cowboy capital of the world,” I can follow up a couple of $2.50 Lone Stars with a cup of organic cappuccino—without missing a beat.