Thriving in windy conditions, these noxious plants spread their seeds and can do serious damage 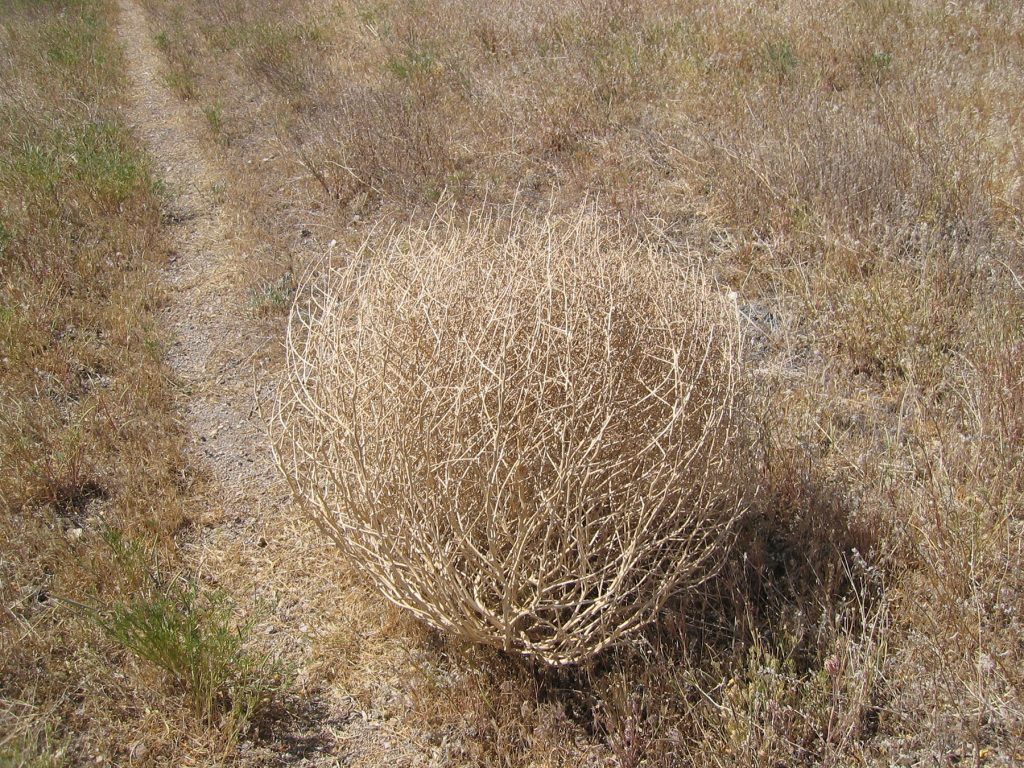 Photo by ImperfectTommy / Edmond Meinfelder, CC BY 2.0, via Wikimedia Commons

They roll through the deserts of Texas: woody, ball-shaped plants called tumbleweeds. They’re a visual cliche and joke in Western movies. They’ve inspired popular songs about the need to keep moving. Sometimes, a single one bounces across a highway. Earlier this year, they invaded at least one small Texas town. But what are tumbleweeds precisely? And how did they become such a pivotal part of Texas lore?

Contrary to what you might think, “tumbleweed” is less a specific kind of plant and more of an adaptation that shows up in unconnected groups of plants, all of which like to disperse by rolling across steppes and deserts with the wind. “They’re often referred to as having a tumbleweed architecture,” says Scott Nolte, weed specialist with the Texas A&M AgriLife Extension.

Tumbleweeds are generally annual plants, Nolte says: They germinate in the early spring, put out seed, and eventually die. Once the winter winds blow, however, they undergo a transformation. As the heavy winter winds whip across the plains, the stem snaps off at the base, and a tumbleweed is born. “It’s almost a woody type stem, it’s very durable,” Nolte says. “They roll everywhere, and they’re dropping seed as they roll.” And while winter in Texas is tumbleweed season, the stems are so tough that they tend to last for months after they’ve dropped all their seeds.

This makes tumbleweeds extremely effective at getting themselves established throughout the open landscapes of West Texas. So effective, in fact, that many people don’t realize they aren’t native. The ones found in Texas are formally known as the Russian thistle, Nolte says, and are thought to have first arrived in South Dakota from Eurasia in the 1870s—nobody quite knows when or how, though it’s likely they got mixed up with shipments of flax seed—before spreading down the interior of the continent, eventually arriving in the Lone Star State.

West Texas, it turns out, is great for Russian thistle in terms of climate and available moisture—they’re some of the earliest plants to emerge on the rangeland. Most only grow about as large as a basketball, but some can get to shocking sizes, Nolte says—up to the size of a refrigerator. They adore roadsides, pastures, fallow fields, fence rows—anywhere land has been disturbed. (In West Texas, that’s basically all of it.) It only takes a 15- to 20-mile per hour wind to get the dead plant rolling, and they’ll roll along until they fetch up against an obstacle—a tree, a boulder, or a fence line. Again, dropping seeds as they go.

“I’ve seen a few very good pictures displaying the spread,” Nolte says. “You can see this line in the spring of seedlings coming up and you can almost track where the tumbleweed rolled across the field.”

But while tumbleweeds are a familiar part of the West Texas landscape, Nolte explains, the state of Texas actually classifies them as a noxious weed. By emerging early and deploying especially long taproots, they can outcompete crops and native plants for soil nutrients and water. It can occasionally lead to nitrate poisoning in cattle. Accumulations of dead tumbleweeds can arrive in large numbers during strong wind, and are extremely flammable.