From John Dillinger to Cormac McCarthy, the Gardner has served those passing through the Sun City for a century 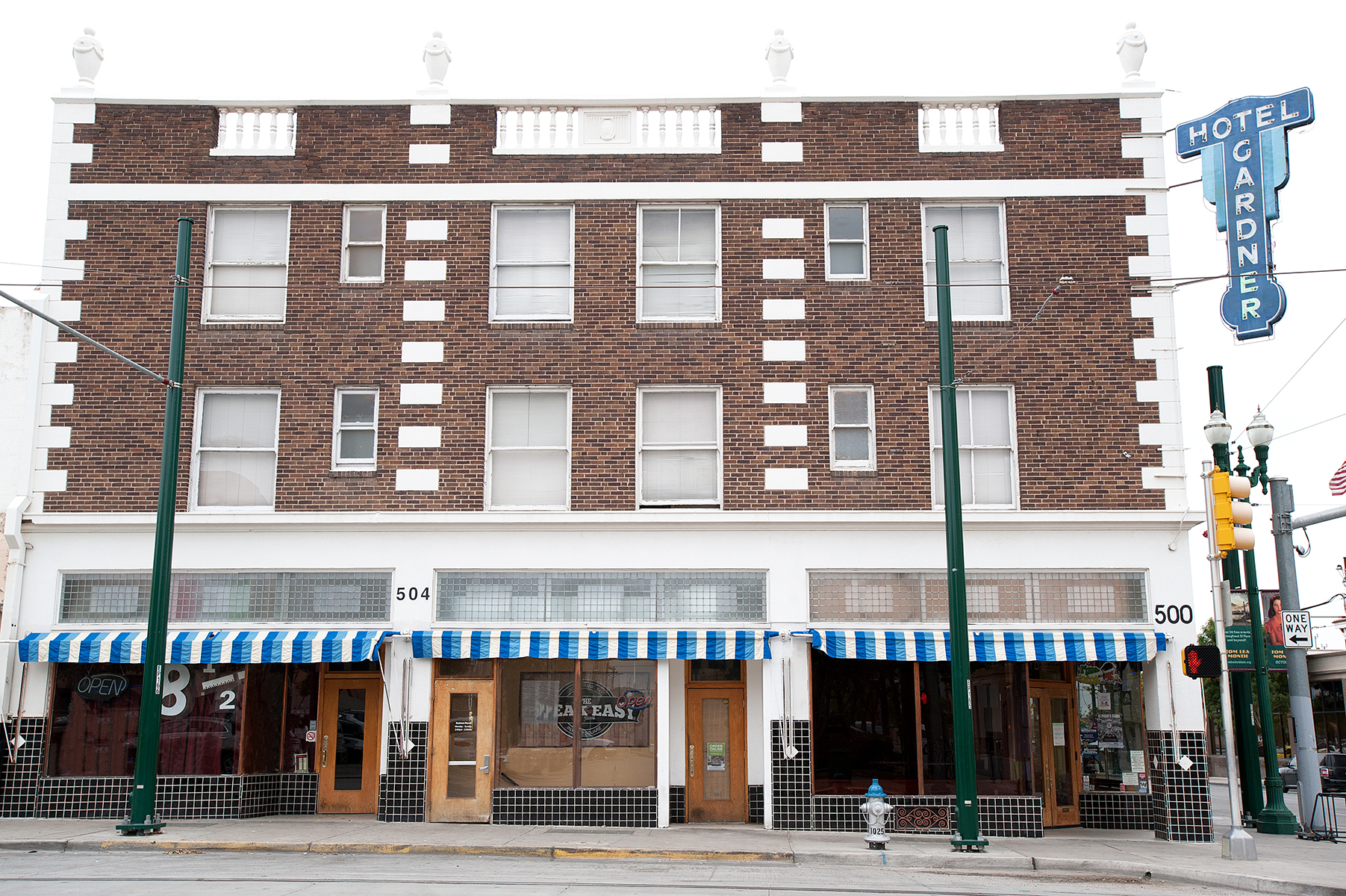 The historic Gardner quaintly sits on a street corner in the heart of downtown El Paso. Photo courtesy Gardner Hotel and Hostel

Travelers entering the Gardner for the first time could understandably mistake it for a museum. Steps from the front entrance, a curio case houses rarities including a replica of infamous bank robber John Dillinger’s plaster death mask and original “wanted” poster, a handwritten letter by Leo Tolstoy, and vintage typewriters. Sepia-toned photographs line the walls alongside antique clocks, a 1930s switchboard, and a wooden phone booth almost as old as the building itself.

While it might not be a museum, the Gardner Hotel and Hostel in downtown El Paso still holds a treasure trove of history as it celebrates its 100th anniversary, making it the oldest continually operating hotel in the city. Last month, the occasion was commemorated with a 1920s-themed block party that featured live entertainment and a ghost tour of the famously rumored haunted building and surrounding area.

“It was really exciting,” owner Joe Nebhan says. “I think the most heartfelt thing about the whole evening was getting to see the family of one of the housekeepers who had started working there since she was a teenager. She worked with us into her late 70s when she retired. I was so happy to see people like her and her family come.”

Nebhan, now in his late 60s, managed the hotel from 1981 until his retirement in 2016. The Gardner has been in his family since his grandfather first purchased it shortly after World War II and is now run by his daughter Stephanie.

“I was virtually raised there,” Nebhan recalls. “The first time I got out there was in June of 1962. I was a little kid. My dad had just taken over the management and ownership of the hotel and I followed him along. I thought it was the greatest thing since sliced bread.”

Opened in May 1922 by lawyer Preston E. Gardner at 311 East Franklin Ave., the three-story hotel elegantly laced by a brick exterior and white moldings boasts a history and guest registry like no other. The aforementioned John Dillinger found refuge in room 221 under the alias “John D. Ball” on Jan. 9, 1934, before being captured in Arizona days later. El Paso law enforcement was aware of the gangster’s arrival but chose not to arrest him since he didn’t break any city laws. Pulitzer Prize-winning novelist Cormac McCarthy found inspiration for several books during residential and short-term stays through the 1970s and ’80s and even mentioned the hotel in his Border Trilogy.

Aside from its two distinguished guests, the bulk of those who have ascended the lobby’s white marble staircase have given the hotel a different claim to fame for welcoming international visitors. Located just over a half-mile from the Paso Del Norte International Bridge—one of the busiest border crossings in the nation—the hotel has long served guests traveling to and from Mexico.

“During the 100th celebration reception, we had some members of City Council there and they were just amazed,” Nebhan says. “Of course, they had never been inside the hotel. They were absolutely shocked with the history. They had thought it was a grungy old building with no vibrancy, and I think we changed their minds.”

Besides the addition of modern essentials, the hotel prides itself in offering rooms retaining their original furniture and features—except without the live canaries that came with each rental when the Gardner first opened. Four of the 50 rooms inside have also served as El Paso’s only hostel since 1984. The hostel’s addition to the hotel was met with immediate success, but Nebhan points out there have been hard times for the hotel—specifically, during the First Gulf War and the aftermath of 9/11 when the entire hostel business took a blow. Even so, the Gardner’s longevity is partly owed to one of the few advantages it has over chain hotels.

“We could make decisions and implement them quickly,” Nebhan says. “I think the ownership of the hotel has made a huge difference. I know there are several other hotels that the owners are absentee owners, they hire other people to run the place and the people don’t really care. But we care, and we still care.”

El Paso has undoubtedly changed since the Gardner first opened a century ago. Notable neighborhoods and buildings have been neglected. Once crowded downtown streets are still searching for a second life. The population has certainly exceeded expectations. Yet in recent years, there’s been a pulse slowly returning to the city’s efforts in preserving its past.

Despite neighboring historic hotels being revived as upscale, lavishly styled boutique lodging, the Gardner has opted to remain true to its antique décor and humble ambiance that is often coveted by franchise hotels, but rarely replicated. As for the Gardner’s 100th, the milestone was no easy feat. But with the future now here to welcome another century, the past that Nebhan’s family has worked to keep alive will remain influential to the hotel’s identity moving forward.

“The celebration was a ton of planning,” Nebhan says. “I couldn’t have done it without my wife or daughter, they did so much. I’m just the old guy, they’re the new people, they’re the future. I’m just part of the past.”