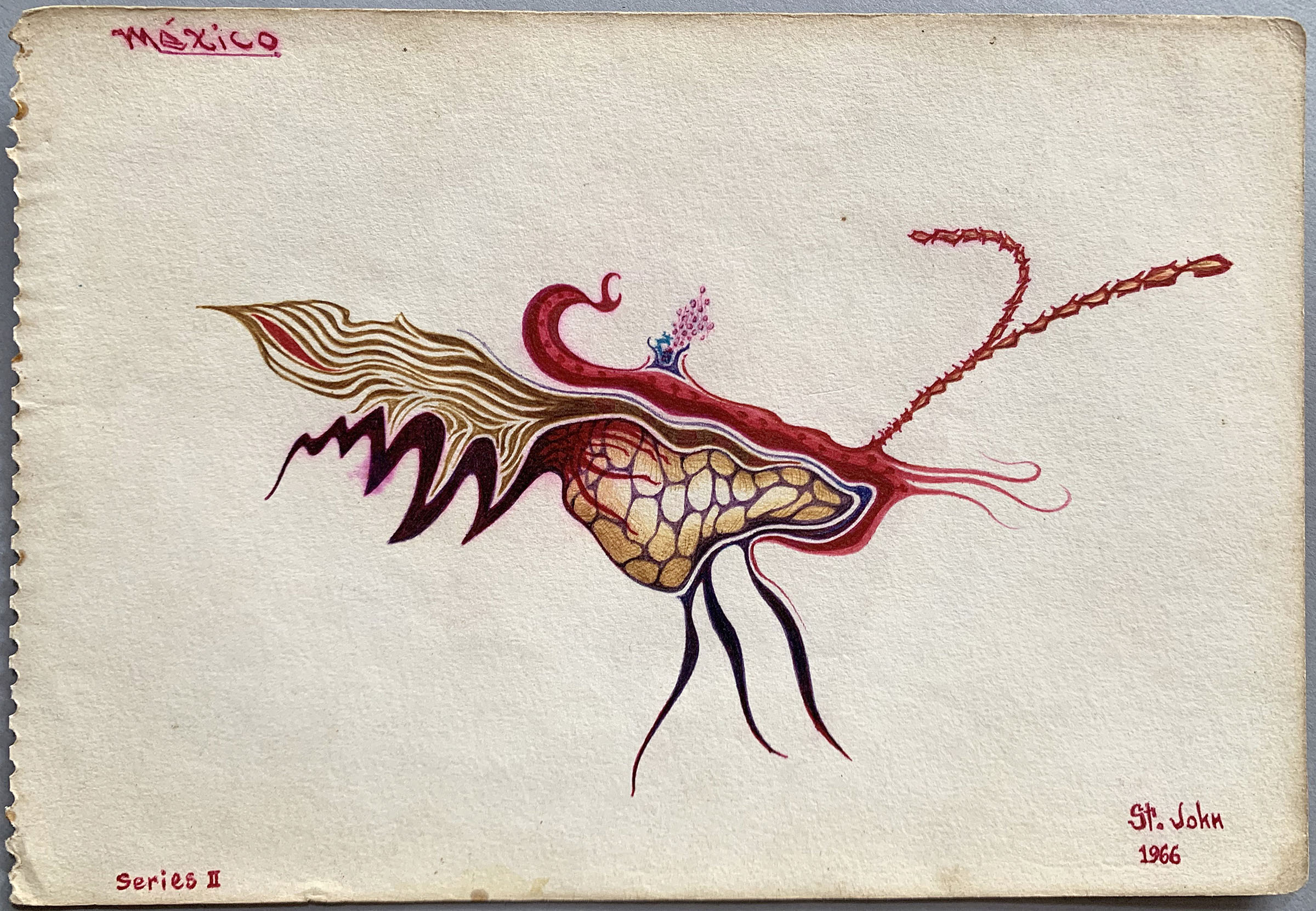 Almost 60 years ago, a trio of university students formed a folk music ensemble in funky little Austin. They called themselves the Waller Creek Boys. The guitarist, Lanny Wiggins, is largely lost to history. The autoharp player, Janis Joplin, made a pretty good name for herself as the dynamic vocalist for the psychedelic band Big Brother and the Holding Company and ultimately as a rock ‘n’ roll legend. The third Waller Creek Boy member, harmonica player Powell St. John, falls somewhere in between.

Like Joplin, the bearded, rail-thin St. John migrated to San Francisco in 1966. He became a founding member of the hippie-country band Mother Earth and wrote songs, including “Bye Bye Baby” for Joplin and “You Don’t Know (How Young You Are)” for the trailblazing 13th Floor Elevators psychedelic rock band. He continues composing and performing to this day.

When St. John has not been creating music, he’s been spending his time drawing and sketching in a distinctive psychedelic style that complements his music. On Feb. 27, Webb Gallery in Waxahachie presents Kingdom of Heaven, the first major exhibition of the drawings of the Texas Music Hall of Famer, whose visionary style is precisely the kind of art the gallery showcases.

“Webb Gallery has spent the last 30-plus years searching out and representing the work of folk artists and visionary artists,” says co-owner Julie Webb. “What gets us going the most is true visionary or outsider artwork.”

Along with St. John’s artwork, the gallery is showing new drawings and paintings by Dallas-Fort Worth native Esther Pearl Watson, whose work in the past has been inspired by UFOs, and new collages from Max Kuhn that draw inspiration from vintage photo booths.

In a press release about St. John’s collection, Webb describes visionary artwork as “the sub-conscious coming to the conscious in art form” and that St. John’s work “is the psychedelic experience in poetry, music, and visual art and the rare view into the expanded mind of a visionary artist.”

According to St. John, the psychedelic experience is only part of the story. “Included in this collection are some works that, frankly speaking, come from somewhere else,” he admits.

With themes ranging from animals to landscapes to amorphous objects, the 33 pieces in St. John’s exhibition cover a period from 1966 to 2011, with earlier works dated and signed “St. John” and newer ones marked “Ray” for his full name, Rayward Powell St. John. There are drawings from his travels in Mexico to his life in San Francisco. Presented altogether, they take viewers on a wild ride through a lifetime of a legendary musician’s visions.

Kingdom of Heaven is open by appointment and online from Feb. 27 through May 9. A Zoom chat with the artist is scheduled for Feb. 28 at 4 p.m.