Take A Nostalgia Trip at the Gillespie County Airport in Fredericksburg

With a retro hotel, diner, and officer's club, this airport offers more than just a mode of transportation 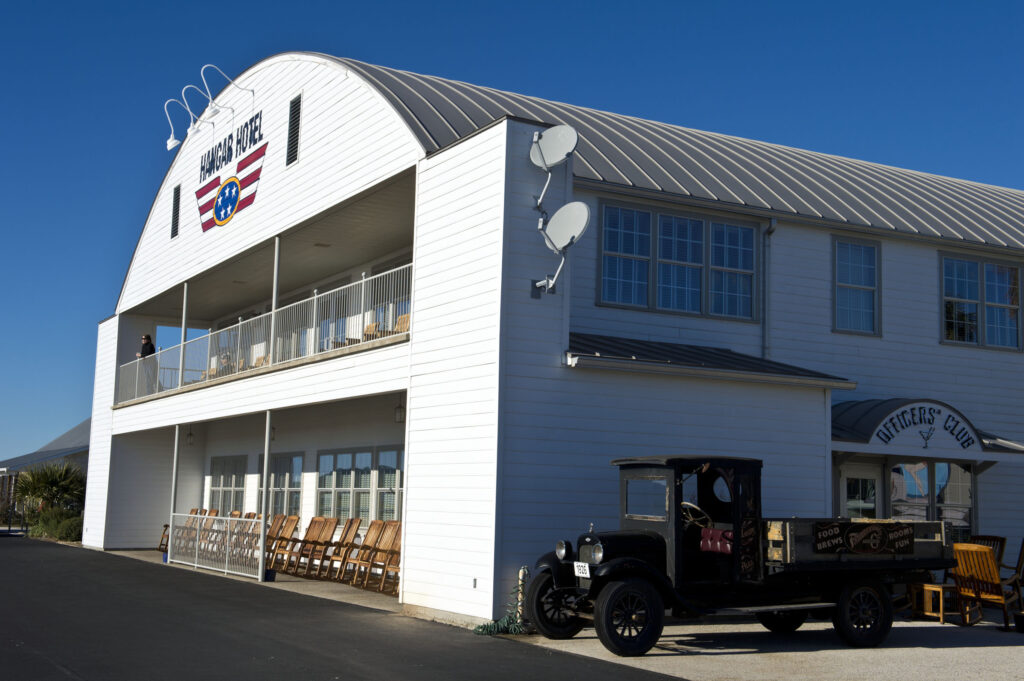 The Hangar Hotel, adjacent to the Gillespie County Airport, offers accommodations inside a structure that resembles a 1940s airplane hangar. Photo by Kevin B. Stillman.

While the National Museum of the Pacific War is the premier destination for World War II history in Fredericksburg, just 3 miles away from this revered landmark, via State Highway 16, another wartime experience takes flight at the Gillespie County Airport.

For manager, Tony Lombardi, the airport is the city’s gateway. “We’re not a cold, fenced-in airport,” he says. “The ambiance alone is neat for people to come see.”

Take for example the Hangar Hotel, which feels like time-traveling back to a bygone era, with its design resembling a WWII military hangar. Inside, there is aviation memorabilia and interiors inspired by the 1940s, along with a second-floor observation deck where guests can watch planes come and go.

Also on-site is the Airport Diner, which features a menu of retro dishes with warplane-themed names like the Bomber Burger, the P-40 Warhawk (Opa’s sausage with grilled onions), and the B-17 Flying Fortress (pulled pork on a hoagie roll). There’s also the Officer’s Club, a full-service bar; a conference center; and an event space called the Pacific Showroom, which boasts a dance floor, stage, and seating for 250 guests.

Though the airport first opened in 1948, it wasn’t until the turn of the century that it expanded considerably. The venue has grown from a complex of five to 34 buildings, including the hotel, convention center, and diner, along with private and commercial hangars. It also houses agencies like the Texas Forest Service, a department of Texas A&M University, which uses the airport as a hub for aviation firefighting in Central Texas. It is also home to one of the best fixed base operations in the state, according to Gwen Fullbrook, owner of Crosswind, a flight school based at the airport.

As a fixed base operation, the airport facilitates arrivals and departures of airplanes, sells aviation fuel, and provides other services for pilots visiting from around the country. “Ours also has car rentals and overnight storage for airplanes,” Fullbrook says. “I know pilots from all over love to fly in for lunch at the Diner.”

Along with Crosswind, TacAero is a flight school that offers specialized tailwheel and vintage aircraft instruction and maintenance. It also offers scenic flights in the 1943 Stearman, an open cockpit Navy biplane WWII trainer. “It’s very unusual for an airport in a town this size to have such a diverse group of first-class aviation services,” Fullbrook says.

Unbeknownst to many, Gillespie County is often credited as the birthplace of aviation. In 1865, roughly 40 years before the Wright Brothers manned their first engine-powered flight in Kitty Hawk, North Carolina, Jacob Brodbeck, a school teacher and inventor who immigrated to Fredericksburg from Germany, flew his pioneering spring-coiled airship over the Texas skies. Today, there is a bronze bust of Brodbeck at the Marktplatz in downtown Fredericksburg, and he is buried in nearby Luckenbach.

While this facet of history is still widely unknown outside of Fredericksburg, locals like Fullbrook are contributing to the fast-growing interest in aviation in town.

Growing up in East Texas, Fullbrook remembers traveling to the Ellington Field Joint Reserve Base in Houston as a child and watching jets take off. “I just loved to go watch. I’ve always been drawn to it,” she says.

Fast-forward to 2017 when she finally pursued her lifelong dream and earned her pilot’s license. “I just had one of those moments where I decided I better get on it before I’m too old.”

Today, Fullbrook passionately shares the thrill of flight with the next generation through her flight school. In 2019, she started the Fredericksburg Flight Club and launched an Aviation Career Day that same year, inviting presenters from the Army, the Navy, the Aircraft Owners and Pilots Association, and the Embry-Riddle Aeronautical University to come and speak. The event attracted more than 300 kids from around the Hill Country.

“This airport is so unique—kids can come out here and get up close and personal with these airplanes. I really want kids to be exposed to it because you never know…” she says, wistfully. “There is nothing like sitting at the end of that runway thinking, I am going to fly.”

Luckily for aspiring Hill Country aviators, history buffs, and visitors to the county, liftoff is within reach.