Texas Fishing 101: A Beginners Guide to the Freshwater Fisheries of Texas

With thousands of spots around the state, finding one near you starts with getting to know fish and their habitats 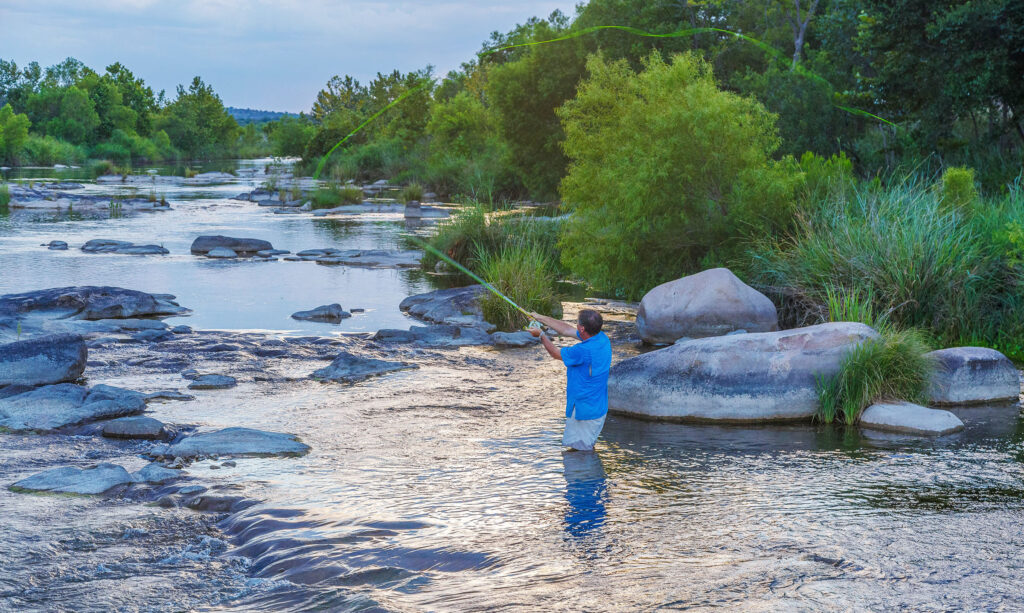 Fishing at the Llano River near Castell. Photo by Will van Overbeek.

The numbers don’t lie. With nearly 7,000 named lakes in Texas and nearly 190,000 miles of river, not to mention stock tanks and ponds on private property, freshwater fishing in the state offers tons of fun and a lifetime of challenges.

Crappie, bass, and catfish are just three highly sought freshwater fish targeted by beginners and experts alike. Kids often like smaller species, such as bluegill, a sunfish that rarely weighs more than a pound, while adventurous souls pursue monsters like the alligator gar, a scaly fish with a toothy jaw that can grow to 300 pounds. In turn, the hardest decision new anglers face is just where to start.

That’s what Patrick Ireland says. A Texas Parks and Wildlife Department fisheries biologist, Ireland oversees the state’s central district, pursuing habitat conservation, fish stocking, and surveying across the lakes and streams that weave their way through Austin and San Marcos. Since the spring of 2020, he notes, the COVID-19 pandemic has led to a surge in the sale of Texas fishing licenses, which are required of all anglers 17 years and older.

Newcomers to the outdoors do have their choice of spots, but urban families actually don’t have to travel far to reach the parks comprising the Neighborhood Fishin’ program—where the department stocks catfish in summer and rainbow trout in winter, providing everyone a chance to bring home dinner.

“It’s a sure-bet for catch-and-keep fishing,” Ireland says. Neighborhood Fishin’ operates in cities across Texas, including Amarillo, Austin, and College Station, and provides details on stocking along with tips and techniques for catching your next fish.

Once newcomers get a feel for what they’re doing, Ireland recommends they start mapping out other opportunities. The state has dozens of inland, freshwater paddle trails, where kayakers can pursue a variety of fish across many miles. Austin’s Lady Bird Lake is popular for largemouth bass and carp. The smallmouth buffalo fishery on Walter E. Long Reservoir has lately attracted attention with trophy catches weighing over 60 pounds. Stretches of the Colorado River below Austin boast the state fish of Texas, Guadalupe bass.

“We tell people that to learn to fish is to learn the fish,” jokes Houston-based Michael Scherer, who specializes in angler education. Scherer is both a volunteer instructor with Texas Parks and Wildlife and a program director with Fishing’s Future, a national nonprofit organization that runs family fish camps and outdoor education programming in school districts across Texas.

He advises new anglers spend less money on gear and more time doing research into what sorts of fish can be found in their local habitat, whether it’s rivers and streams, state parks, or other destinations. Then learn what those fish eat, and the rules for local waterways.

“If you know which fish are living where, you can catch that fish,” says Scherer, who stalks the lakes and streams of East Texas with a simple rod, rigged with line, bobber, and baited hook. For instance, bluegill tend to congregate around “structure” such as sunken wood and near aquatic grasses, as do largemouth bass, widely regarded as the king of freshwater sportfish in Texas. Crappie occupy deeper holes.

The season makes a difference as well, he says. Spring finds white bass leaving large lakes to swim upriver, where they spawn over sandy bottoms.

Scherer also suggests networking with neighbors and state parks staff for information, and hiring a guide for challenging fish, such as land-locked striped bass or gargantuan alligator gar. The websites of Fishing’s Future also lists family camps and other events that offer opportunities for fishing with others.

In the end, from the resacas of the Rio Grande Valley to the headwaters of the Red River in the Panhandle, across the Piney Woods and the rolling Hill Country, Texas has no shortage of places to fish—nor shortage of species to pursue. Just beware, as any seasoned fisher can tell you, once your loved ones get hooked on fishing, fish tales will follow.