Texas Producer Lloyd Maines Steps Out on His Own

Known for his work with the Chicks, Joe Ely, and others, the 71-year-old releases his first solo album, 'Eagle Number 65' 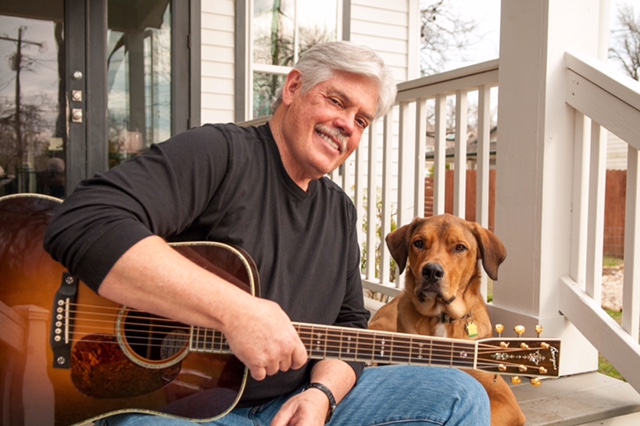 The call came at the exact minute he said it would. “When you’ve been working in the studio for 50 years, you learn that,” the booming voice on the other end of the line said. Lloyd Maines was talking about the value in watching the clock as a music producer.

He should know. He has likely produced more Texas music than any single person ever, involved in an estimated 5,000 projects over the past 50 years. He is also one of the finest pedal steel guitar players alive, an in-demand music director, and the answer to the trivia question: “Who has made the most appearances on the Austin City Limits television series?”

“I lost count when the [Austin City Limits] Hall of Fame thing started,” he admitted on the phone. “They hired me to be the music director for those annual shows, which started in 2014. Before that, I think my count was 25 times on the show. Plus, I did a Robert Earl [Keen] taping back in April, and Terry Allen earlier this year.”

To casual music fans, Maines is best known for his work producing a young female band called the Chicks (formally known as the Dixie Chicks). In the early years, he played pedal steel on two of the group’s first albums. When singer Laura Lynch left, Maines introduced the Erwin sisters, Emily and Martie, to his daughter Natalie, who proceeded to elevate the group to superstar status.

But Maines’ sideman credits are deep, going back almost 50 years. He’s played with the Chicks, Jerry Jeff Walker, Terry Allen, and the original Joe Ely Band, formed in Maines’ hometown of Lubbock in 1973.

Despite those impressive achievements, there was a whole other reason Maines was calling me: the release of his very first album at age 71, Eagle Number 65.

Two of his best musical friends had been encouraging him to make his own record for quite some time. “Terri Hendrix [with whom he has collaborated for 25 years] always was saying, ‘You got to put out an album. You have to have a record of your own,’” Maines said. “Terry Allen has been beating me over the head for years to do one.”

COVID-19 provided the prompt. “Starting in March 2020 because of the pandemic, I stopped doing face-to-face studio sessions,” Maines said. “I didn’t want to be inside a room with a bunch of musicians. I started doing all my recording at home—and I’ve got a lame setup. People started sending me stuff from all over the world. I did 10 songs for a guy in Australia. It was madness, but I enjoyed working at home. While I was doing that, I thought I could put together some songs for my four grandkids. The deeper I got into it, the more thematic it became.”

The album turned into a true family affair with his three grandsons and granddaughter contributing their talents. Beckett Pasdar, Natalie’s younger son from her marriage to actor Adrian Pasdar, plays drums on the original “Hank Hill’s Nightmare.” Older brother Slade Pasdar wrote and played on the guitar and steel composition “Homer’s Odd Is He.” Declan Maguire, son of photographer Kim Maguire, Natalie’s older sister, plays piano on the track named for him, “Declan’s Cookie.”

The Chicks’ song ‘Lullaby’ appears on the album. “I was there for that [original] recording and when they played the demo, I got choked up,” Maines said. “The lyrics are so strong and important. I didn’t know how it would translate, so I had [granddaughter] Amelia Maguire sing lead.”

Maines got the idea to work with his immediate family from Allen. After co-producing Allen’s epic double album Lubbock (on Everything) in 1979, Maines produced his song “Bloodlines” in 1983. For it, Allen gathered as many family and friends into the studio to sing along with him. For his own album, Maines got his own brothers and sisters, and their kids and grandkids to sing along—via telephone, email, and digital prints. “Fifty-two voices,” Maines beamed.

As for his own vocal contribution? “I never intended to sing on my record,” he said. “I had to make myself do it because of the subject matter. It’s so family-oriented. It was hard to get through it. I had to stop and start numerous times.”

Playing with family has always been a part of Maines’ life. He dove into music at age 14 when he and his brothers started the popular Lubbock country dance band the Maines Brothers. His picked up the steel guitar as a teenager, becoming “enamored” watching Frank Carter, who played the instrument in Lloyd’s father’s and uncle’s version of the Maines Brothers. One day, Maines said, he found a steel guitar made by Carter for him sitting in the living room.

The brothers would play at the historic Cotton Club in Lubbock every Sunday for two years while he was in high school. Whenever Willie Nelson was booked at the club, Maines would be sure to watch his steel player, the late Jimmy Day. “Man, I would watch every move he made, every nuance,” he said. “I don’t think he ever once looked in my direction, but I didn’t care. I was soaking it in, his chords, his voicing. I’d try to remember all that and implement the next time I played.”

Also, while in Lubbock, he learned about recording music, doing a lot of on-the-job training running sessions at Don Caldwell Recording Studio. “I did tons of steel,” he said. “In Lubbock, all the area farmers get into their 50s, start thinking about how much they’ve sinned, so they all want to do a gospel album. It’s the way I paid my bills. When I wasn’t touring with Ely, I was in the studio.”

After the brothers grew up and went their separate ways, Maines joined forces with Joe Ely to start a band in 1973. It was during this period that Maines entered my ears. In 1977, when the Joe Ely Band released their first album on MCA Records, the supercharged group showcased Maines’ pedal steel guitar, which didn’t sound like a pedal steel at all, but rather like ZZ Top.

Along the way, Maines fine-tuned his steel guitar into a rocked-up instrument that could go toe-to-toe with lead guitarist Jesse Taylor. Their unique mix of rock ‘n’ roll infused with country elements led to a national and international following for the Joe Ely Band.

Success prompted Ely and band to depart Lubbock one by one for the greener pastures of Austin during the 1980s. Maines stayed behind. He left the band for family and work at Don Caldwell’s studio. “Ely had nine weeks of touring coming up, and I had two kids and didn’t want to burden Tina [his wife of 52 years].” Maines said. Ely wouldn’t fire him, and has kept a space open for Maines whenever he wants, which includes the last Joe Ely Band gig at Gruene Hall in February 2020.

Maines finally moved to Austin in 1998. “I started doing so much work in Austin, producing so many acts, on my 1997 tax returns, I realized I had been in Austin 207 days,“ he said.

If there is a quality that sets Maines apart from other great steel guitar players it may be his versatility. He can play straight country as good as any session player—years ago, producer Chip Young guaranteed Maines plenty of work if he moved to Nashville. (Maines stayed put in Texas.) He also takes his instrument to places it’s never been before, working it like a lead guitar. “That was all Joe,” Lloyd said, blaming his first bandleader. “Even though he wore a cowboy hat and could play country, he would also rock stuff out.”

Lloyd brought his own special sauce: a 9-volt battery distortion unit called a Boss Tone he got from Sneaky Pete Kleinow, the old-school pedal steel guitarist with country-rock pioneers the Flying Burrito Brothers. He could make it sound like Jimi Hendrix or the Allman Brothers. “People were shocked that a pedal steel guitar could sound like that,” he said.

It’s a style that harkens back a whole century to Bob Dunn, who played the lap steel hot, like a sax, with the trailblazing Western swing ensemble Milton Brown and His Musical Brownies in Fort Worth.

Back in the here and now, Maines was pressed for time. He had to drive to San Antonio to play the last dates of Robert Earl Keen’s farewell tour, the final three happening in early September at Floore’s Country Store in Helotes. “I produced five albums for Robert Earl,” Maines said. “One was No. 2 Live Dinner, which was recorded at Floore’s.” There were gigs coming up with the Flatlanders, the Chicks, Ely, and Terri Hendrix. So, with no time to spare, I asked for his trade secrets.

What’s the key to being a producer? “Three answers: in tune, on time, and under budget. I also try not to go in with a preconceived notion how it should be, until I hear the songs. All I want is it should be pleasing to the ear, and convey the lyrics. I have to honor the lyrics. That’s what it’s all about.”

What’s the key to being a sideman? “I just try to play the songs. Generally, I have good luck with that. That other key is when you do fills in the verse and the choruses, never step on the vocals. Don’t crowd the vocals and you’ll always make the singer happy.”

Finally, I asked what it’s like to be a front man for the first time at age 71. “When I produce an album for someone, I treat it as if it’s mine, all the way through the mastering process and everyone signing off on it. Then I move on to the next project,” he said. “Producing my own album was a little easier, because I only had myself to answer to. I almost fired myself a couple of times, but I realized nobody else would work as cheap as me. Then after I signed off on it, I could just move on. I had to say, ‘Now what?’”

Eagle Number 65 is available for purchase here. Lloyd Maines’ upcoming shows include the Flatlanders in Luckenbach on Sept. 24, the Chicks at Austin City Limits Music Festival on Oct. 7 and 14, and leading the house band as musical director when Joe Ely and Sheryl Crow are inducted into the Austin City Limits Hall of Fame Oct. 27. More dates can be found at lloydmaines.com.