The ABC’s of Coastal Fishing 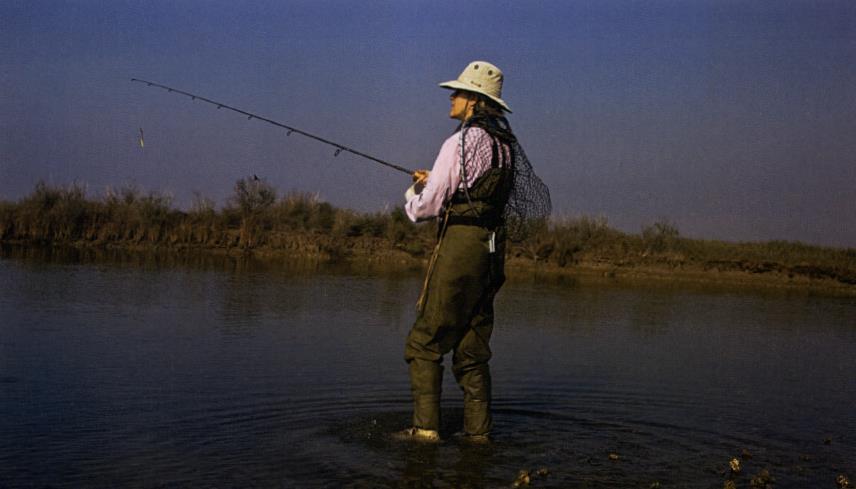 Take the bait and learn to fish.

I am hooked on fishing. I like the challenge of figuring out where to cast a line, the methodical nature of preparing my equipment and baiting a hook, the meditative quality of waiting and watching for that telltale jerk on the rod that tells me, “Game’s on!” For me, there are few better ways to enjoy a beautiful day outdoors than fishing. And while I relish the sport’s solitary pleasures, I also find that fishing is a superb activity to share.

And so it was that on a recent Sunday afternoon, my wife, Janet, and I drove along the beach at Matagorda, returning home from a pleasant day of kayak-fishing in East Matagorda Bay. Both ofus had caught a few redfish—all of them a hair undersized— so we had released them to grow up. No matter. Alight breeze blew through the windows of my truck, and soothing waves lapped at the shoreline. A perfect day.

Then I noticed a scenario that made my smile even wider. At the surf line, a man proudly held a speckled trout more than two feet long, and his family was gathered around; his little girl was even hopping up and down. Now, this was a trout any seasoned fisherman would have been proud of, and my curiosity got the best of me. This was one fishing tale I wanted to hear.

Turns out that Mac Mayo, his wife, Theresa, and their daughter Marifrances had driven down from Kingwood to enjoy the beach and perhaps catch dinner. Mac, a longtime angler, knew what he was doing with light tackle: He had put a shrimp on a hook rigged above a weight, and then cast the bait into a trough that formed between sand bars. Next, he anchored the rod and reel into a short piece of PVC pipe pounded into the sand. Twelve-year-old Marifrances was closestto the rod when it bowed and the reel screamed. She pulled the rod out of the PVC pipe and managed to hold on while the fish made a run for it. Her dad urged her to be patient, and eventually the trout grew tired and she was able to reel it in. The Mayos didn’t have a camera, so I snapped some photos and promised to send them. I knew Marifrances would want to show off her big catch.

That incident reminded me of the first large redfish I had ever caught with light tackle. I was fishing at Christmas Bay, south of Galveston, in 2000 when l saw a splash on the shore line and cast my lure toward the commotion. The fish pounced and took off, its power reverberating through the line and into my arm.After I wrestled that fish ashore (a two-foot redfish is a strong fish), I started fishing two or three times a week, studying technique, and reading about fish biology and behavior. I’ve concluded that fishing can be simplified if you know what bait to use and how to rig it, if you fish in fairly clear water
(even better if it’s moving), and if you cast your bait around structures of some sort.

When I go to an unfamiliar coastal area, I stop by a tackle store and purchase a fishing map. These maps show the topography of the bays and indicate where you’re likely to find different species of fish. (The three most sought-after fish in the bays and surf are speckled trout, flounder, and redfish, which
are also called red drum.) I select a spot to fish based on the same conditions fish look for when they pick a place to feed: the presence of prey and the water clarity to see it Structures like oyster reefs, submerged objects, and areas of submerged or exposed grass are places where crabs, shrimp, and
bait fish congregate to feed and hide from predators. The big fish go there to eat the little fish; I’ll go there to catch the big fish.

The best days and times to go fishing are when the tide is moving in or out, as predator fish are more likely to feed in moving water. Here’s why: The current moves small fish, crabs, and shrimp away from their protection in grass and oyster reefs, and predator fish position themselves here to catch them.

If you’re purchasing new tackle and don’t understand how to rig the line or attach a lure to a hook, ask the salesperson to demonstrate. If a soft plastic lure is not put on the hook properly, the fish won’t eat it because it does not “swim” like a minnow. Other lures shimmer like desirable prey fish, make noises that attract predators, or resemble wounded mullet.

I consider wind and tide when selecting a place to fish, too. Wind makes water move in a circle, stirring up the bottom and mixing mud or sand into the water. This reduces visibility, which means that fish will have trouble spotting my bait. So I pick a fishing spot that is protected from wind by land.

The ideal water visibility for using artificial lures is from 12 to 18 inches, and the best water color is green. In these conditions, a fish can see your bait (natural or artificial), but not so well that it can tell that an artificial lure is not the real thing. When the water is very clear, try live shrimp or minnows, as
some fish will pass on an artificial lure. Dead shrimp work in murky water because predator fish are attracted by smell.

Learning to think like a fish can yield a large return in fishing fun.