The Bird Lady of Rockport 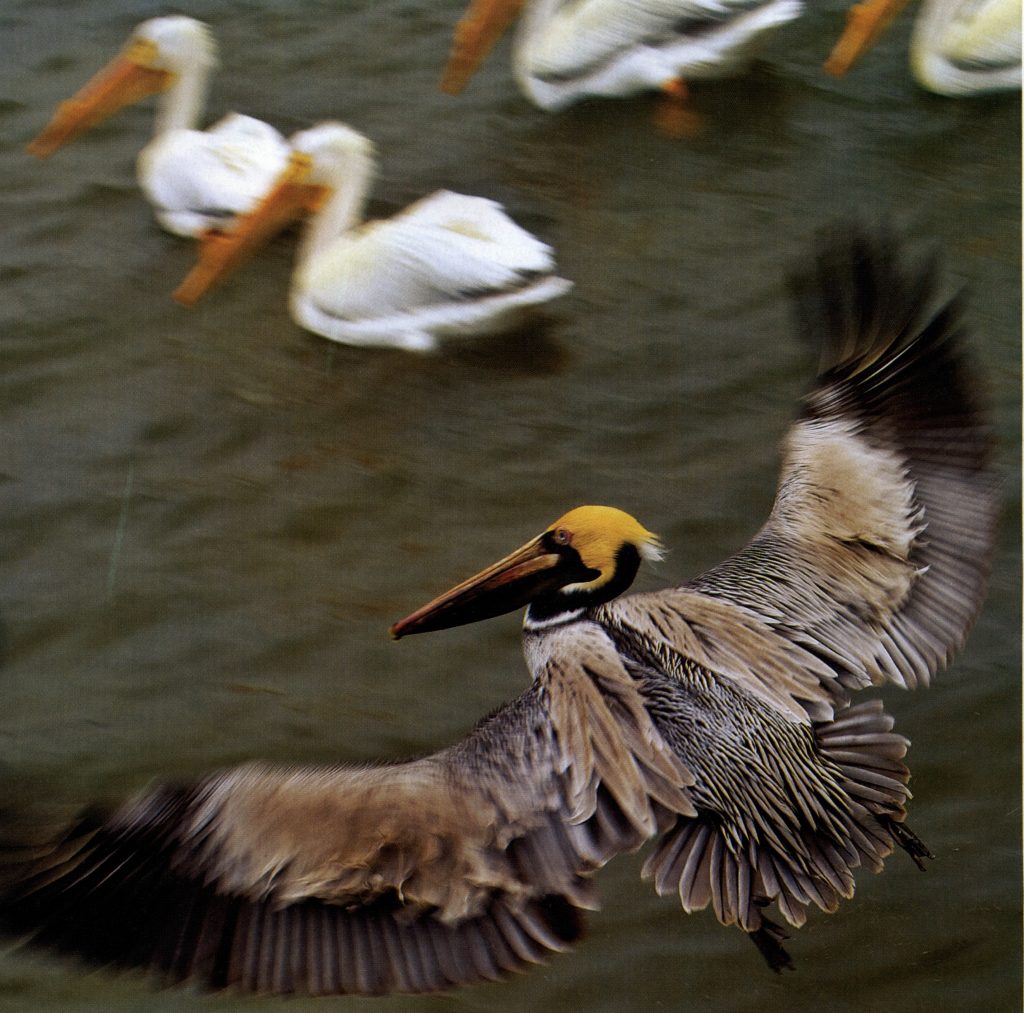 Pelicans make a splash along the Gulf Coast; the yellow plumage indicates it’s time to mate. Photo by Kevin Vandiver.

“I want to make a confession,” announced the esteemed naturalist Roy Bedichek to the diminutive queen of Texas birdwatchers, Connie Hagar, one crisp October day in 1945.  According to author Karen McCracken in her book Connie Hagar: The Life History of a Texas Birdwatcher, Bedichek went on to explain that he had heard of her many “wonderful discoveries” from colleagues in Austin and the Rio Grande Valley, and had come to Rockport to prove her “a faker.” But after an intense day of fieldwork that included his first sightings of Mexican grebes and piping plovers, Hagar had earned Bedichek’s respect.

“That happened over and over as professional ornithologists from far and near to investigate the incredible sightings she reported,” says Janie Ellis, a birding enthusiast and certified interpretive guide in Rockport. “She established Rockport as the birding capital of Texas.”

Born in Corsicana in 1886, Martha Conger “Connie” Neblett grew up in a family that nurtured an appreciation of the natural world and the fine arts. She married at age 20, living for a time in Ennis and New Orleans, where she fine-tuned her fascination with the avian world. She had already divorced and remarried by 1933, when she visited Rockport with her sister Bert; together, the two took delight in identifying herons, terns, and other feathered friends. A few years later, drawn by the profusion and diversity of bird life along the Coastal Bend, Connie and her second husband, Jack, moved to Rockport.

The Hagars purchased the Rockport Cottages tourist court, and Connie began writing articles and reports that soon drew the birding world to the resort town on Aransas Bay. As birdwatching guru Roger Tory Peterson notes in the foreword to McCracken’s biography, “The list of ornithological stars who signed in at the Rockport Cottages is impressive.” Ludlow Griscom, for instance, described by Peterson as “the dean of American birdwatchers,” trekked to Rockport from Boston.

“Surely, Mrs. Hagar,” queried the Bostonian, “you don’t mean that Wied’s crested flycatchers are present this far north in Texas. Are you sure?”

Mrs. Hagar reportedly replied, “Mr. Griscom, if you will move your chair back a bit and look out the window, you will see a pair building their nest.”

McCracken credits Connie Hagar with identifying more than 500 species around Aransas Bay. Hagar added 20 new species to Texas’ avifauna list and reported several species of migratory birds thought to be extinct. In the 1940s, she became the first to document the migratory patterns of hummingbirds along the Texas coast, noting that the tiny birds spent a month or more in the Rockport area, feeding “on nectar and insects caught in the flowers of the trumpet vines, honeysuckles, coral bean, hibiscus, and Turk’s cap.”

Hagar was usually impeccably attired, even in the field. When photojournalist Alfred Eisenstaedt came to Rockport to photograph Hagar for a piece on ornithologists that appeared in Life magazine in 1956, he worried that her silk dress and matching jewelry wouldn’t look realistic to readers.

In fall of 1962, the National Audubon Society held its annual convention in Corpus Christi to ensure that Hagar, who was recently widowed and beginning to show signs of frailty, could attend and receive a special award of appreciation.

“Ornithologist and conservationist,” read Audubon President Carl W. Buchheister from the engraved plaque. “…You opened our eyes to that great miracle of the natural world, the migration of birds. You enriched our knowledge by patient, open-minded, and courageous observation and reporting of the facts … You stood so straight among the wind-bent trees of your coast that you saw what others before failed to see.”

Connie died in Corpus Christi in 1973. She was buried in the Rockport Cemetery, her grave overlooking one of her favorite birding sites. The former location of the Rockport Cottages is now home to the Connie Hagar Cottage Sanctuary, a 6%-acre preserve where oak-motte and coastal-grass habitats attract year-round and migrating birds.