Closed to the public since last summer, the ship won't reopen in a new home for at least a year. "We’re going to do it as fast as we can but as slow as we need to, to make the best call. You just don’t load up a battleship and move her to a new home every day.” 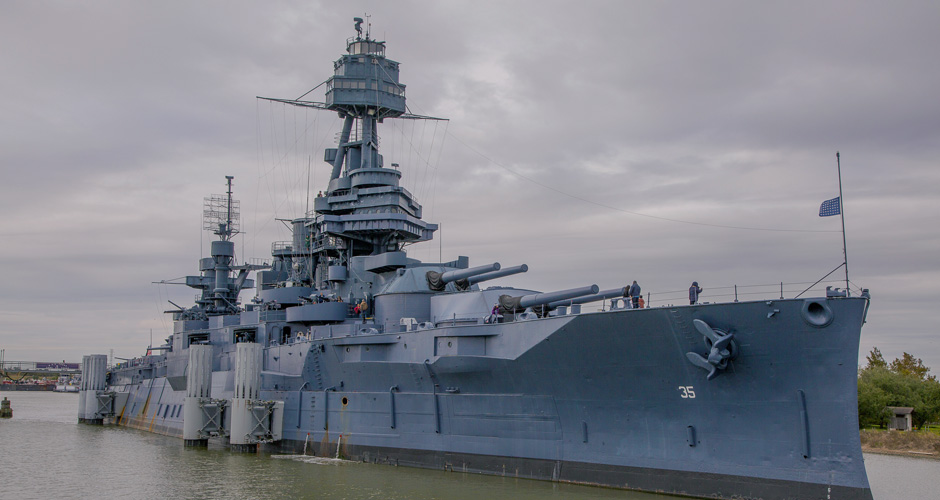 The Battleship Texas, the only ship still in existence that served in both world wars, is one step closer to leaving its berth on the Houston Ship Channel, where it has been since 1948.

The Texas Historical Commission recently approved three permits to move the floating museum from La Porte to a shipyard, replace its rusted hull with a new one, and remove and refurbish most of its guns. When repairs are complete, the vessel, the first U.S. ship to mount anti-aircraft guns, won’t return to her current berth adjacent to the San Jacinto Monument. The floating museum will go to a new—as yet undetermined —permanent home where officials hope she’ll draw more visitors.

After World War II, the Battleship Texas was scheduled to be hauled out to sea and scuttled, but instead was transformed into a museum that opened to the public in 1948. Over the decades, the ship rusted, resulting in leaks that forced the site’s closure to visitation last August.

The 86th Texas Legislature last year approved $35 million in funding to move and restore the ship. Since then, thousands of ship artifacts have been moved into storage in preparation for the work.

Bruce Bramlett, executive director of the Battleship Texas Foundation, a nonprofit that supports the ship’s programs and preservation, says the move will likely take place in late July or August. Unlike in 1988, when the battleship took on water en route to Galveston for repairs, crews will float the ship less than a mile down the channel to a submerged dry dock, which will be raised to slowly lift the ship completely out of the water. Crews will secure the ship so it doesn’t roll over, then transport it to a shipyard for repairs.

“In my opinion it will be safer when we get it on a floating dry dock than where it’s been sitting in water,” Bramlett says. “She’s going to be fine.”

Once the battleship makes it to the shipyard, which has not yet been identified, crews will peel off the existing steel hull and replace it with a new steel one designed to look like the original. “She’s going to have a new hull from water on down,” Bramlett says. “That’ll ensure she’ll be around for a long time.”

Most of the ship’s guns will be removed and taken to a warehouse donated by Houston-based NRG for sandblasting, fabrication work, and painting.

“We think she’ll be gone about a year,” Bramlett says.

When repairs are finished, The Texas won’t return to her current home adjacent to the state historic site commemorating the Battle of San Jacinto. Foundation officials are sorting through submissions from cities along Texas’ upper coast interested in serving as her new permanent home. Galveston is known to be interested in hosting the ship.

“We’re going to do it as fast as we can but as slow as we need to, to make the best call,” Bramlett says. “You just don’t load up battleship and move her to a new home every day.”