The Original Threadgill’s Closes, Marking the End of a Defining Cultural Era in Austin

Owner Eddie Wilson reflects on the restaurant, bar, and live-music joint where Janis Joplin got her start 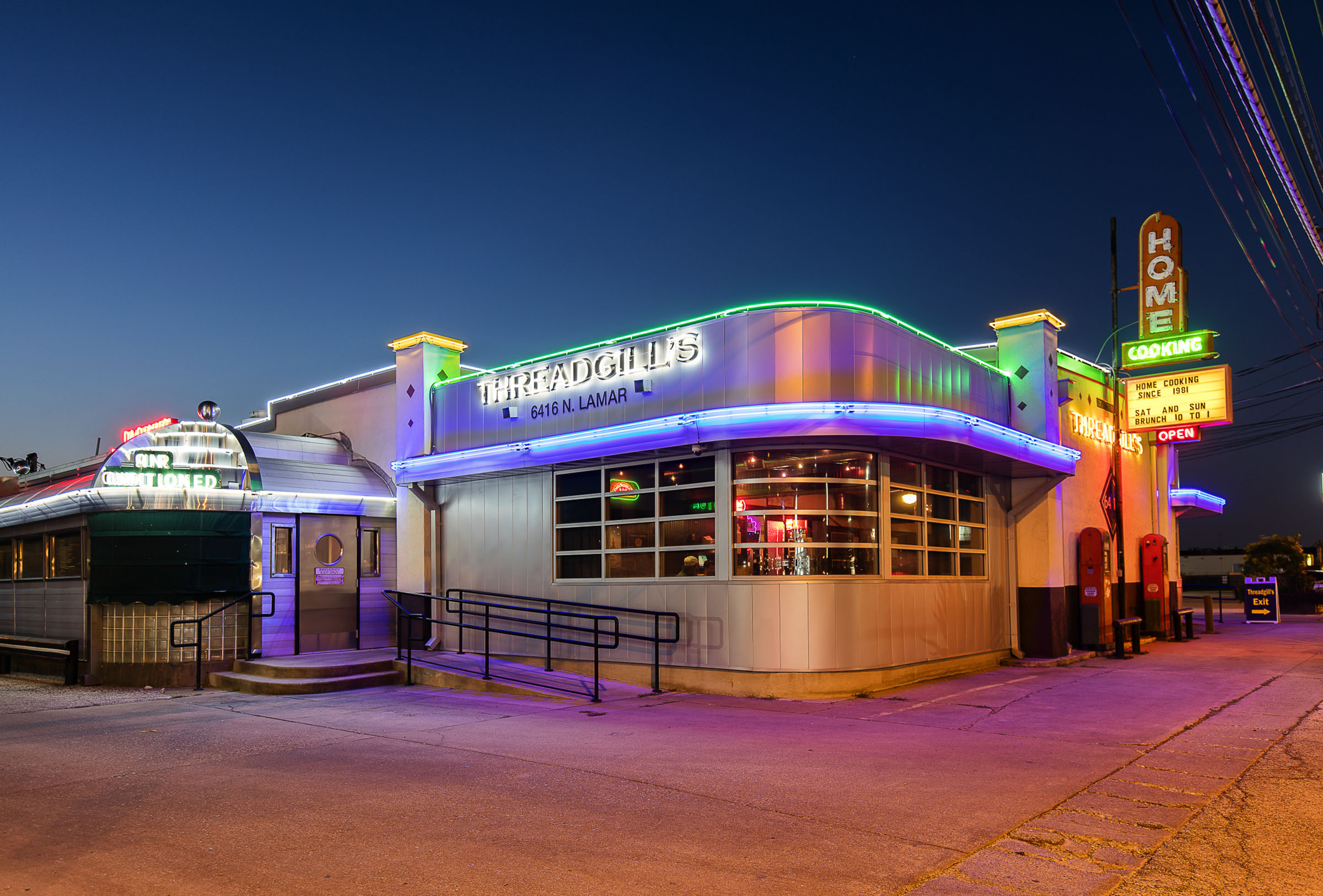 Just before Eddie Wilson bought the vacant Threadgill’s Tavern in 1979, a fire set by a transient all but burned it to the ground. This erased a fair piece of what was left of the original place on North Lamar Boulevard in Austin, a bar and live-music joint where Janis Joplin got her start. But Wilson got to work and reopened Threadgill’s as a restaurant on New Year’s Day 1981.

Eighteen months later, the place burned down again, this time with a lot of Wilson’s antiques and treasures inside. Yet Wilson got to work again, rebuilding, refurbishing, and reopening Threadgill’s within six months. 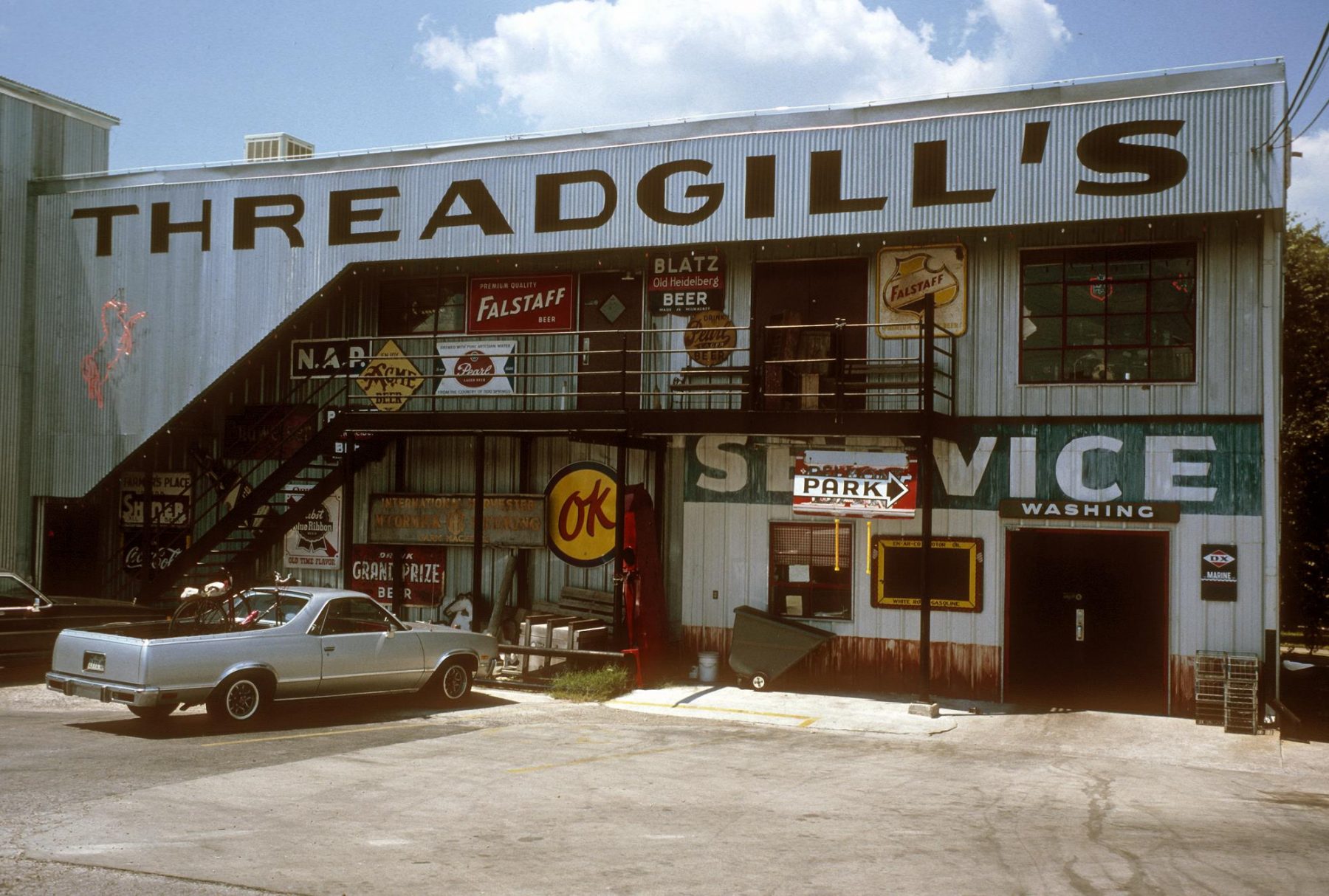 Almost four decades later, Wilson can’t muster the same fight against the COVID-19 pandemic. On Monday, Wilson confirmed that Threadgill’s, shut down temporarily in early April, is now closed for good. This comes after the closure in late 2018 of his downtown location, Threadgill’s World Headquarters. The end of an era in Austin is here.

Before the pandemic hit, you could walk into Threadgill’s and never know it hadn’t always been that way. Wilson worked doggedly to preserve the history and spirit of the place. He wanted you to feel a sense of authenticity. Threadgill’s was a living bit of old Austin—but not anymore. Reached by phone Monday afternoon, Wilson sounded tired and a little bit emotional. For the first several minutes of the call, he offered none of his usual wry humor and turns of phrases.

“It was just time,” Wilson said. “The place, we’ve been on a shoestring for a long time. Just all of a sudden, (closing) made more sense than continuing the struggle.”

Wilson owns the property that his restaurant sits on and he intends to sell that land rather than just let someone else run the restaurant. “I’ve had a couple offers (for the restaurant) and I just didn’t care for the odds that my people were going to be treated right,” he said.

It’s also a fair guess that, at least in part, Wilson is shutting Threadgill’s down because he doesn’t want to put his legacy in the hands of the highest bidder. 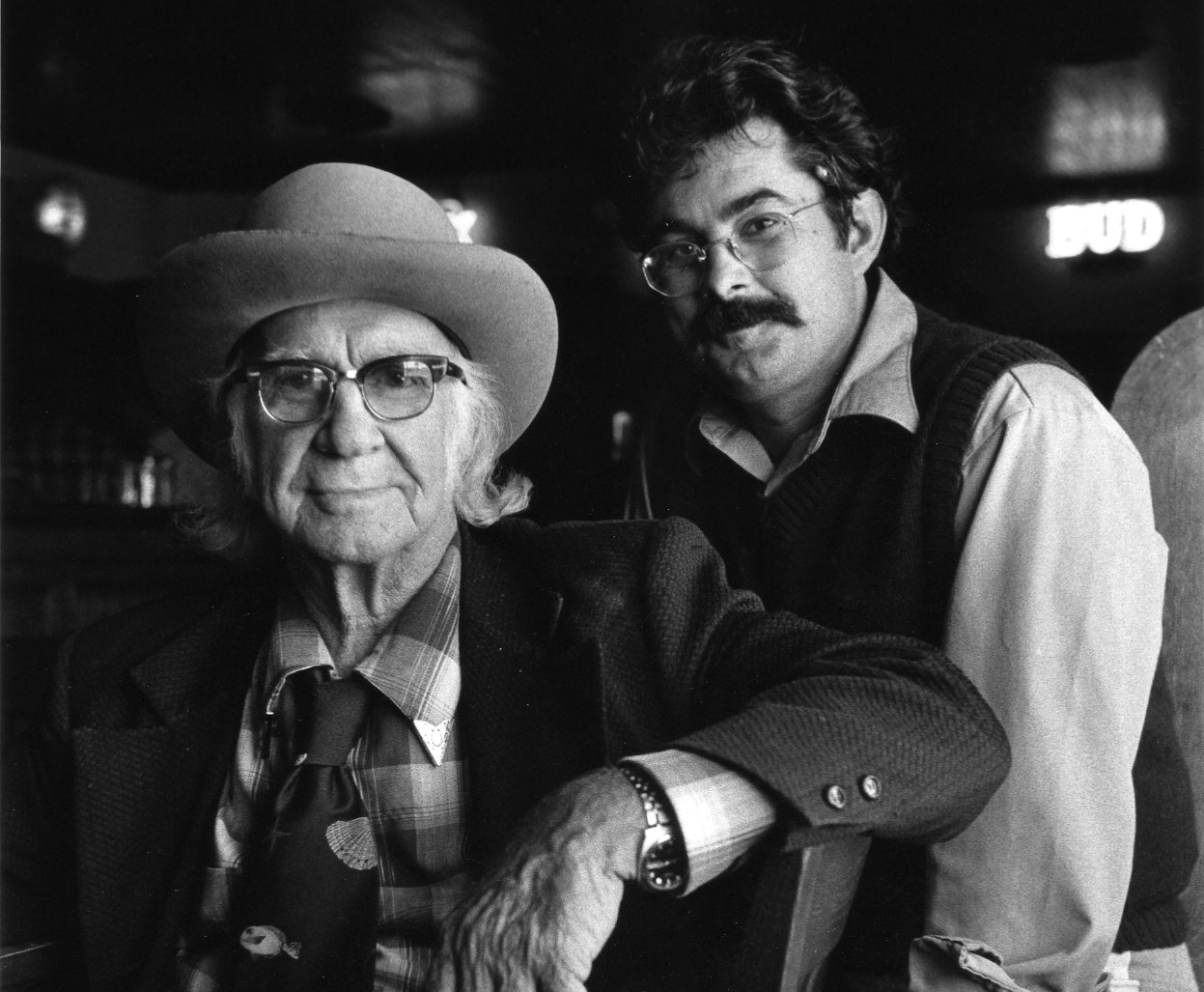 The convergence of Kenneth Threadgill and Eddie Wilson at the dawn of the 1980s was a cultural megamerger for Austin history and Texas music history. In 1933, Threadgill bought the Gulf service station where he worked and renamed it after himself. He secured the first Travis County beer license after Prohibition ended and made his new beer joint a musical hotspot and melting pot long before anyone was keeping Austin weird.

About three decades in, Threadgill became a mentor to the mercurial young singer Janis Joplin. By the end of 1974, Joplin was long gone; Threadgill’s wife, Mildred, had died; and the tavern was no longer worth the effort. Threadgill shut it down and pursued his singing and yodeling dreams.

By then, the Armadillo World Headquarters, located on Barton Springs Road, had established itself as the premier live-music venue in Austin. Wilson, once a manager for psychedelic rockers Shiva’s Headband and later the operator of the tiny-but-feisty restaurant The Raw Deal, had opened the Armadillo in August 1970. The ’Dillo became Wilson’s claim to Austin immortality, ushering in the cosmic-cowboy scene led by Willie Nelson and bringing a stunning variety of music and culture through Austin.

Wilson walked away from ownership of the Armadillo before the end of 1976, and by the end of the decade he was planning the move that would keep both him and Threadgill enshrined in the Austin consciousness up until today. For a while after Wilson opened his version of Threadgill’s, Threadgill would stop by every Wednesday night to sing until old age stopped him. He died in 1987 at the age of 77.

When asked Monday afternoon what he’s going to do now, Wilson said he doesn’t know for sure, but in a couple of months there’ll likely be another auction. “We’ll probably sell some stuff and come out with a little bit of something,” Wilson said.

He knows that’s a bit of understatement. He’s held two auctions already. The first, in January 2015, brought a standing-room-only crowd to Burley Auction Gallery in New Braunfels to pay premium prices for posters, beer memorabilia, and Armadillo World Headquarters treasures. The second was even bigger, bringing auctioneer Robb Burley to the downtown Threadgill’s in December 2018 to sell stuff right off the walls.

If Wilson’s carefully curated treasures at the North Lamar Threadgill’s are meant to convey authenticity, he nailed it in neon. More than a dozen such signs, some from beers 40 to 60 years gone, once painted the hardwood floor in streaks of light. In a previous interview, Wilson told the story of the very first neon sign he collected, after he saw it in a bar on the side of the highway in West, Texas.

“They had a wonderful Falstaff sign on the wall and I asked the bartender one time—out of a little three-beer buzz—what she would take for that sign,” Wilson said. “She said $100 and I couldn’t get the money out of my pocket fast enough. It’s still hanging on the wall at Threadgill’s and one of the best pieces I’ve got.”

Any auction is sure to be a success with a roomful of rare and storied items like that. Selling the property in this economy, Wilson acknowledged, is a “big, big question mark.” He has a real-estate agent working on it and he’s doing his part by staying optimistic. “I think we’re going to be a magnet for people looking to get back in touch with the good old days.” 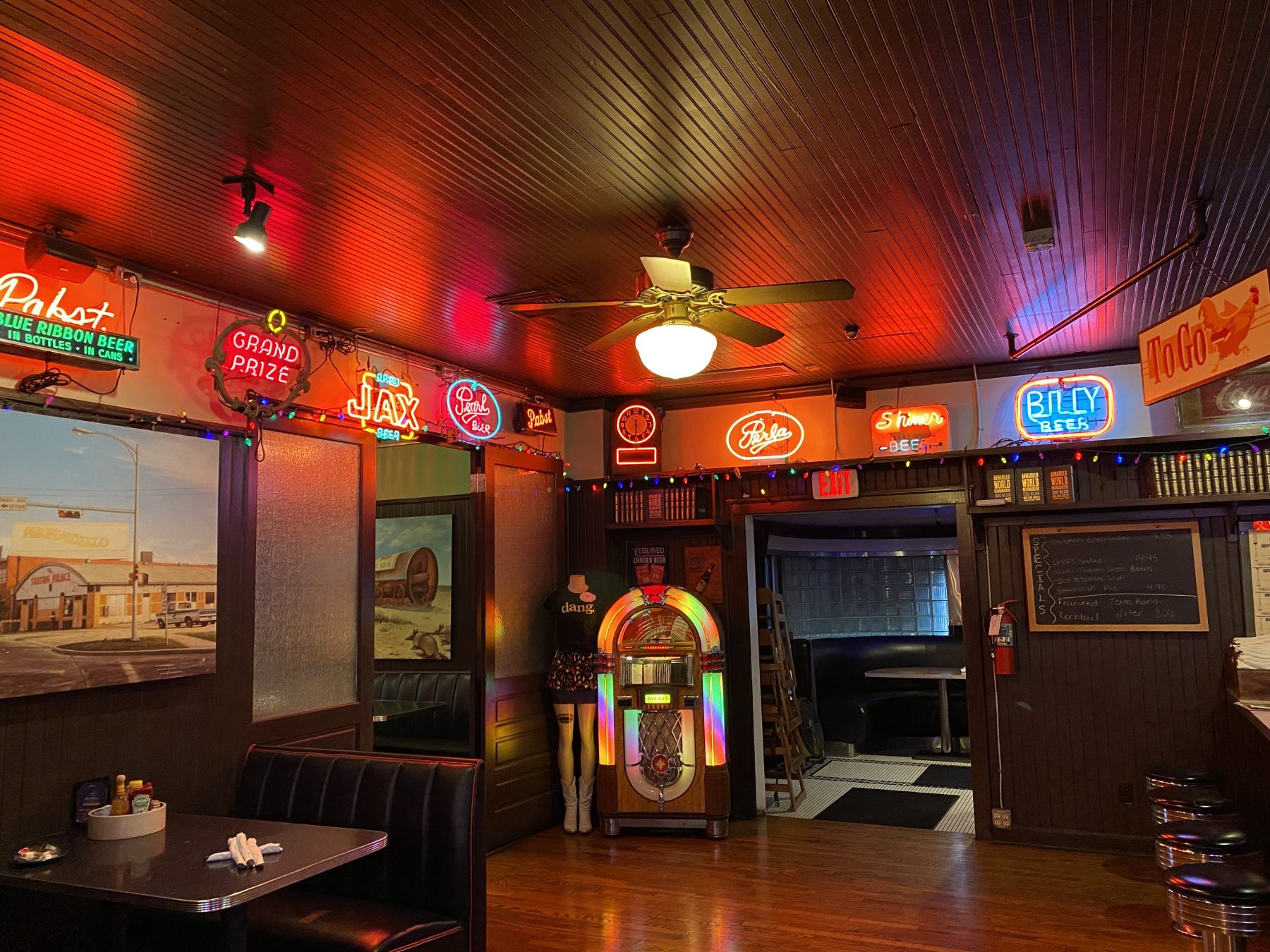 In a 1979 Austin American-Statesman story, Wilson painted a picture of Joplin-era Threadgill’s for reporter Rick Smith:

Serious drinkers, Wilson said, sat in the north end of the building, in front of the bar.
Threadgill usually manned the bar himself, yanking longnecked bottles from a round refrigerator … and popping caps off two at a time.
“He sat the bottles on a Lazy Susan on the counter and spun it around,” Wilson recalled. “You would take the bottle off, put your money on, and spin it back to him.”

“There’s a lot about Threadgill’s which is better than the original,” Wilson said in a recent interview before the closure. “Because the original was funky. Lord, it was funky.”

Wilson will turn 77 this November and he’s feeling every year. He said that missing out on a farewell party for Threadgill’s due to the COVID-19 pandemic is more of a relief than anything. “I’m not very much fun around a bunch of people having a lot of fun,” he said. “I’m always having to be the bouncer or the vice principal or some dang thing.”

Still, there will be a lot of reflection in the days ahead. Wilson has said before that he likes to walk the restaurant in the morning by himself and reminisce. Asked if the next time he does that will be especially emotional, he doesn’t shy away from admitting it. “I’m a bit of a romantic anyway,” he said, “so poignancy is worth its weight in gold.”