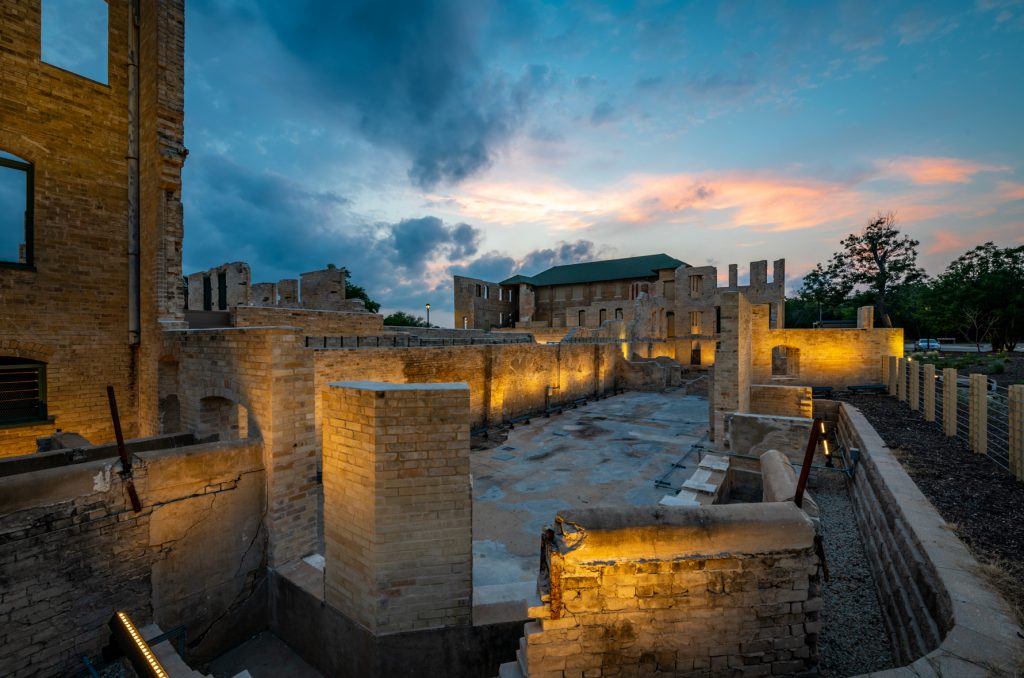 The Hot Wells ruin celebrates one year of being open to the public. Photo by Raleigh Meade

In the beginning of the 20th century, the Hot Wells Hotel and Spa was the place to stay for anyone stopping in San Antonio. With fine dining, lavish decor, and celebrity guests to match—ranging from movie star Charlie Chaplin to director Cecil B. DeMille to former president Theodore Roosevelt—Hot Wells drew folks from around the world to soak in its sulfur water baths and stay in its luxurious rooms on the Southside of San Antonio. However, the property fell to ruin after the hotel burned in 1925, and the spa burned in the ’80s and ’90s. The famed resort was lost to history.

In April 2019, the remains of the Hot Wells Hotel and Spa were reincarnated as Hot Wells of Bexar County, a new public park with free access to observe the fenced-off ruin, its remaining cream brick walls detailed with rows of windows.

The site’s preservation began in the ’90s when James Lifshutz, a local developer, purchased the Hot Wells ruins from Bexar County, gaining ownership of the place where his father swam as a child.

Lifshutz purchased the property to preserve the ruins and open it for the public to enjoy. This meant plugging the well that fueled the old spa—which some people still soaked in—because it was not compliant with the Edwards Aquifer Authority.

Others shared his vision. Kyle Courtney, a well-driller, and others in his industry volunteered to drill down to the original well and plug it. Judge Nelson Wolff helped with the process of donating the property to the county in 2015. 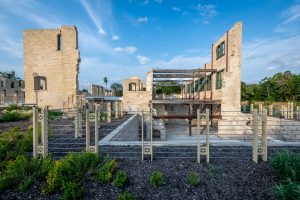 “We just wanted to be a part of bringing it back to life,” Courtney says.

In the short time it has been open to the public, Hot Wells has hosted several events led by the Hot Wells Conservancy, a nonprofit that aims to raise funds for the park and connect the community with Hot Wells. One recurring event, Reels at the Ruin, honors Hot Wells’ Hollywood past—it was the hotel of choice for the Star Film Ranch crew in 1910—by projecting silent movies on the side of the ruin. Last year, the Harvest Feast, another event, brought in area chefs and Model Ts.

The events have brought hundreds of people, many of whom have reached out to the conservancy to share their histories with the ruins. Cindy Taylor, the executive director of the Hot Wells Conservancy, says she frequently receives calls from people who have items from the Hot Wells Hotel and Spa, like old photographs, tea cups, or just stories.

“It’s the personal history,” Taylor says. “People want to share their memories of what they’ve heard from their ancestors, their families.”

Lifshutz still owns land north and south of the park with the hopes of creating a modern version of what Hot Wells once was with a bar, restaurant, and place to soak. His vision is gradually coming together. A new well has been drilled, and Lifshutz hopes to have the pool open this year; the icehouse bar is to follow suit.

For now, the park is still open for anyone wanting to explore, but public programming has come to a halt due to the COVID-19 pandemic. Taylor hopes to resume programming in the near future with a classic film projected onto the Hot Wells ruins under the San Antonio night sky.