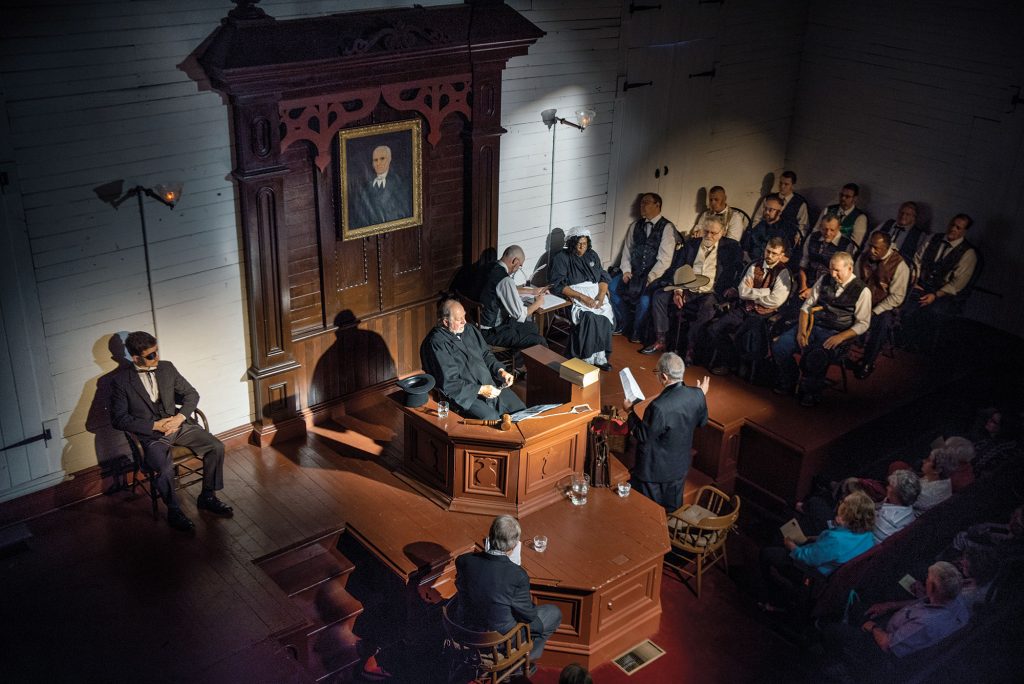 The Jefferson Playhouse transforms into an 1877 courtroom for the historical drama. Photo by Michael Amador.

In downtown Grapevine, novelist Jody Hadlock breezes into a busy coffee shop to talk about her new book, The Lives of Diamond Bessie, a historical novel about a murder that took place in East Texas in 1877. Since the book’s release in early April, the author has been busy with with book signings, speaking engagements, and interviews.

“It’s been crazy since my publication date,” she says. This Saturday, April 30, Hadlock will give a talk in Jefferson, the town where the murder occurred and grew into legend. Hadlock’s appearance takes place during the weekend of Jefferson’s 75th annual Historical Pilgrimage, which along with historic home tours and a parade includes performances of a play that reenacts the murder trial. After years of careful research, Hadlock hopes to correct the historical record in some areas.

“So much of the information you hear about or read is wrong,” she says. “On Wikipedia there is a lot of wrong information. After rumors have been building for 145 years, it’s very hard to change them.”

That isn’t deterring Hadlock from trying. With a background in journalism, she has meticulously uncovered a wealth of facts about the murder, its aftermath, and the people involved, filtering them through the sieve of her imagination to produce the novel. Period research infuses even the fictional scenes with ambient realism, as in the portrayal of “assignation houses” (high-end brothels) and the nascent women’s rights movement of the 19th century.

Hadlock’s website includes a lengthy bibliography of her sources, as well as information on what is fiction and what is fact in the novel. Here are some facts: Diamond Bessie’s birth name was Annie Moore, not Annie Stone as many claim. Both were real women who worked as prostitutes in Watertown, New York. Hadlock decided to include Stone as a separate character in the story, though there’s no historical proof she and Moore ever met. 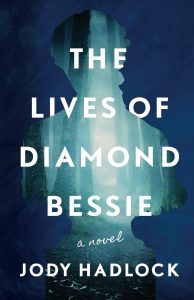 Through genealogical research, Hadlock also discovered Moore’s birthplace and baptismal record in Ireland, where her family lived before emigrating to America and eventually settling in Canton, New York. Moore left home and somehow fell into the life of a prostitute (the novel speculates it was related to an unexpected pregnancy). Then, in a real-world twist reminiscent of the 1990 film Pretty Woman, Moore met Abe Rothschild, a charming cad who worked as a traveling salesman in his wealthy family’s jewelry business. The two married, but instead of happily ever after, Moore got a bullet in the head.

The murder happened in Jefferson, which at the time was a major river port and larger than Dallas. Locals, dazzled by Moore’s looks and jewelry, gave her the nickname “Diamond” Bessie, (she was already using Bessie as either a nickname or a professional name). Officials charged Rothschild with her murder.

Hadlock’s fascination with the crime has its own history. It began on a 1992 visit to a museum in Jefferson while on a date with her future husband, who grew up in nearby Marshall. From a display case, Moore’s face gazed out from an old newspaper article. Hadlock, an Irving native and Texas A&M graduate, was a television reporter in South Carolina at the time. But she was captivated with the Diamond Bessie story, and the idea for a book germinated for years as the internet developed and made historical research easier. After some fits and starts, work on the novel took off in 2014, when an editor’s suggestion led Hadlock to find her voice, so to speak, by writing from Moore’s point of view—as a disembodied, earthbound spirit hungry for justice.

“After that, I finished a first chapter in two days,” Hadlock says.

In addition to Ireland, Hadlock’s research took her to Chicago and Hot Springs, Arkansas. Moore worked in brothels in both cities. In Washington state, Hadlock interviewed a woman in her 90s whose father had actually seen Moore on the streets of Jefferson. Only two months after Hadlock’s visit, the woman passed away.

The novel is garnering excellent reviews. But Hadlock tells me a few readers have expressed disdain for the supernatural angle. That may be an occupational hazard of bending genres. Yet that side of the story doesn’t feel heavy-handed, or even out of place, considering how Moore’s “spirit” seems to have led Hadlock to tell the story of this wronged woman in the first place. As Moore’s character says in the novel: “The spirit world blended into the real one so seamlessly, I had difficulty telling where one ended and the other began. If only the living knew how many spirits moved among them.”

Jody Hadlock discusses her novel, The Lives of Diamond Bessie, at Enoch’s Wine Cellar and Coffee House in Jefferson on April 30 at 4 p.m. Performances of The Diamond Bessie Murder Trial run April 28-May 1. Call 903-665-0737 for tickets. You can find more information about Jefferson’s Historical Pilgrimage here.