With the National Championship around the corner, writer John Lumpkin looks back at the Horned Frog’s colorful history 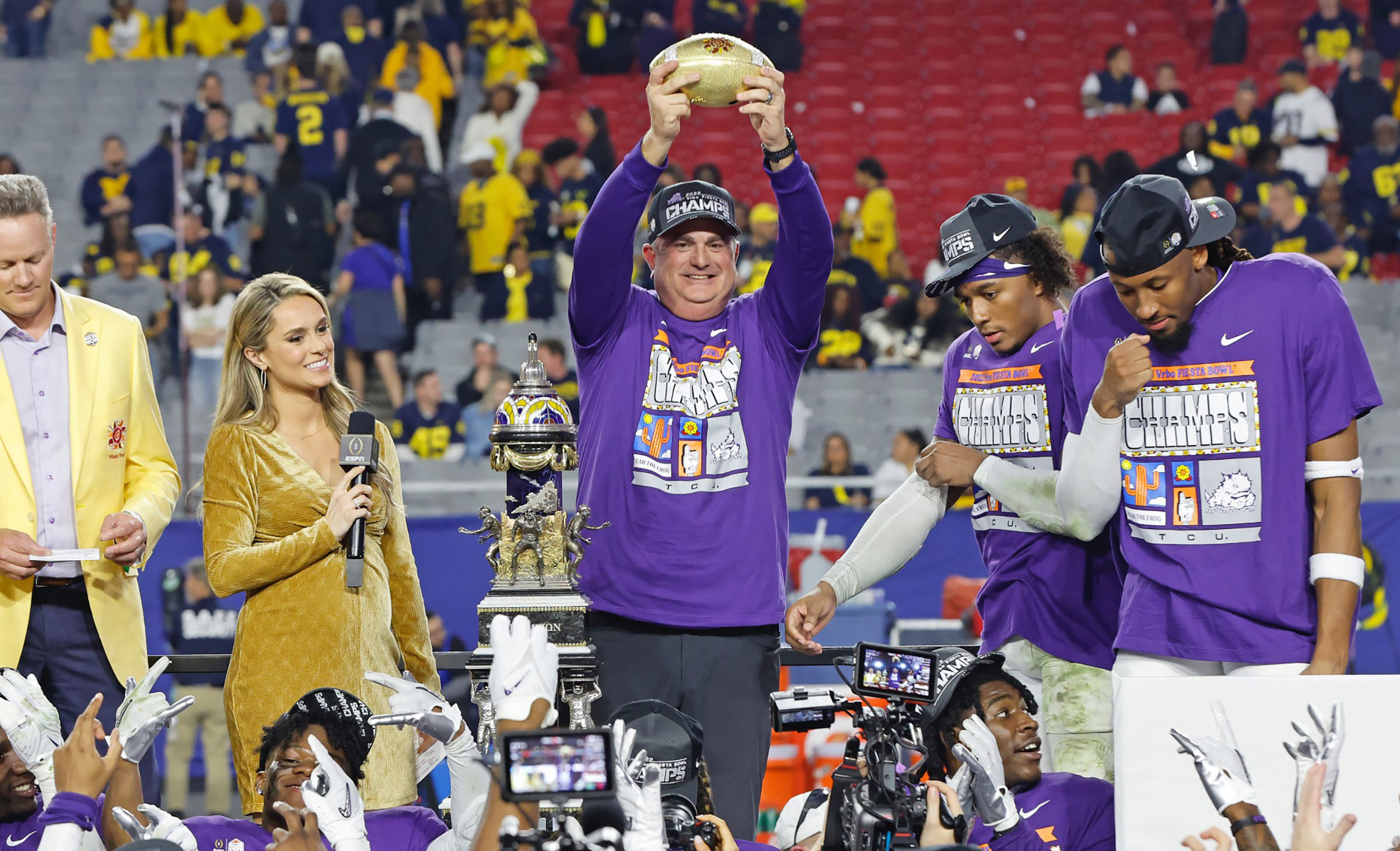 This week’s question for Texas college football fans: Will it be the traditional chant for the Texas Christian University football team, “Go Frogs”? Or is it the new T-shirt insignia “Go UnderFrogs,” alluding to this season’s oddsmakers who favored TCU’s opponents? Or even “Go HypnoToad,” part of Hollywood-inspired hype for the Horned Frogs as they play Monday against heavily favored University of Georgia for the National College Football championship?

Answer: all of the above.

Add to such slogans the massive purple-and-white “Fear the Frog” banner that the TCU student section unfurls on Game Day and you sense the mystique that surrounds the team’s unpredicted success in 2022. That includes an undefeated regular season and a College Football Playoff semifinal victory last Saturday over Big Ten behemoth Michigan. In doing so, TCU becomes the first Texas team to rise that far since 2014, when the playoff era began, even though it was projected to finish seventh in the Big 12 Conference and go unranked nationally before the season started. No other major college team in Texas came close this year, including the University of Texas Longhorns and the Texas A&M Aggies.

It has been a roller coaster for generations of TCU fans and players. The ups and downs have included two 1930s-era national championships, UT coach Darrell Royal labeling TCU as a “cockroach” for upsetting the No. 1-ranked Longhorns in 1961, routs by Texas A&M in the 1980s, and banishment to the hinterland of second-tier college football conferences when the Southwest Conference dissolved in 1995-96. The nadir was reached in the ’70s: 20 consecutive TCU losses in 1974-75 before a season-ending victory over Rice and then an 0-11 record in 1976.  The journey back was aided by an unheralded recruit from Waco’s University High, All-American LaDainian Tomlinson (1997-2000), who along with being a Heisman finalist became college football’s sixth-leading career rusher on a team with three winning seasons.

In 2010, quarterback Andy Dalton and coach Gary Patterson flipped the 1976 script, going 12-0 in the Mountain West Conference and beating Wisconsin in the Rose Bowl to rise to No. 2 in the Associated Press’ final poll. An aerial nighttime shot showed half of the 100,000-seat stadium in TCU purple and the other half in Wisconsin red, a phenomenal turnout for a private school with fewer than 9,000 undergraduates and 90,000 living alumni.

The following fall, TCU was invited to join the Big 12, which shunned it originally. Three years later, the Horned Frogs would be co-Big 12 champions with Baylor, win the Peach Bowl, and finish No. 3 in the AP’s final poll.  So, the 21st-century fans have had their moments, though nothing compares to 2022 and TCU’s fourth-quarter comebacks—especially the last-second field goal to beat Baylor on Nov. 19. More than one Frog social media post joked about needing defibrillators handy. (The “unreal” field goal comes around the 3:50 mark in this video.)

“I watched on TV every minute of every game this team played and about halfway through the season, I realized this wasn’t good luck or a fluke or getting the breaks,” says legendary CBS anchor Bob Schieffer, a 1959 TCU journalism graduate for whom the school’s College of Communication is named. “What we are seeing was a great football team.”

Schieffer and spouse Pat, a TCU Trustee Emeritus, live in Washington, D.C., but find ways to attend TCU games in person—one being the 2010 season finale in Albuquerque, New Mexico, where TCU received the Rose Bowl bid and quarterback Dalton strolled across the field post-game holding a rose stem.

I was there as well for the 66-17 demolition of the New Mexico Lobos, having moved to TCU’s journalism department after 37 years with the Associated Press. Other memorable road trips include one in 2009 as director of the TCU journalism program against my alma mater, the University of Virginia, in Charlottesville. Bob was in a suite visited by famed author John Grisham while I had to choose between sitting with UVA fraternity brothers or with my spouse, Eileen (TCU Journalism, Class of ’68), as part of the TCU contingent. I asked a longtime newspaper mentor where I should be.

He quipped, “Vote your paycheck.” That worked out because TCU won 30-14 enroute to another undefeated regular season, the only loss being in the post-season Fiesta Bowl.

Divided loyalty is no stranger to another TCU fan, Fort Worth newspaper executive Wes Turner, an alumnus and “rabid” supporter of the University of Texas. He was in Arizona for TCU’s semifinal playoff victory over Michigan on New Year’s Eve. “It’s one of the most exciting games I’ve ever been to,” he says. “I’ve been to two national championship games with UT and I was with TCU when it beat Wisconsin, and this rivaled any game I’ve attended in my life.”

Like me, Turner married into a family with TCU roots—his mother-in-law graduated with TCU’s storied 1930s quarterback Sammy Baugh. My spouse is one of 11 family members who attended TCU, including her parents and our older son. As a toddler, she remembers marveling at “Addie,” the former name for TCU’s SuperFrog mascot.

Turner’s daughters graduated from TCU’s Harris College of Nursing and one is a professor there. “I always told [coach] Gary Patterson that I was an ‘11-1’ Horned Frog and would pull for TCU every game except Texas. This year, I broke that vow because it meant so much to that program and that university and to Fort Worth,” he says of TCU’s 17-10 victory in Austin.

It wasn’t always so. When Turner was growing up in Austin, “TCU was probably my least favorite team,” he says. As a gift for his 11th birthday, he attended the 1961 6-0 upset of UT by TCU, leading to Darrell Royal’s cheeky “cockroach” quote. Four decades later, he met Charles “Buddy” Iles for the first time at a church event in Fort Worth after he became publisher of the Star-Telegram. “You broke my heart,” said Turner to Iles, who caught the flea-flicker 50-yard pass from TCU quarterback Sonny Gibbs for the game’s only touchdown. Iles introduced Turner to the TCU boosters Frog Club—and they remain best friends.

Such irony is no stranger to Texas football, though perhaps the biggest would be TCU winning a modern-era national championship. Patterson, whose two-decade tenure led TCU from the collegiate football wilderness, was fired in 2021 after four lackluster seasons, to be replaced by Sonny Dykes after successful but not transcendent seasons with lower echelon competition at SMU in Dallas.

Voila! Dykes has been named 2022 College Football Coach of the Year by the Associated Press while Patterson became a defensive consultant for the Texas Longhorns. Dykes demoted Patterson’s starting quarterback, Max Duggan, for TCU’s opener, but Duggan replaced Dykes’ choice after an injury and is this year’s Heisman Trophy runner-up, heaving passes to future NFL first-round draft choice Quentin Johnston.

All of which would have been great fun for perhaps TCU’s most adamant fan, the late author and sportswriter Dan Jenkins, a 1953 TCU graduate and member of its golf team. “He was a Texan in his heart and bones…His undying love for TCU was part of that,” Sally Jenkins, his daughter and a sports columnist for The Washington Post, once said. As a novelist, Dan was prescient about today’s Horned Frogs. In You Gotta Play Hurt, he wrote of a fictional TCU team that played Notre Dame in the Cotton Bowl to a 21-21 tie, winning a split pollsters’ vote for the national championship before the College Football Playoff era.

My other favorite TCU football fan who isn’t around to enjoy this season’s success is the late Lon Evans, a dominating all-Southwest Conference lineman at TCU in the early 1930s. He became an all-pro and future Green Bay Packers Hall of Fame inductee before returning to Fort Worth to serve as the “Purple Lawman,” Tarrant County’s sheriff for 24 years. I covered Evans in the late 1960s as a Fort Worth Star-Telegram reporter, knowing he was never far from his TCU roots. On weekends, he would accompany the team on away games “to provide security,” as he put it. The last time I saw him at a TCU game was bittersweet. Using a wheelchair because of complications from diabetes, he rolled up close to the railing of the end zone walkway as I stood nearby. Alas, the Frogs were 2-8-1 in 1992, the year that Lon passed.

TCU’s most famous coach, Dutch Meyer, who won the undisputed national championship in 1938, was an assistant when Evans played. Father of the modern-day forward pass, Meyer also was the author of the renowned exhortation to his team: “Fight ’em until hell freezes over. Then fight ’em on the ice.”

This era’s version of Horned Frogs won’t be playing on ice when they face the Georgia Bulldogs Monday night in warm Southern California, but they will be the first TCU team since Meyer’s 1938 squad to have college football’s top prize in their grasp.

“They belong in the national championship and they’re going to win,” says superfan Bob Schieffer. “And when I sit down to watch, as always, I will be wearing my purple socks.”