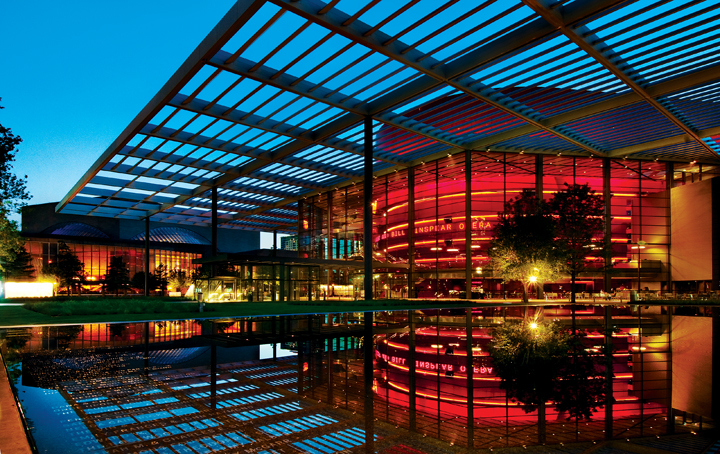 I’ve been hearing exciting news about changes in downtown Dallas and the city’s neighboring Arts District, and on a recent weekend trip to see developments firsthand, I witnessed evidence of a spirited urban renaissance.

My home base for the weekend, The Joule hotel represents adaptive reuse and urban revitalization at its savviest. Built in 1927 in Neo-Gothic style (complete with protective gargoyles) to house the Dallas National Bank, the building experienced a rebirth when new owners hired interior designer Adam Tihany and architectural firm ARCHITEXAS to resurrect the once-grand building into a boutique hotel.  The team restored the building’s distinct silhouette and injected the spaces with modern style—and in some cases, modern whimsy. The hotel opened to guests in 2008.

The standard rooms here feature Gilchrist & Soames bath products, luxurious linens, and other thoughtful amenities, and on the walls hang original artworks from such contemporary artists as Ellsworth Kelly and Joseph Stashkevetch, many of whom pay wry homage to fashion, advertising, and popular culture. (The flagship Neiman Marcus is next door, and in a fanciful touch, The Joule installed a line on each telephone to ring the store directly.) Downstairs, in the warmly lit lobby, a 20-foot-high, slowly rotating water wheel provides a languorous ambiance for enjoying the hotel’s library of books on art and fashion, or for watching the activity on the street. Vacation, commence!

So, after a leisurely brunch of salmon and sautéed greens at the hotel’s restaurant, Charlie Palmer at The Joule, I set off with my husband to explore the nearby Arts District.  We strolled past the glamorous, 21-story Adolphus Hotel, built in 1912 by beer baron Adolphus Busch; admired the restored Pegasus atop the 1921 Magnolia Hotel; and then wandered northwest a few blocks to the perimeter of the 19-block Arts District.

Here, such long-established institutions as the Dallas Museum of Art, the Nasher Sculpture Center, the Meyerson Symphony Center, and the Crow Collection of Asian Art have recently been joined by the new AT&T Performing Arts Center, which includes the Winspear Opera House, distinctly modern with its red glass façade and transparent sky canopy; the gleaming, metal-clad Wyly Theatre; and several outdoor performance spaces and parks. We toured the DMA and dropped by the Nasher to watch the clouds drift across the aperture in the granite ceiling of James Turrell’s Tending, (Blue), and then chanced into a high school orchestra competition at the Meyerson. The acoustics in this hall made the talented young mu-sicians sound like seasoned professionals.

When we strolled past the new opera house, preparations were underway for that evening’s sold-out performance of Mozart’s opera Così fan tutte. Later, as we sipped cherry-infused sangria at the glowing, emerald-and-onyx bar of Chef Stephan Pyles’ new Arts District restaurant, Samar, we toasted the opera-goers next to us, who’d been lucky enough to score tickets. Samar’s small-plates-focused menu lends itself to pre- (and post-) performance dining, with dozens of items that riff on Indian, Eastern Mediterranean, and Spanish cuisines costing less than $10 a plate. The decor, executed with vibrant tapestries, light fixtures imported from Syria and Lebanon, and Moroccan-inspired jewel tones, contributes a festive energy.

We had plans to dine that evening in the nearby Bishop Arts District—a burgeoning neighborhood just across the Trinity River in Oak Cliff—so despite the many temptations on Samar’s menu, we stopped after sangria and appetizers this time. A plate of Indian flatbread took on unusual character with spinach and goat cheese, and a trio of traditional Mediterranean spreads (chick-pea hummus, a thickened yogurt dip called labne, and an eggplant-and-tahini dish called moutabal) gave us an idea of the kitchen’s sophistication.

Before we left Dallas in our rear-view mirror the next morning, we explored the newly renamed Riverfront Drive (formerly Industrial), a street that runs parallel to the Trinity River and currently boasts an eclectic mix of liquor stores and bail bondsmen, antiques shops and vintage boutiques, and increasingly—loft apartments. Retailer John Bacile, whose 12,000-square-foot shop, Antiques Moderne, offers an array of mid-Century furniture and decorative items, put the street’s changes into perspective. In the five square blocks surrounding his shop, he told me, more than 150 boutiques and antiques shops already comprise what locals know as the Dallas Antiques and Design District. But dozens of warehouses, he said, have recently been rezoned for condos and additional retail spaces, and already, he’s seeing increased foot traffic from residents and visitors.

Dallas constantly reinvents itself, it seems. The next few years promise dramatic changes for the entire central-city area. Future plans call for citywide access by metro rail, along with a landscaped, five-acre park suspended across busy Woodall Rodgers Freeway.  And construction began in May on a much-anticipated, 400-foot-tall span across the Trinity River between downtown and Oak Cliff. Designed by Spanish architect Santiago Calatrava, the bridge (scheduled to open in 2011) suggests a graceful, 3-D Spirograph.

I can’t wait to see what the next few years bring to this interesting pocket of Dallas.