See “Frying Pan Fire” and other works that draw on her experiences as a fourth-generation rancher at the solo show Way Out West. 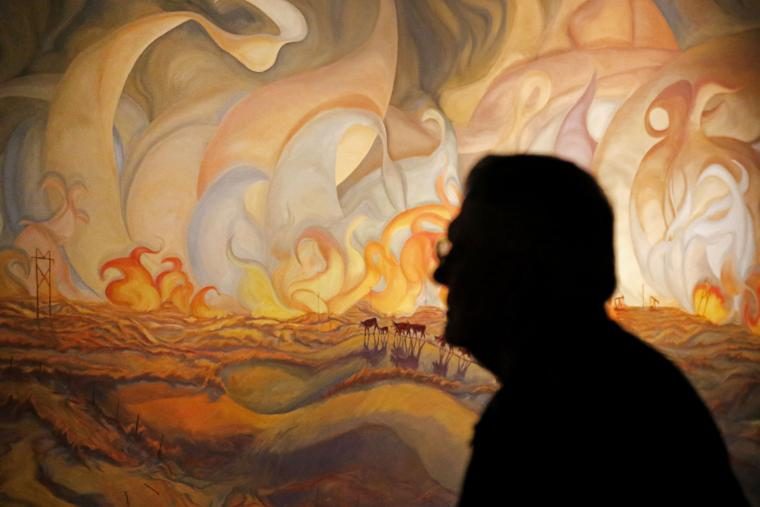 In Winkler County on the Texas-New Mexico border, Alice Leese supports her art habit as a painter with her day job as a cattle rancher. She’s part of the fourth generation working alongside the fifth and sixth on the YT Ranch, land her family has owned for more than 100 years. In her paintings, the animals and landscape in West Texas—including windmills, pump jacks, cows, and horses—are frequent subjects. Leese has been painting for 39 years, and she returned to school at age 53 to work on a master’s degree in studio art at Sul Ross State University in Alpine. Recently, Leese was awarded artist residencies at Fort Union National Monument in New Mexico and Hawaii Volcanoes National Park.

Earlier this month, Leese took a break from branding calves and traveled to Alpine to deliver paintings for the Museum of the Big Bend’s 34th annual Trappings of Texas exhibit and sale of contemporary Western art and custom cowboy gear. Her work can be found in two other exhibits this summer: the American Plains Artists 35th Annual Juried Exhibit and Sale at the Fort Concho National Historic Landmark in San Angelo and her solo show Way Out West at the Ellen Noël Art Museum in Odessa. Texas Highways spoke with Leese about her art and influences, how beef has been selling during the COVID-19 pandemic, and how she balances studio time with ranch life.

For the solo show in Odessa, you made a specific painting called the “Frying Pan Fire.” Can you tell me why you decided to work on that?

Leese: That happened in 2011, when almost every county in Texas had a fire at one time or another. That was the year of the really horrible drought, where we ended up with a half-inch of rain for the whole year. It was so dry. It started in New Mexico, burned half of Andrews County, burned on into Winkler County, and ended up burning 100 square miles. Some of that land even now has not recovered. It was just so devastating to all the caretakers, the ranchers, everybody who worked on the land and had cattle. Just to see all that grass burn up, the wildlife was just decimated, and it had such an impact. I went right away and made a drawing. I waited almost 10 years to do the large painting because I was afraid that if the people who were there and who fought that fire saw that big mural, you know, it might not be received very well because it wasn’t a good time. 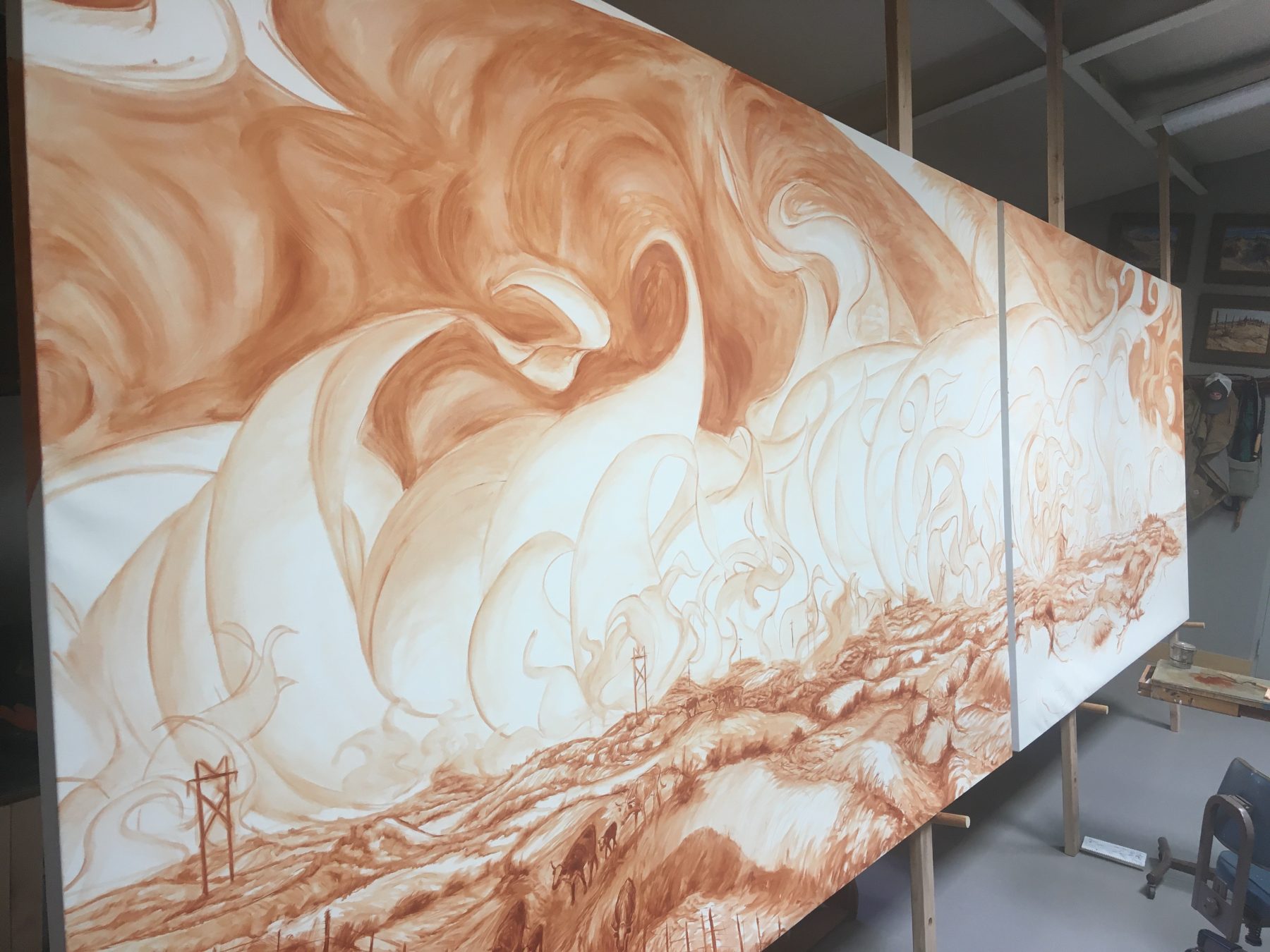 It was too soon.

Leese: You know, I paint bucking horses and rattlesnakes and all kinds of things I don’t like. I don’t like fire, but it was such a visual that I think it just needed to be painted. I think it helps to heal. Most of the land has recovered, but that fire was so hot that it sterilized some of the soil. So, there were no organisms in the soil to build it back up. There were six or eight years when the wind blew, we still got ashes and dust from that fire. We were sweeping it up out of the windowsills. It was just a time we will never forget.

What is it about plein air painting that draws you?

Leese: You get a better feel of what the land is like. You’re not painting a photograph of the land; you’ve actually been there. If I go and take my canvas and do a plein air sketch, I can use it to build the larger studio work, or I can just take that plein air painting to completion. I’ve been painting for 39 years, and I’ve always taken a sketchbook with me and done watercolor sketches, and then taken those back into the studio and used them to make larger studio works. When you’re there on-site painting, you’re not painting a picture of that place; you’re painting what it feels like to be in that place. To me, that’s just profound.

Do you return to the same places, and does it feel different?

Leese: Yeah, things change. Weather, the different seasons. In Way Out West, I go back to the same place on the south side of what we call Blue Mountain, which is not really a mountain; it’s a mesa. But in Winkler County, where everything is flat, it’s a mountain to us. I go back to the same side of the mountain, and I paint the same rocks every season of the year. In the show, there’s winter and fall.

Do you work in other ways?

Leese: There are some times when I have to work from a photograph, like for commissions and things. Sometimes people will send me an iPhone photo and they say, “Will you make this into something in your style?” So, I’ll take the iPhone photo, make a drawing from it, take all my notes, and then work from the drawing and the photo. Having as many resources as I can helps to make a better painting.

You’ve had two residencies with the National Parks Arts Foundation. Did those influence or contribute to what you’re doing?

Leese: Definitely. Those residencies gave me a chance to get out and do plein air painting, and at Fort Union I came back with probably 20 paintings already in progress. From all those, I was able to make a large painting [“Fort Union”] that’s at the solo show at the Ellen Noël now. And then Hawaii, getting to be on-site painting every day and getting to concentrate for almost 30 days on painting, it makes you work on your creative process.

Did you grow up on the ranch where you live now?

Leese: I’m fourth generation on the ranch, and I’m working alongside the fifth and sixth. My great-grandfather came to Odessa from Colorado with a herd of sheep and started the YT Ranch. Now my brothers and my cousins and I live on the ranch and run it. We started out with sheep and then switched to horses, and now it’s cattle. 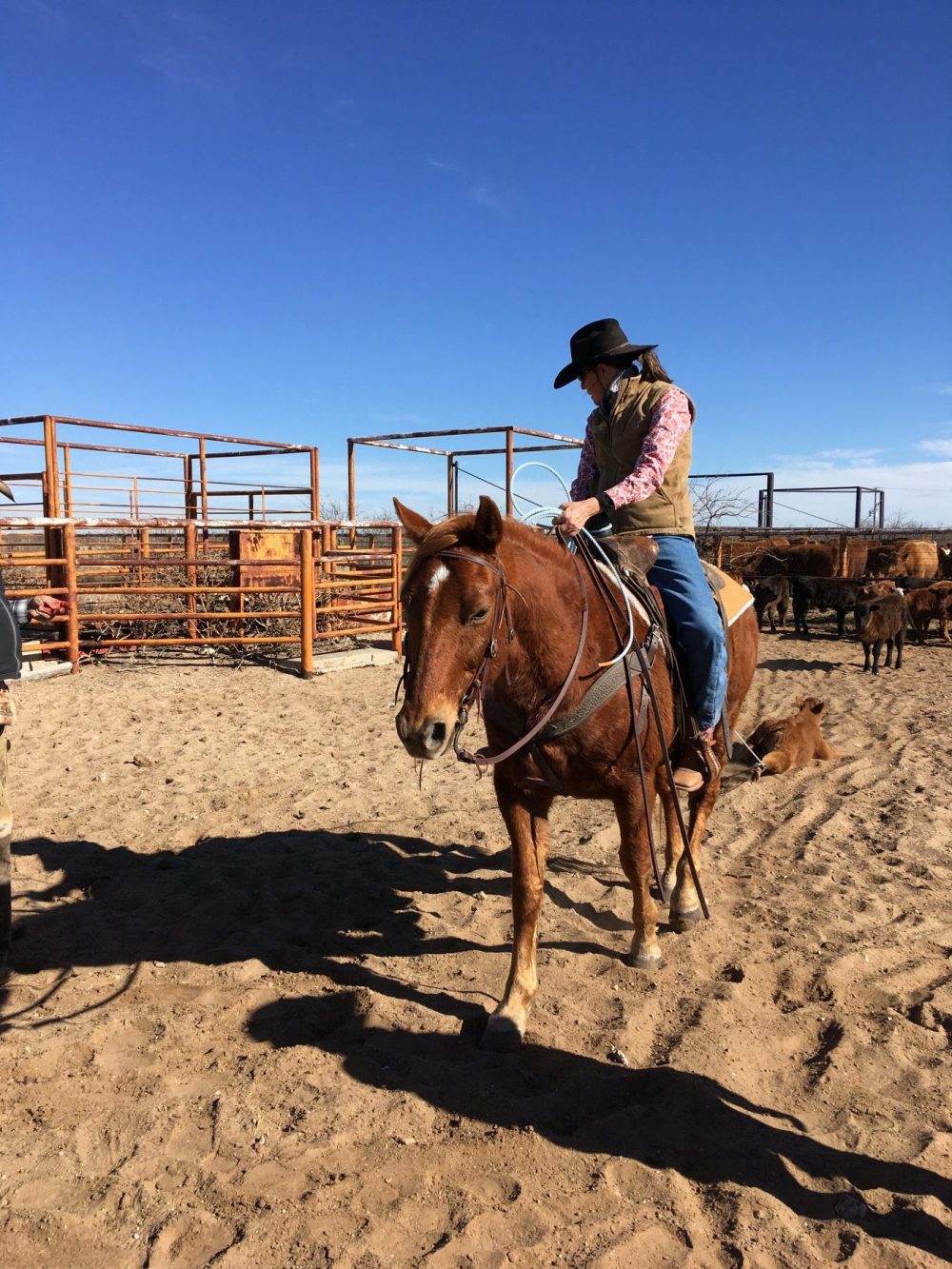 Alice Leese is a fourth-generation rancher on her family’s YT Ranch. Photo by Rob Leese.

On your Facebook page, I was reading about your beef sales. Are they always this strong or was that partly due to COVID-19?

Leese: We do grass-fed, grass-finished beef, and that’s just a very small percentage—maybe 10% of our total crop. The rest is a commercial herd. But we had a run on beef. When all the stores ran out of beef, ground beef especially, we had nine freezers full, and we sold out in one week. I’m glad we were able to fill that need, but people are still calling, wanting ground beef. Grass-fed beef tastes good. I think it’s better than what’s in the store. Our herd gets nothing but native pasture and grass, so it really has a nice mineral beefy flavor.

How do your painting and ranching life overlap? Or don’t they?

Leese: Oh yeah, they do. I’m very fortunate. Ranching kinda supports my art habit. My schedule is so flexible with the ranch that I have time. If I have deadlines coming up, I can take off and go make art for a while until I get caught up and then go back to ranching. We just finished up two weeks of calf branding, so I was glad to come to Alpine. I’m gonna spend the night here and rest.

Do you ever feel like they’re competing with each other?

Leese: Yes. Sometimes I’m working in the studio and my husband will call and say, “Will you help me come leather a windmill? The cows are out of water.” And we have to go work on this windmill, or something happens and we have to move cows. So, sometimes it’s a little frustrating. But I’d say, on the whole, it meshes really well.

What or who is inspiring your work right now?

Leese: An early influence was a mural in the Odessa post office, Tom Lea’s Stampede. A lot of the Big Bend-area plein air painters: Alexander Hogue, Jerry Bywaters, the Dallas Nine. They were a big influence because they painted the desert, the Southwest, Texas, and it looked like what I saw every day. To some people, it’s not very beautiful, but to me, if you’re not driving through it at 70 mph, it is really beautiful if you take the time to look at it. And some contemporary painters like Wayne Thiebaud. Everybody knows about his paintings of food, but his landscapes are just phenomenal. He’s a big influence with his brushstrokes. They almost look like you could eat them. And Instagram—I follow so many painters. I’m just opening up my phone and getting to see what people are doing right now. I think that all across the board, every artist in America instantaneously knows what everyone else is doing. It’s kind of interesting.

To be exposed to so much art right now?

Leese: Right. I think it helps people grow to see what someone else is doing.