Where Independence Was Won 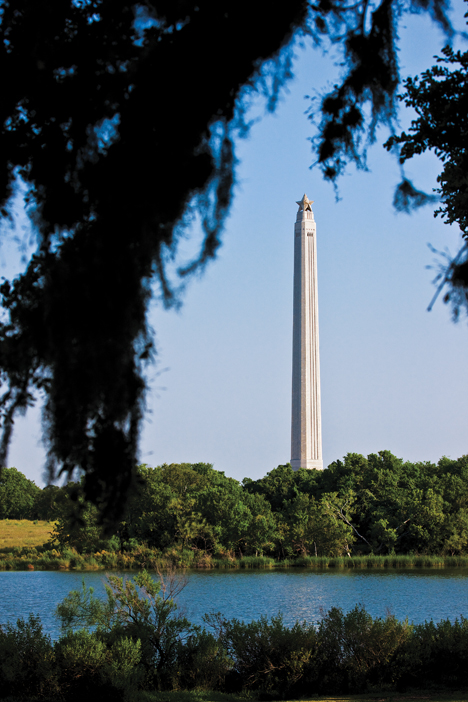 in 1983, the area under water would have been low-lying ground and part of the battelfield. Photo by J. Griffis Smith

What would Sam Houston say if he laid eyes on the San Jacinto Monument today? The height of the tower certainly inspires, and the majesty of the soaring octagonal tower is formalized by the 1,800-foot-long, 8.4-acre reflecting pool. That image acknowledges power and creates a sense of potential. From a distance, the monument is an abstraction: It does not literally represent the battle that crowned Texas’ quest for independence with Houston’s decisive victory over Santa Anna’s troops and the subsequent capture of the Mexican commander. Up close, you’ll see that the base is incised with text and images that recount Texas’ history.

The monument is definitely a product of its time,” explains Rusty Bloxom, site historian for the San Jacinto Battlefield State Historic Site. “It’s from the ‘old school’ of historic monuments, which basically demands that you build the largest, most impressive structure possible. It follows the Victorian tradition established in the late 1800s, exemplified in most of the Civil War monuments around the country.”

And certainly the San Jacinto Monument wins the size competition: The 570-foot, eight-sided shaft, topped by a 34-foot, three-sided, nine-point star, stands as the tallest monument tower in the world, taller than the Washington Monument in Washington, D.C., by 15 feet and nine feet taller than the runner-up in Korea. The star atop the monument, built in place, weighs 220 tons.

Inside the base of the monument, you’ll find the San Jacinto Museum of History, which focuses on the history of the Battle of San Jacinto as well as Texas culture and heritage. Approximately 250,000 visitors make the trip to the 1,200-acre park and historic site each year. Those who ride the elevator to the observation deck, just beneath the star atop the tower, can see downtown Houston’s skyline more than 20 miles away on a clear day. On any day, you’ll take in sweeping vistas of the surrounding battlefield, where a total of fewer than 2,000 soldiers exchanged fire more than 170 years ago. The panorama is punctuated by the adjacent Houston Ship Channel and Battleship Texas.

“The monument sits atop a low ridgeline that, in 1836, separated the Mexican camp from the Texian camp,” says Bloxom. Because the site has not been extensively developed, it’s possible to see that the landscape is similar to the way it was in 1836. You can imagine the drama of the 18-minute battle, and the deadly game of tactics that ensued, with Texian scout Deaf Smith destroying Vince’s Bridge so Santa Anna’s army could not escape.

The monument welcomed its first visitors in 1939. The limestone that faces the monument, known as Texas Cordova shellstone, was quarried in the Hill Country not far from Austin. After an initial 57-hour continuous concrete pour, during which 100 cubic yards of concrete was poured each minute, construction required three years, starting during the state’s centennial year. The grand opening of the monument was the culmination of a more-involved process that meandered through the channels of government for more than 50 years-starting with the Texas Veterans Association first proposing a formal monument after the Civil War, through the time the state of Texas purchased the land in the 1890s.

“The site now offers a venue for every interest,” says Larry Spasic, President of the San Jacinto Museum of History. “Some people come to picnic, others come to watch the huge vessels passing by in the Houston Ship Channel. Naturalists take advantage of the boardwalks through the restored wetlands, and still other visitors are mainly interested in architecture.”

The San Jacinto Museum of History’s collections span more than 400 years of Texas history, starting with the arrival of the Spanish and continuing through the 19th Century. The collection contains more than 100,000 objects, 250,000 documents, 10,000 visual images, as well as a 35,000-volume rare book library.

The monument has been recognized as a National Historic Civil Engineering Landmark by the American Society of Civil Engineers. Spasic explains that some of the construction techniques for the monument, such as the use of special scaffolding, had to be invented on site. Even though the national award for engineering feats is impressive, most visitors recognize the San Jacinto Monument as the place where Texas’ independence was won.