Dive into this Hill County getaway 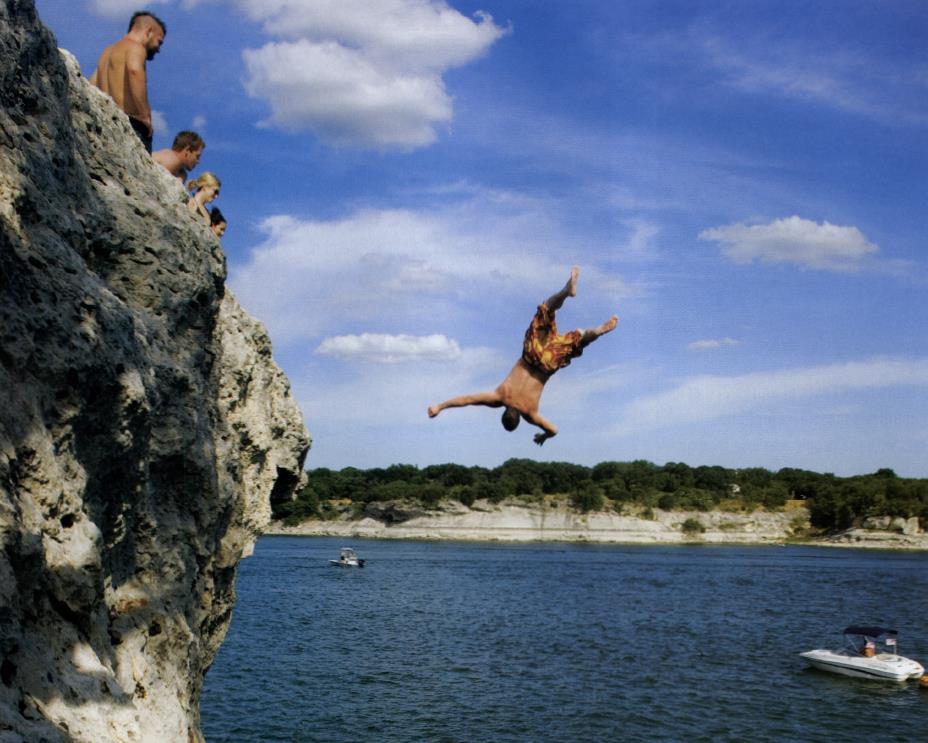 The evening sun casts a rainbow of colors on the white cliffs surrounding Lake Whitney, turning the limestone golden and throwing a crimson hue over the water’s surface. My husband, Lloyd, and I have just arrived at the Arrowhead Resort on the lake’s eastern shore, and a peculiar  welcoming committee attempts to upstage the spectacular sunset. Three of the resort’s 18 peacocks greet us in all their brilliant glory, flashing fantails and strutting proudly. Lake Whitney is where I learned to camp, fish, and swim on family trips long ago, and we’re here this weekend to revisit one of my favorite childhood haunts.

We stow our bags in our cabin and follow the aroma of baking bread to Mel’s Steakhouse, the resort’s restaurant, where we meet owners Melinda and Gary Crow.

The couple purchased the 22-acre property in 1998, adding the restaurant and transforming the simple fishing camp into a quiet resort with 20 cabins
and 11 RV hookups. “At one time,” Gary tells us, “there were more than 40 lodges around the lake. Many closed in the Sixties, but several places have recently been remodeled and reopened. Lake Whitney is experiencing a comeback.”

The Crows’ busy eatery is packed. With its fruit-patterned tablecloths and latticework decorating the walls, the dining room has a comfortably homey,
kitchen-like atmosphere. At the grill, Melinda, wearing an apron with “The Skinny Chef” stitched on the front, is seasoning her Abilene-style steaks. “In my
travels,” she says, “I discovered that Abilene restaurants grill the best steaks. The trick is using a dry rub before throwing them on the grill. I do the same, but use my own secret spices.”

We soon learn that there’s another reason to come to Mel’s. On Fridays, Melinda lays out an impressive buffet. The chicken-fried steak, grilled pork chops, fried catfish, steamed veggies, sour cream potato salad, salad bar, and homemade rolls are too alluring to pass up. The pork chops, also grilled Abilene-style, are seasoned with a perfect mix of garlic and pepper, and the catfish is crispy and sweet. We save room for Melinda’s signature dessert, fried bananas drizzled with a sweet, buttery sauce and topped with vanilla ice cream.

The next morning, while Lloyd takes his time waking up with coffee and a newspaper, I meet my sister Krisann, who lives nearby, at Dick Weinkauf’s Outpost in Laguna Park, where the Brazos River runs under FM 2114. The Weinkauf family has been renting canoes here for more than 30 years. So we can begin our eight-mile journey down the Brazos, Dick drops us offbelowthe Lake Whitney Dam. Soon, we’re meandering along limestone bluffs. Cliff swallows flitter back and forth, responding to the twittering calls of their chicks. Little blue herons, snowy egrets, and great white egrets forage in the shallows along the riverbank. I spot a solitary green heron crouched on a branch, hidden in the brush. Around noon, we moor the canoe on a sandbank and picnic right there in the middle of river. Nearby folks are fly-fishing, and in the distance, we hear the roar of airboats as they make quick work of river travel. The sun now shines brightly and we take a refreshing dip before continuing on. Less than five hours later, we paddle up to the dock, and I bid my sister adieu.

That evening, Lloyd and I head downtown for dinner at a restaurant I’ve heard a lot about, the Colorado Street Grille, housed in what once was the Carmichael’s Racket Store, the first five-and-dime in Whitney. In the ’50s it became the Middlebrook Grocery and Market and served the community for almost 30 years until it finally closed. In-1999, Dallasites Andy and Melody Pryor bought it with the intention of making it their second home. “We fell in love with the old building, but soon realized that we’d rather live closer to the lake,” says Andy, a graduate of El Centro Culinary School in Dallas. “That’s
when I got the idea to turn the place into a restaurant.” Andy spent almost every weekend over the next three years remodeling the interior. He left the original brick walls, which are still overlaid in places with white plaster, and built three brick arches that separate the kitchen from the dining room, giving the place the look of a Tuscan villa.

Over a glass of wine (the restaurant is BYOB), we take our time studying the menu, which includes entrees like pecan-crusted chicken, pan-seared king salmon, beef tenderloin, and grilled prime rib. I choose the flavorful, broiled scampi, which arrives on a bed of tangy, white-wine rice with a side of steamed zucchini and carrots. Lloyd orders a superb, 12-ounce grilled prime rib with red wine demi-glaze and grilled mushrooms. We share a creamy
bread pudding filled with plump raisins, apricots, and plums steeped in rum. Perfect! When we arrive back at our cabin, Orion is twinkling low in the sky and we pronounce the day a success.

The next morning, we’re up with the birds. One of the two Prairies and Pineywoods Wildlife Trails in the area runs right outside our door, so we go for a hike. The Arrowhead Creek Nature Park trail winds down through grasslands and woodlands to the lake’s shore about half a mile away. Soon, I spot the ever-busy cardinals and mockingbirds, and hear the chirping of what turns out to be a Carolina wren. Along the shore, a great blue heron high-steps
through the shallow water looking for a fish breakfast. While the morning is still young, we drive to the second trail, located in Lake Whitney State Park.  The mile-long loop is a study in competition—wildflowers vie with prickly pear cactus for growing space and cardinals and wrens try out-singing one another in the oak thickets. A scissor-tailed flycatcher lands on a low branch, using its lengthy tail for balance. The trail leads down to a lake inlet, where egrets are feeding along the bank, and then it loops back to the trailhead. We make our way to the nearby campground. On this day it’s too cool for a swim, so I wade along the shore and promise not to wait so long to return.