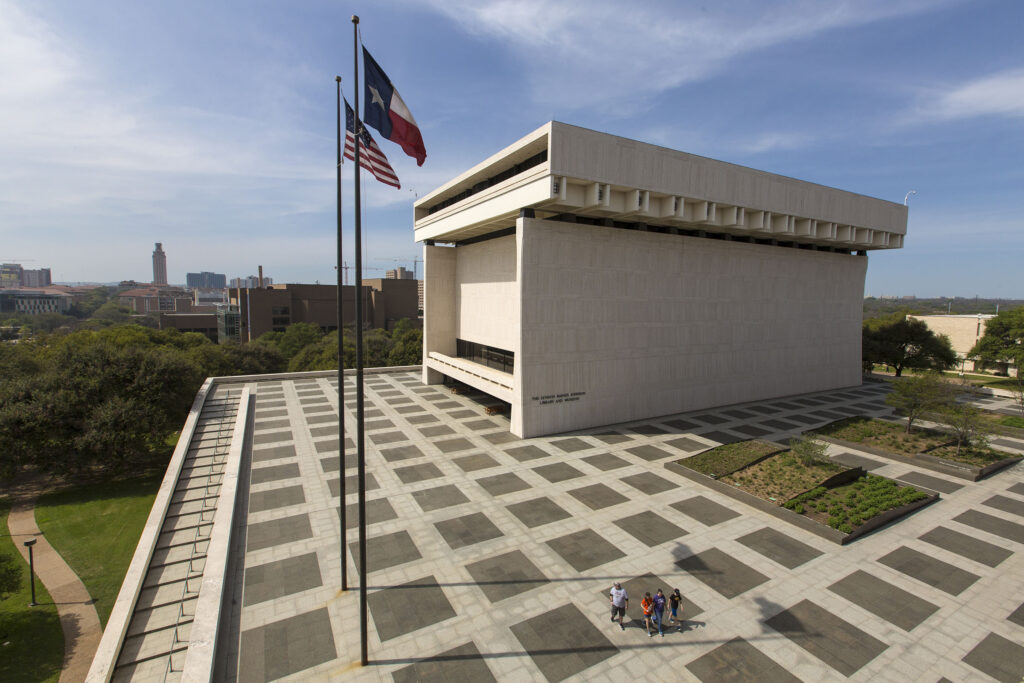 Exterior of the LBJ Library on the University of Texas at Austin campus. Photo courtesy LBJ Library.

The Lone Star State is home to three libraries dedicated to Texans who served as U.S. president: Lyndon B. Johnson, George H. W. Bush, and George W. Bush. Over the years, these libraries have welcomed hundreds of thousands of visitors annually. Attendance figures were rising—in 2019, George Bush Sr.’s library saw its highest attendance ever with 231,496 checking out the venue—before COVID-19 struck.

In March 2020, presidential libraries across the country were forced to close their doors to the public. As part of the National Archives and Records Administration, the libraries follow its policies and guidelines, and during the pandemic that meant the libraries remained closed until adequate safety protocols could be put in place at each location. Starting July 14, the wait is finally over, and all three libraries are opening up again.

It was 50 years ago in May when the first presidential library opened in Texas. At the dedication ceremony for the LBJ Presidential Library, located on the University of Texas at Austin campus, Johnson expressed his desire to have the history of his time in the White House chronicled openly for the public.

“We have papers from my 40 years of public service in one place, for friend and foe to judge, to approve or disapprove,” he said. “I do not know how this period will be regarded in years to come. But that is not the point. This library will show the facts—not just the joy and triumphs, but the sorrow and failures, too.”

Since then, the library has had only six directors, with Mark Lawrence assuming the role in January 2020, right before the pandemic hit. He says the staff took advantage of the library’s closure to focus on digitizing some of the exhibits, education programs, and archives. They also adapted to the times, hosting multiple online events to keep visitors engaged during the pandemic. But the staff is ready to see the public again.

“Excitement has built and built for the day that we would finally be able to open the doors,” Lawrence says. “It’s really exciting that it is so close.”

The library opens with a brand-new exhibit, Lady Bird: Beyond the Wildflowers, celebrating the life and legacy of the the late first lady by guiding visitors through the story of her life with never-before-seen letters, photographs, artifacts, and clothing. The library’s six permanent exhibits are also on display including Civil Rights, November 22, 1963 (which focuses on the transition of power after JFK’s assassination), and the always popular LBJ’s Presidential Limousine. The library is open to limited capacity Wednesday through Sunday and guests must purchase tickets beforehand to reserve a two-hour time slot.

The second presidential library to open in Texas was the George H.W. Bush Presidential Library and Museum. It was opened in 1997 at the Texas A&M University campus, where the Bush School of Government and Public Service was founded. In 2018, the 41st president of the United States was buried next to his wife, Barbara, on the grounds of the museum.

Hail to the Chief

Since reopening on July 1, the library has shown its new exhibit focused on the environmental initiatives of the president. George Bush: An Environmental President highlights initiatives like the Clean Air Act Amendment, the Everglades National Park Expansion Act, the Antarctic Protection Act, and the Oceans Act. Additionally, the museum showcases two other new rotating exhibits, Texas Sea Grant: 50 Years of Science and Stewardship and Oceans of Plastic, which displays art made from plastics found on Texas Gulf Coast beaches.

The libraries’ 32 permanent exhibits are still on display. Here, visitors can see a presidential limousine; a restored 1944 TBM Avenger, which is the aircraft Bush flew as a Navy pilot during World War II; and a restored Studebaker identical to the one Bush had in his early life. The museum is open Monday to Saturday, and visitors must purchase timed entry tickets in advance.

The George W. Bush Presidential Library and Museum was first to reopen on May 25, with something you don’t see very often: an exhibit showcasing artwork by a former president. Out of Many, One: Portraits of America’s Immigrants by George W. Bush. Described by the museum as a “powerful new collection of stories and oil paintings highlighting the inspiring journeys of America’s immigrants and the contributions they make to the life and prosperity of our nation,” the portraits were done by G. W. himself to remind visitors how America has been strengthened by those who come here in search of a better life.

The museum also has its permanent exhibits on display, including a replica of the Oval Office, the bullhorn the 43rd president used to address people at Ground Zero on 9/11, letters he received following the attacks, and a 22-foot piece of steel from the World Trade Center that visitors may touch.

Open all week, the museum requests visitors get tickets here in advance.