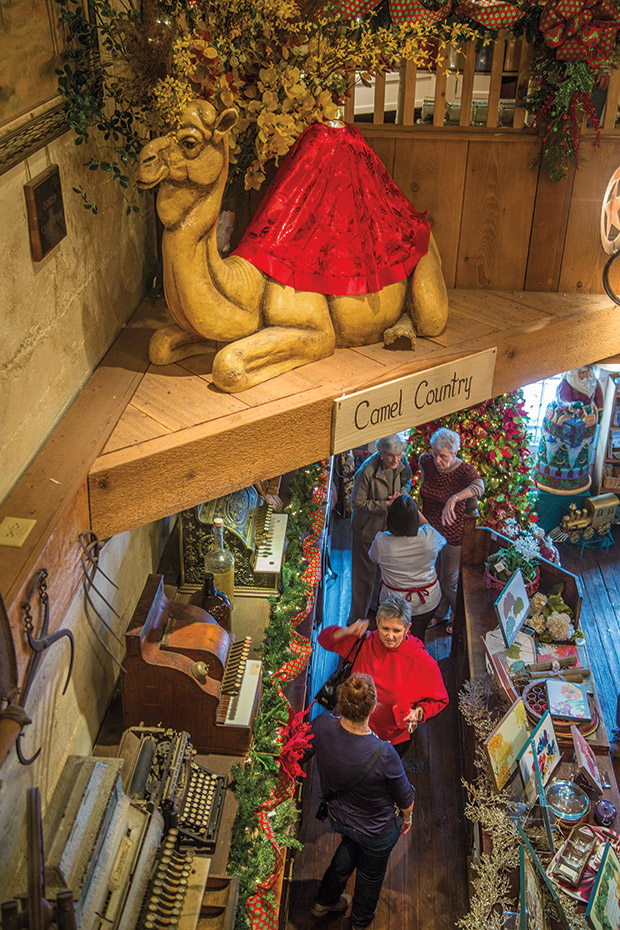 Camels played important supporting roles in the Christmas story, carrying the storied kings and their gifts to the Christ child. Like all travelers, the entourage presumably paused en route to rest and restock supplies.

Centuries later, camels and their handlers found respite at a western outpost in the Hill Country between Bandera and Kerrville, where the Camp Verde General Store and Restaurant carries on that tradition today. And at no time is the store prettier—or busier—than during the holiday season, when visitors from San Antonio, Austin, and beyond come here to shop, eat, stroll the landscaped grounds, and revel in friendships both old and new.

Inside the two-story limestone store’s well-stocked boutique, shoppers searching for holiday gifts take advantage of items including art, jewelry, candles, housewares, and home décor. There’s also an array of jams, jellies, pickles, and other foods, many of them made in Texas. Shoppers not only appreciate the variety of merchandise but also the tasteful displays of holiday decorations; Santa sometimes makes appearances to listen to gift wishes from children of all ages.

Each season brings a new batch of products for a diverse clientele that includes local residents, motorcyclists, and travelers. Now and then, a Hill Country walking club or a cycling group uses the store as an assembly point, enjoying lunch at the restaurant before heading about a mile west to a historical marker explaining the region’s connection with the United States Camel Corps.

For not only did camels play a role in the Nativity, but they also played a role in the founding of the community of Camp Verde and the general store itself. Opened in 1857 as the Williams Community store, the establishment served soldiers from nearby Camp Verde, one of many pre-Civil War posts that protected Western settlers. Here, for roughly a decade beginning in 1856, the U.S. Army tested Secretary of War Jefferson Davis’ theory that camels could provide reliable transportation of supplies to arid West Texas and beyond. Mules and horses suffered without easy access to water, but camels thrived in desert conditions. Soldiers tending to the camels frequented the community store for essentials and other supplies, especially alcohol, since consumption of the latter wasn’t permitted at the camp.

Kerr County historian Joe Herring Jr. says that Bandera Pass, a natural gateway through the rugged hills three miles south of the store, influenced the siting of Camp Verde and the camel experiment. “Bandera Pass was significant because it was part of a strategic route traveled by many peoples—prehistoric, Spanish, Mexican, Texan, modern,” he says.

The first 33 camels from the Middle East arrived at Camp Verde in August 1856. Historians say they outworked horses and mules, but the Civil War and lack of funding after the war ultimately doomed the experiment. Reminders of the camels can be found throughout the grounds in the form of paintings, sculptures, and stained-glass windows. The holidays bring more camel-themed merchandise, such as figurines and crèches that include camels and wise men. Many patrons of the Camp Verde General Store leave with shopping bags bearing the store’s camel logo.

Today’s Camp Verde General Store was built in 1908 after a flood washed away the original structure. Its old-timey atmosphere derives from the creaky wooden floors, pressed-tin ceilings, vintage post boxes with combination locks, smattering of antiques, and shelves of rumpled cowboy hats and well-worn boots donated by local ranchers. The store continues to house a substation of the Center Point post office so families living nearby can collect their mail.

A dining room added in 2012 seats up to 80 people and offers a lunchtime menu of soups, salads, hamburgers, build-your-own sandwiches, and dishes such as meatloaf and grilled pork chops, along with desserts such as a pecan cobbler topped with a scoop of ice cream and crowned with a chocolate camel.

The restaurant’s growing popularity means that reservations are advisable, especially on weekends. If a short wait is necessary, it’s an opportunity to appreciate the airy decor created by abundant floor-to-ceiling windows, rich woodwork, and Hill Country-themed landscape paintings. On days when the weather is pleasant, guests enjoy their food on the tree-shaded patio.

After a satisfying meal, patrons can explore the store’s park-like grounds, stroll a short distance to pastoral Verde Creek to admire the massive cypress trees lining its banks, and learn more about the area’s colorful past thanks to several additional historical markers. They depart with the realization that this serene Hill Country oasis owes its existence to exotic animals from the other side of the world, and to the wise men and women at the Camp Verde General Store who have kept the camels’ memory alive.