A Day in the Roughs

Kayaking the Colorado River near Bastrop 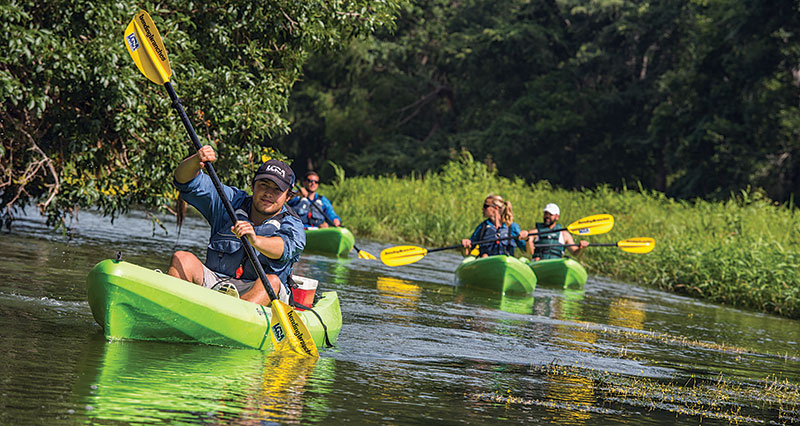 The river rounded a bend and ahead of me, civilization dropped away. A heron soared overhead, Pterodactyl-like, and a few dragonflies hovered around the front of my boat.

I paddled closer to the tree-fringed shore and spied what looked like a pancake-sized rock, which suddenly moved from its perch on a boulder. My brain barely had time to recognize the rock as a turtle before it disappeared.

Readers’ Feedback: See what they have to say

This is why I love to kayak.

This particular jaunt along the Colorado River started about three miles upstream from the Hyatt Lost Pines Resort & Spa, where I had booked the excursion and which served as the take-out point. The kayak and guides were provided by the Lower Colorado River Authority’s McKinney Roughs Nature Park, which lies just east of the resort. This LCRA property covers 1,100 acres containing elements of four separate ecosystems—Post Oak savannah, blackland prairie,
East Texas pineywoods, and Central Texas plateau.

The park’s gray foxes, medium-sized canines, are adept at climbing trees and are active during the day, increasing your odds of seeing one. The wooded landscape also harbors many bird species, including white-eyed vireos, eagles, and osprey along its two-mile Colorado River shoreline.

I had all this wildlife in mind when I met my LCRA guide, Katie Springer, at the Activities Desk in the Hyatt lobby. After making the short drive to McKinney Roughs to pick up the boats and a few other kayakers, we headed upstream to a put-in spot. Soon, with a push of the paddle, we were off into a slight current.

Here and there, boulders rose out of the water, and shoals created broad, bumpy rapids that hurried our boats along without presenting too much of a challenge. The gentle gurgling of those rapids harmonized with birdsong and a breeze rustling through the trees. Every so often, we’d beach our kayaks on an island in the middle of the river, scanning the skies for birds and peering into the clear water for fish. On rocks and logs, dozens of turtles sunned themselves. Many were red-eared sliders, Texas’ most common aquatic turtle, which are named for the red stripe behind their eyes and their habit of sliding off rocks and logs when startled. Katie also pointed out some Texas map turtles, which are found only in the Colorado River system and named for the distinctive patterns on their shells that resemble lines on a road map.

Boulders rose out of the water, and shoals created broad, bumpy rapids that hurried our boats along without presenting too much of a challenge. I watched a pair of red-tailed hawks maneuvering majestically from one tall pecan tree to another, and a colorful kingfisher keeping an eye on the water.

I watched a pair of red-tailed hawks maneuvering majestically from one tall pecan tree to another, and a colorful kingfisher keeping an eye on the water. It seemed like no time at all before we had covered a little more than three miles and reached our take-out point at the Hyatt. I pulled my kayak onto the grass, and took a long, last look at the river before waving goodbye and heading back to my room at the resort. There, a hot shower and a dinner reservation awaited, with the prospect of making s’mores by the fire pit later. All in all, a great adventure day.

McKinney Roughs and Hyatt Lost Pines offer canoe, kayak, and raft trips along the Colorado River year round. Professional guides lead the trips and provide all the equipment, which makes it easy for experts and novices alike to enjoy the experience. If you have an appetite for more, six miles of the Colorado River downstream toward Bastrop comprise a designated Texas Paddling Trail called El Camino Real. Trips, including kayaks and pick-up at the end of the trail, can be arranged with outfitters in Bastrop.

For those who prefer to keep their feet dry, more than 18 miles of hiking and equestrian trails crisscross McKinney Roughs and offer another great way to look for wildlife. The visitor center, a good place to get your bearings before exploring, has a small gift shop and interactive exhibits on resident wildlife and the river.

The park and Hyatt Lost Pines work closely together to offer a variety of outdoor activities to guests. The resort’s offerings include a Challenge Course, an imposing tower connected to various poles, wires, and structures for three levels of progressively daunting activities. There’s also a rock-climbing wall studded with grips of various shapes and colors along one side of the 40-foot high tower, and a zipline from the top of the tower to a platform 250 feet away. The activities calendar also includes treasure hunts, sunset floats, bike rides, and twilight guided hikes.