An Eyeful of Industry

Touring the Houston Ship Channel on the Sam Houston 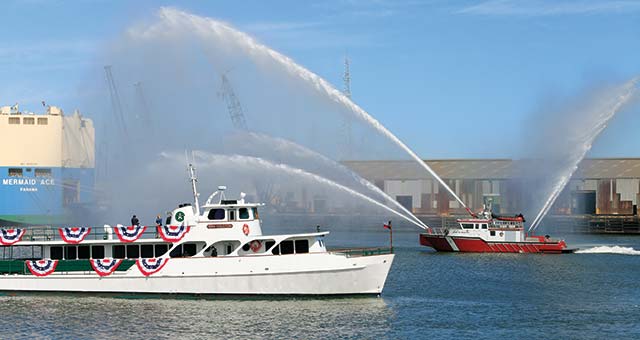 If you’ve ever driven across the Sidney Sherman Bridge in East Houston, you’ve likely taken notice of the incredible sweeping views of the Houston Ship Channel. Located where Interstate 610 crosses the expanded Buffalo Bayou, the 135-foot-tall freeway overpass affords an urban panorama of one of the largest ports in the world.

As a kid growing up in Houston, I never missed a chance to press my face against the car window during the one-minute ride across the Ship Channel bridge. I remember marveling at this wondrous industrial hub and waterborne highway—the impossibly large cargo ships offloading cars like rows of ants, the city of metallic oil refinery towers glistening in the distance.

What I didn’t know at the time was that the Port of Houston Authority offers free boat tours to give the public a close-up view of the ship channel and its inner workings. With no qualms about being a tourist in my hometown, my wife and I joined one of the tours on a sunny October afternoon. We congregated with a dozen or so other tourists and schoolchildren on the forward deck of the M/V Sam Houston II, which docks at the Port of Houston, about five miles east of downtown Houston. As a Texas flag fluttered from a pole attached to the boat’s bow, we shoved off into the heart of the ship channel, a 52-mile-long, 530-foot-wide waterway that connects the port to Galveston Bay.

The 90-minute, round-trip tour takes visitors along a seven-mile stretch of the channel, from the Turning Basin Terminal to the Washburn Tunnel. Each tour is different, depending on the ships and cargo coming and going from all parts of the world. Narrating over the loudspeaker, Capt. Doug Mims points out vessels flying flags from countries around the globe, including Singapore, Norway, and Greece.

Christened in 1958, the 100-passenger Sam Houston—with its stark white hull and polished wood trim—has been hosting visitors for nearly 60 years. Measuring 95 feet long and 24 feet wide, the upper and lower decks offer impressive standing-room views of Houston’s marine port at work. The views are nearly as fantastic from the seating in the air-conditioned cabin at the center of the boat, where complimentary coffee and soft drinks are served.

Capt. Mims shares interesting tidbits as the diesel-powered ship cruises along the channel at a leisurely pace. We learn about the port’s storage tanks, holding liquids like corn syrup and blackstrap molasses for cattle feed. Mims points out an industrial recycling facility capable of engulfing entire cars, and even airplanes. As we pass various oil facilities, he notes that the port’s largest petroleum refiner is ExxonMobil’s Baytown Refinery, which has a capacity of nearly 600,000 barrels a day. Tugboats honk hello; crane operators and deck hands on international cargo ships gesture a friendly wave or nod.

We motor slowly past colossal oil tankers as they navigate up the channel to the various wharves and terminals along the port. Enormous RO-RO ships, short for “roll-on/roll-off,” unload vehicles from their bowels. The sheer scope of these vessels is staggering; they can carry more than 6,000 cars and trucks.

With Houston’s downtown skyline just visible in the distance, we circle around to head back. The captain points out a solitary historical marker amid a group of trees on a park-like grassy bank, noting the location where Texan fighters captured Mexican General Antonio López de Santa Anna following the Battle of San Jacinto.

Four months after that decisive battle of April 1836, land speculators and brothers Augustus and John Allen landed at the confluence of White Oak and Buffalo bayous with the dream of building a city. Where others may have seen merely a muddy meandering creek, the Allen brothers saw an important navigable waterway with direct passage to Galveston Bay. Buffalo Bayou would allow cargo to be offloaded from ships in Galveston and then transported by barge and shallow-draft steamers directly to Main Street in downtown Houston. Exports like cotton, rice, and lumber left the same way.

In the decades that followed, Houston’s growth called for widening and deepening the bayou. The catastrophic Galveston hurricane of 1900 and the discovery of oil at Spindletop in 1901 reinforced the argument for a protected regional port. Eventually, local business leaders and U.S. Congressman Tom Ball convinced the federal government to help fund the dredging and widening of Buffalo Bayou into a significant deep-water channel, and the Houston Ship Channel opened in 1914. Today, the Port of Houston—which commemorated its centennial with a series of events in 2014—leads the nation in foreign waterborne tonnage, houses the nation’s largest petrochemical complex, and accounts for $179 billion in economic impact in Texas.

As the Sam Houston carries us under the Sidney Sherman Bridge, I gaze up in amazement. I’m now, if only for a time, a cog in the panorama I marveld at from afar as a child. With a newfound perspective of the Houston Ship Channel’s history and operations. I’m equally amazed by the spectacle today.