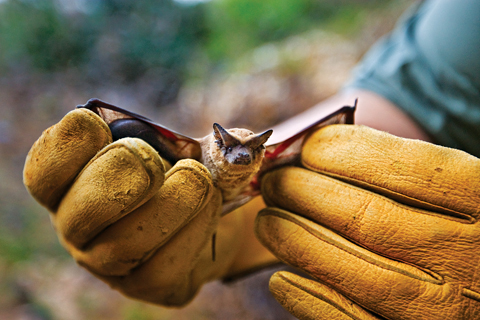 Despite the increased awareness of bats’ importance, Dr. Merlin Tuttle says American bats are in jeopardy. “We’re currently losing a large portion of them because of wind turbines and White-nose Syndrome,” he explains. “We’re collaborating with the American Wind Energy Association to find answers to the first problem. Preliminary research has shown that shutting off the turbines during periods of low wind results in 70 percent less bat mortality with less than a 1 percent loss in energy production. With further research, we hope to save more bats at even less cost. “

Tuttle says White-nose Syndrome (WNS), which already has killed more than a million bats in the northeastern United States, is potentially a much greater problem. Named for a white fungus found on the noses of affected bats, the disease has killed 95 to 100 percent of the hibernating bat populations it has infected, and it is spreading rapidly, covering nine states in just three winters. While the Mexican free-tailed bat, the most conspicuous bat species found in Texas, doesn’t hibernate, Tuttle says it’s not clear which bat species are at risk. “Without major research to identify potential causes and solutions, we’re facing a devastating situation,” he adds. “Some of America’s most abundant species could become endangered or even extinct.”