From Dusk Til Dawn 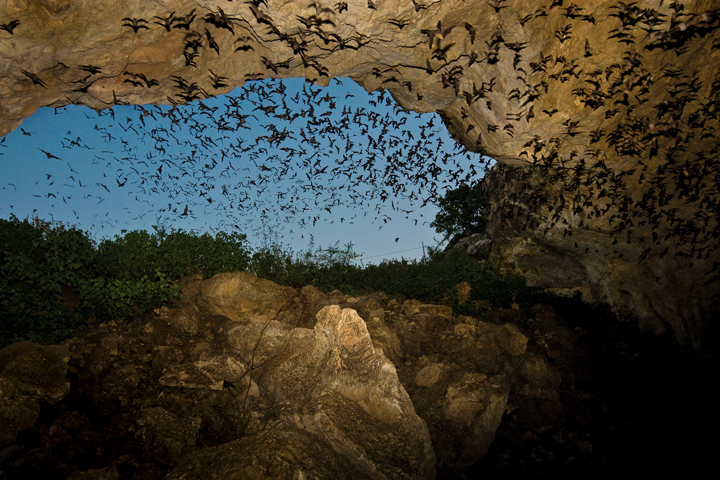 Frio Bat Cave, managed by Hill Country Adventures, hosts the second-largest bat population in the world, as well as hundreds of tourists March through September. (Photo by Larry Ditto)

Holy Bat-mania! The interest in bats has soared in recent years, unrelated to the antics of the latest Caped Crusader. Bat-lovers gather before sunset at sites across the state to watch swarms of these mysterious creatures begin their nightly exodus. In the Capital City, bats inspired a massive, kinetic sculpture with a 20-foot wingspan that stands near the Ann Richards Congress Avenue Bridge, where a multitude of real-life bats hang out during the day. The city’s unofficial mascot has permeated popular culture so much that there’s even a festival in its honor each August, a peak time for bat-viewing in Texas.

“It’s hard to even imagine what Texas would be like without bats.” – Dr. Merlin Tuttle

Why all the fuss about these small, furry creatures? Part of the answer probably lies in ats’ reclusive nature, which piques our curiosity. But scientists have also discovered that these flying mammals are highly beneficial to humans, and the word is getting out. Bats eat mosquitoes, tons of them. And they devour an even greater number of insects that attack crops—pests like corn earworm and army-worm moth, whose respective diets include dozens of vegetables, as well as forage plants and cotton. According to Dr. Merlin Tuttle, who founded the Austin-based Bat Conservation International, bats’ voracious appetite for harmful insects results in their most important contribution. “Bats greatly reduce our reliance on pesticides,” he says. Bats also pollinate or disperse seeds for hundreds of plants, such as dates, figs, and agaves.

Setting aside the benefits to agriculture, bats eat vast numbers of night-flying insects (just as birds eat vast numbers of insects that fly during the day), helping keep nature in balance. “It’s hard to even imagine what Texas would be like without bats,” says Tuttle. “Just one species, the Mexican free-tailed bat, eats hundreds of tons of insects a night.”

Texas boasts 32 species of bats—more than any other state—as well as the site of the world’s largest bat population. Owned by BCI, Bracken Cave, near San Antonio, is home to more than 20 million Mexican free-tailed bats. While the site is off-limits to the general public, BCI hosts frequent viewing nights for its members during the summer, with basic membership starting at $35 a year. Humans haven’t always appreciated the advantages of having bats around. Tuttle says when he founded BCI in 1982, polls showed that bats were among the world’s least-popular animals. “They ranked right between rattlesnakes and cockroaches,” he says. “People associated bats with rabies, and they were terrified of them.”

Thanks to educational efforts by BCI and other organizations, this perception is changing. “People are beginning to get the message that as long as you leave bats alone, there’s little to fear,” says Tuttle. “For example, thousands of people come into close contact with bats at Austin’s Congress Avenue Bridge each summer, and in more than 25 years, no one has been harmed.”

Some state organizations have begun playing a role in bat conservation. Starting in 1996, the Texas Department of Transportation has designed bridges with bat habitat in mind, often including features conducive to roosting at no extra cost. The policy results in attracting millions of bats to agricultural areas. Key natural roosts, such as Bracken Cave, have also been protected, thanks to the efforts of Texas Parks and Wildlife Department, Nature Conservancy of Texas, and BCI. Best of all, there are now a number of sites where you can witness one of nature’s most spectacular phenomena: the mass emergence of a bat colony as it begins its nightly foray. If you’ve never had this experience, plan to remedy that soon. The show starts at dusk, at a bat hangout near you.