By Lake and by Land 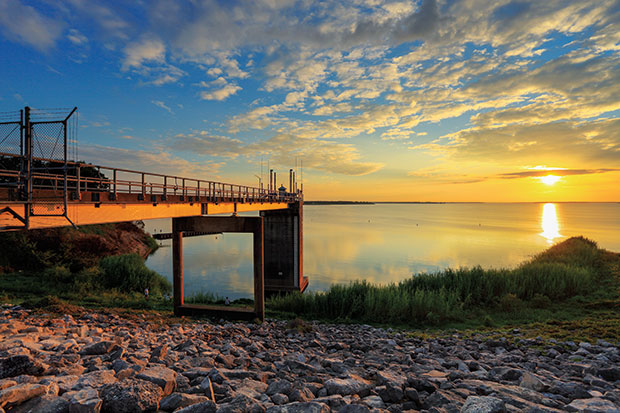 On a late spring day in a quiet corner in south-central Texas, wispy clouds saunter across a stark blue sky over Lake Somerville.

For information on Somerville, including lodging and events, call the Burleson County Chamber of Commerce’s Somerville office at 979/596-2383.

The whisper of a light breeze blends with the percussive cadence of water lapping the hull of our aluminum canoe as we glide effortlessly along the surface of the dark emerald water. To my wife Beth and me, paddling in this aquatic respite, the hubbub of city life seems a world away.

Yet, only 35 miles from Bryan/College Station and 95 miles from Houston and Austin, Lake Somerville beckons everyone from families for weekend camping to serious anglers for the spring spawning run of white bass. Unlike many Texas reservoirs, Lake Somerville, a U.S. Army Corps of Engineers flood-control lake, is bordered completely by government land, parks, and campgrounds. That means that the lake’s 11,460 surface acres and 85 miles of shoreline are unspoiled by homes and other development.

Flanking the lake’s westernmost edge, Lake Somerville State Park and Trailway is the lake’s biggest attraction and the focal point for our weekend of relaxation and exploration. The 8,700-acre state park complex actually consists of three sections—the Nails Creek Unit, the Birch Creek Unit, and the 13-mile Lake Somerville Trailway connecting the two—as well as a public hunting area.

After launching our rental canoe from the Nails Creek unit, we paddle leisurely against a light breeze. We route around a large peninsula to a cove on the eastern edge of the park. Hugging the shoreline to our right, exposed roots and live oaks cling precariously to crumbling limestone bluffs above us. On our left, a handful of other boaters ply the sparkling waters, and dense woods border the opposite shoreline. Our conversation slows to a minimum, and we break the tranquility only to point out an egret rookery on an island in the distance.

Rounding the top of the peninsula, the western shoreline creates a welcomed wind block. The waters become calm and glassy as we paddle close to foraging white egrets, little blue herons, and white-faced ibis. During the winter, you can find flocks of wintering sandhill cranes in this same cove (across from the Bent Tree Camping Area), as we discovered on a previous trip. It’s easy to see why birding is a special draw for the park.

Paddling the lake is just one of many ways to experience Lake Somerville. With more than 37 miles of mixed-use trails crisscrossing the state park, it’s a year-round destination for horseback riders, hikers, and mountain bikers.

A particular favorite among trail enthusiasts is the Lake Somerville Trailway, which encompasses more than 5,000 acres of park land. Along with the main path between the two units, offshoot trails include a riparian spur up Yegua Creek and a loop around a 350-acre wetland area called Flag Pond.

With a laid-back jaunt up the trailway in mind, we dock our canoe and set our sights on making it to the Flag Pond and back, an eight-mile round-trip hike. We traverse level to gently rolling terrain through a mix of shady hardwood thickets, creek bottomland, wetlands, and prairies of little bluestem, which during springtime are blanketed in a colorful medley of bluebonnets, Indian paintbrush, primroses, phlox, and wine cups.

The lake’s 11,460 surface acres and 85 miles of shoreline are particularly unspoiled by homes and other development.

As we make our way up the meandering path, sunlight filters through the arboreal canopy overhead. Spanish moss sways in the breeze, draped from boughs of post oak, water oak, and hickory trees. At times, mustang grape vines and dense stands of yaupon holly cocoon around the trail, like an arched awning. Colorful striped lizards called six-lined racerunners periodically dart in short bursts across the sandy trail ahead of us. We also glimpse white-tailed deer, rabbits, and armadillos.

Near the four-mile mark, we marvel at the scenic view, courtesy of a high ridge overlooking Flag Pond and the Yegua Creek flood plain. From this vantage point, we see all manner of waterfowl in the distance, including white pelicans, grebes, cormorants, and a variety of ducks. In the colder months, keep a keen eye out for wintering bald eagles and migrating osprey.

To make a weekend of it, you could break the 13-mile trailway into segments; primitive campsites are available along the way. Lakefront and wooded tent and RV campsites are also available in the park, as well as equestrian sites. For those who prefer more refined accommodations, lodging in the area includes several marina campgrounds with lakeside cabins, as well as bed and breakfast options near the lake.

Having had our fill of hiking for the moment, we decide to explore the nearby town that shares the lake’s name. Just a stone’s throw from the water’s edge, the sleepy, one-stoplight hamlet of Somerville (population 1,370) sits along Texas 36 between Caldwell and Brenham. On the unassuming main drag, Victorian-style street lamps and ornate brick-and-mortar storefronts retain their early 1900s charm.

Like many Texas towns, Somerville owes its existence to the railroad boom of the late 19th Century. The town is named for Albert Somerville, first president of the Gulf, Colorado, and Santa Fe Railway Company. With key rail lines converging in Somerville, GCSF made Somerville a division headquarters with a switching yard, a round-house, machine shops, and a cross-tie treating plant.

Today, life in Somerville runs at a snail’s pace and downtown slumbers along quietly. Yet, the frequent rumble of trains coming and going from BNSF Railway’s 10-track switching yard and the endless stacks of railroad ties at the local plant (now owned by Koppers Inc.) remind us that the railroad industry is still very much alive in Somerville.

Arriving in town, we stroll along the sidewalk of Texas 36, the town’s main street. We discover a handful of shops including Grassroots Junction, which serves coffee and desserts amid antiques and collectibles for sale; Art C’s, an art studio and gallery that holds workshops and displays the artwork of local and emerging Texas artists; and the Whistle Stop, with its eclectic mix of antiques and vintage collectibles, like cast-iron décor.

Across the street is the Somerville Area Museum, which occupies a rehabbed mercantile store and opens by appointment (call the phone number on the front door and someone will meet you within about 15 minutes). Stepping inside the museum, we find a 1,500-square-foot treasure trove of antique furniture, pioneer farming implements, vintage military gear, and railroad artifacts. 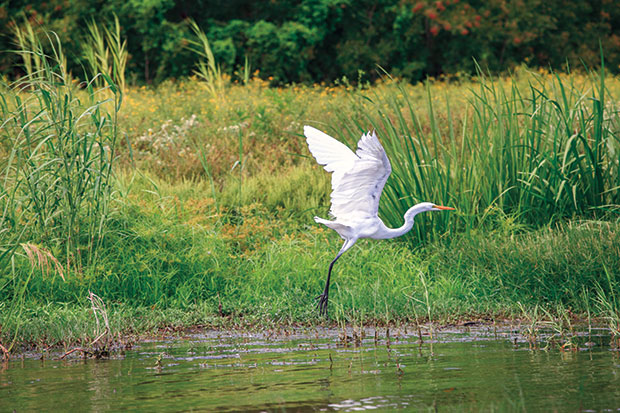 Somerville’s railroad heyday comes to life as we peruse pictorial displays of the old rail yard; glass cases of train memorabilia and equipment such as a telegraph machine, a conductor’s chair, and a Harvey House uniform; and books on the history of the local community and railroads. The museum also houses curiosities like a 1920s permanent-wave machine, a woolly mammoth’s tooth, and a Victorian-era cooling and embalming table donated by the Woods Funeral Home. Outside behind the museum, an old Somerville Tribune printing press, the town’s first press, is rusting peacefully, as is the town’s old calaboose (a two-cell concrete jail).

Next door to the museum, Heritage Square provides an area for railroad buffs to enjoy shady tree-covered benches and a front-row view as locomotives and freight cars roar by across the street.

Having whiled away the afternoon, we set our sights on dinner. Somerville has a handful of restaurants, including Mantey Country with a meat market and buffet; Neinast “The Windmill” Restaurant offering breakfast all day, steaks, and Mexican food; Mama’s Kitchen, with home-style cooking for breakfast, lunch, and dinner; and Texas Seafood and Steak House, with Cajun-influenced platters.

Driving away from the main drag, we spy Las Fuentes Mexican Restaurant. Its large neon sign draws us in. After filling up on chips and salsa and beef tacos al carbon, we head out to catch the sunset at nearby Lake Somerville dam, just south of town.

Driving across the two-lane backbone of the dam, we pull into a parking area just above the Yegua Creek stilling basin. We walk past the dam intake tower and find a spot on the riprap with a panoramic view of the lake just in time to see the sun paint the sky in pinks and purples. Peering out over the lake we had paddled earlier, we see the sun’s last colorful burst shimmer across the water and then melt away. It’s a picture-perfect way to end a great weekend.