Satisfy Your Sweet Tooth in Hico 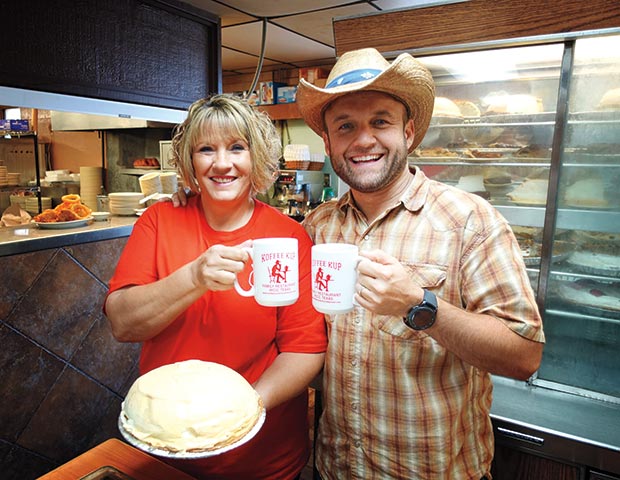 This little town southwest of the Metroplex may be small but it’s not lacking when it comes to Texas-size tripping. Hico’s history is mysterious, its desserts are mouthwatering, and its silo-climbing is intense.

9:00 a.m. To start my day, I moseyed on down to The Chop House, a restaurant set in a former meat locker in the Midland Hotel, which has been housing travelers since 1896. The
heavenly aroma of fresh-baked cinnamon rolls wafted over me, and I knew what I would sample first. I followed the warm, gooey cinnamon rolls with some eggs and bacon, and I was ready to roll.

10 a.m. I wandered along the downtown streets and felt like I’d stepped onto the set of a Western as I passed the historic buildings, many of which still show the remnants of colorful old murals. I shopped at the fashionable Blue Star Trading boutique and then “popped” into Hico Popcorn Works. Corny jokes aside, this little store exploded with a handful of sweet and savory flavors. The spicy jalapeño topped my list, with cinnamon toast coming in a close second.

11:30 a.m. As I continued down the street, I found the Billy the Kid Museum, retelling Hico’s claim to fame as the final home of the famous outlaw. I learned the controversial story of how Billy may not have died in New Mexico in 1881 but instead lived to old age in Hico under the name William “Brushy Bill” Roberts. I left the museum as convinced as some Hico locals, who would seemingly bet the family farm on Brushy Bill’s story.

1:00 p.m. What couldn’t be disputed was the rumbling in my tummy, so I quickly made my way to the Upstairs Inn to grab lunch downstairs at Eis. Named for the German word for “ice cream,” this place offers a selection of scoops, but the real star was the jalapeño pimento cheese sandwich made with wild tomato jam. The German word that came to mind was gut because it hit the spot real good.

2:00 p.m. After lunch I headed straight to Wiseman House Chocolates. Inside this small historic home, I found a selection of chocolates that would make Willy Wonka jealous. Handmade sweets, including more than a dozen kinds of chocolate truffles, filled the shelves. I started to chew a sample and was told to simply let it melt in my mouth. It took me to chocolate heaven, reminding me that we all need to slow down and taste the chocolate.

3:30 p.m. Full of energy (and probably too much chocolate), I found Siloville, the perfect place to burn off the sugar. The unconventional climbing facility features grips on the inside and outside of two 66-foot grain silos. The climb was challenging, but the killer view of Hico from the top made it all worth it. Next, I was on to Siloville’s Ninja Warrior Course, where I learned that I’m not exactly a ninja, or even a TV ninja. Regardless, I had a blast hopping, leaping, and swinging over the exacting wooden obstacles.

6:00 p.m. For dinner, I selected the iconic Koffee Kup Family Restaurant, a Hico diner that’s been serving up classic country fare in its current location since 1965. I scarfed down its signature chicken-fried steak as I chatted with the locals sitting next to me. And to polish it all off, I grabbed a slice of Doctor’s Office pie, with sweet cream cheese and vanilla custard atop a graham-cracker crust. What a sweet trip! Any day that involves handmade chocolate truffles, outlaws, ninjas, and homemade pie is always a good one. And you’ll find all this and more in the little town of Hico. So whether you follow my footsteps or forge your own path, I hope to see you on the road.