For some, the idea of spending time in Huntsville conjures up images of a striped jumpsuit, two matching metal bracelets, and a uniformed escort who definitely isn’t a tour guide. But for those who visit voluntarily, Huntsville makes for one incredible day trip. 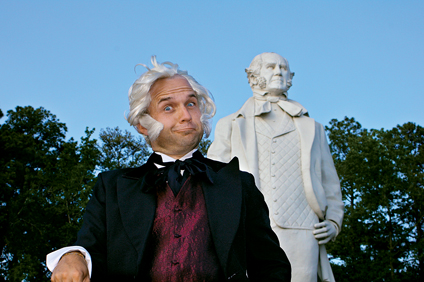 9:00 a.m.  I started my day with a visit to Huntsville’s most famous and most enormous resident—the 77-foot-tall General Sam Houston Statue. This iron-and-concrete tribute welcomes travelers along I-45 to Sam’s neck of the Piney Woods. Rather than pass by, I spent some time gazing up from Sam’s colossal feet, which is the only way to truly appreciate the giant general.

10:00 a.m.  To dig deeper into Houston’s legacy, I visited the Sam Houston Memorial Museum at Sam Houston State University. Most know Sam for his victory at San Jacinto, but few know about his other accolades. The museum recounts the many chapters of Houston’s life, such as his time living with the Cherokee, his short tenure as Tennessee’s governor, and his firm pro-Union stance before the Civil War, which ultimately resulted in his political downfall. The museum is full of artifacts, but none more incredible than the Woodland Home where Sam lived with his wife, Margaret, and seven of their eight children. The home is a National Landmark and still stands in its original location (now behind the museum).

11:45 a.m.  To pay my respects, I stopped by Houston’s Grave at the Oakwood Cemetery. When Houston died, few mourned his death, and his grave was marked with a common tombstone. Over time, the peo-ple of Texas erected the ornate marble headstone Sam deserves, and Andrew Jackson’s quote on its front couldn’t ring more true: “The World Will Take Care of Houston’s Fame.”

12:15 p.m.  With a full head and an empty stomach, I headed to Mr. Hamburger. Opened in 1959, this place is still a popular stop for hungry locals and SHSU students. My “Warden Burger” was deliciously topped with onions, mushrooms, and a red pepper/garlic sauce. It satisfied my hunger and set the stage for my next activity.

1:30 p.m.  Since 1848, Huntsville has been home to the Texas prison system and is the location of the state’s first facility—the Huntsville “Walls” Unit. Just blocks from downtown, the Walls Unit continues to operate and houses around 1,700 inmates. I drove around the unit’s towering brick walls, happy to be outside the Walls Unit.

2:00 p.m.  To get a glimpse of what goes on inside the Walls and other prisons, I stopped by the Texas Prison Museum. Along with displays documenting the history of the Texas prison system and in-credible stories from inmates and employees, the museum houses unique artifacts like confiscated weapons and “Old Sparky,” the electric chair used from 1924-1964.

4:30 p.m.  To celebrate my freedom, I drove to Huntsville State Park. In warmer weather, the park’s Lake Raven is an excellent swimming hole, but with a chill in the air I opted to hike across a series of boardwalks to a tributary of the lake known as Alligator Branch. The gators were nowhere to be seen, but a hike along the beautiful pine-lined park trails was payoff enough.

6:30 p.m.  For dinner, I made my way to The Homestead on 19th, part of which is in an 1830s log cabin on Houston’s old homestead. My mozzarella-stuffed steak and homemade shortcake made for one of the most delicious meals I’ve ever eaten. And while it wasn’t my last meal on earth, should I find myself in such a situation, I now know what I’m ordering.

While Huntsville certainly lives up to its “captivating” reputation, it makes a much better day trip for those who visit of their own free will. And if Sam Houston liked Huntsville enough to call it home, then every Texan should follow the General’s lead, at least for a day. So whether you follow my footsteps or forge your own path, I hope to see you on the road.

Chet Garner is  the host of The Daytripper travel show on PBS.