From H-E-B to Self-Service: How Arnosky Family Farms Pivoted their Flower Business

After COVID-19 threatened their Blanco business, owners innovated to survive 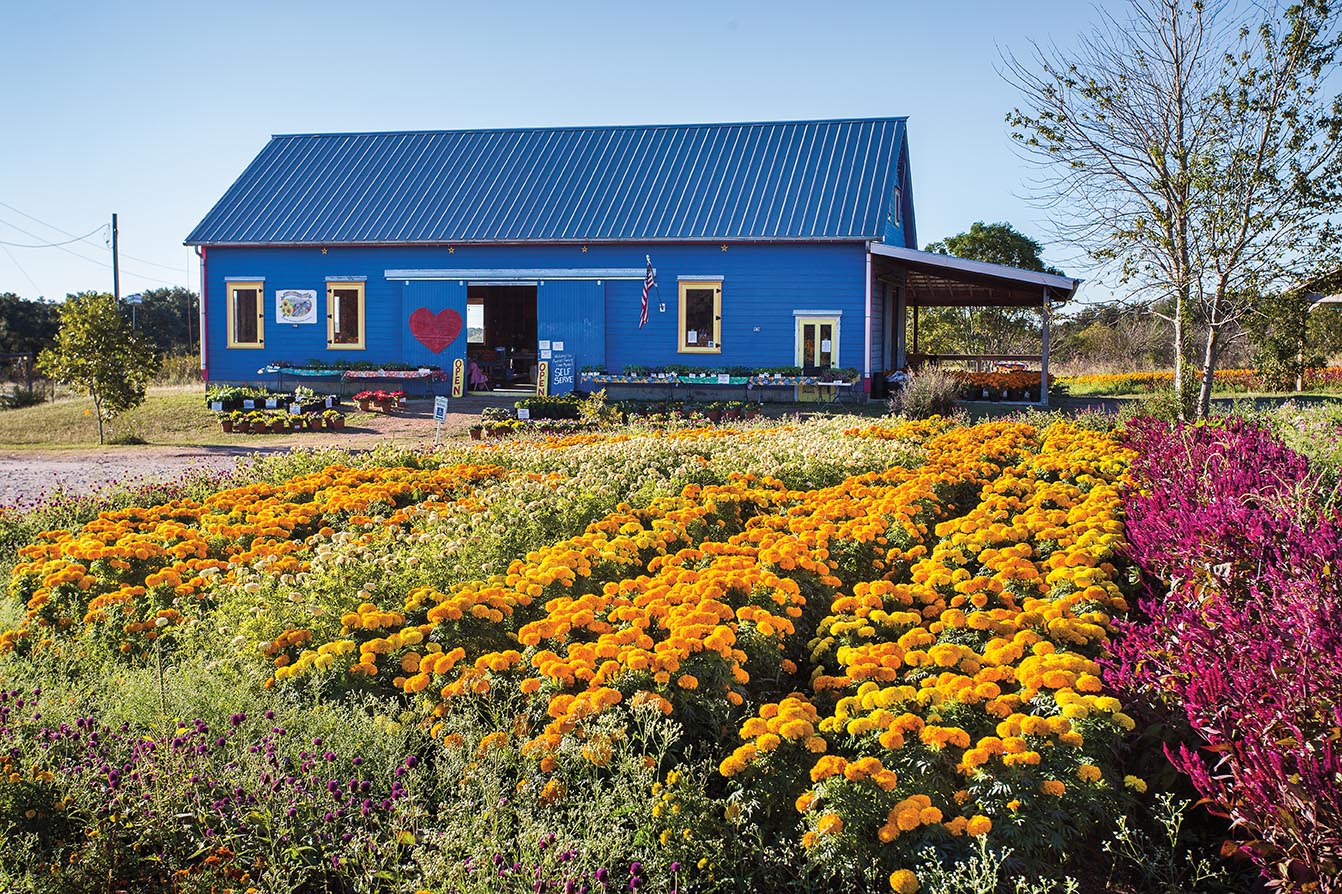 Flowers grow in the field in front of the Blue Barn at Arnosky Family Farms in Blanco.

When COVID-19 slammed into the U.S. last March, nearly 30,000 Dutch irises were about to bloom on Frank and Pamela Arnosky’s farm in the Hill Country town of Blanco. They were destined for H-E-B floral departments around the state. But just before harvest, the Arnoskys received a call. Due to an inundation of panicked shoppers at the beginning of the pandemic, H-E-B was temporarily closing certain specialty departments, floral among them, in order to dedicate its resources to stocking staples.

Staring down a major financial loss at the beginning of a year that was shaping up to be more unpredictable than even farmers were prepared for, the Arnoskys made a big decision.

“We put all these irises out in our Blue Barn, buckets and buckets of them, and we said, ‘They’re buy one, get one free,’” Frank says. During normal times, the Blue Barn Farm Market is the community hub of the Arnoskys’ flower operation, open to visitors throughout the week, with a farmers market on weekends. But as COVID-19 escalated and the irises bloomed, the Arnoskys turned it into a full-time, self-serve market with honor-system payment.

It was a hit. In just three weeks, all of the irises were gone, the Arnoskys broke even, and there was a crop of newly quarantined Texans with smiles on their faces and fresh-cut flowers on their tables. A few weeks later, the H-E-B floral department resumed its regular activity.

Other flower farmers around the state shared similar experiences. Business looked precarious with several big-box stores initially scaling back their floral orders, and the cancellation of events ranging from farmers markets to weddings, due to stay-at-home orders. But as the pandemic became the new normal, Texans not only began to buy flowers at record levels, they also prioritized buying local. “The pandemic really did not hurt my business at all,” says Rita Anders, owner of Cuts of Color in Weimar. “I think the pandemic actually made people enjoy their homes, and they wanted flowers more than ever.”

The Arnoskys were still recovering from several years of business losses at the start of 2020, which had caused them to put their Blanco farm on the market for a short time and to think about retiring. But in a strange twist, COVID-19 proved to be an unexpected boon for flower sales. The couple ended 2020 with renewed excitement and big plans for the future of their nearly 30-year-old family business.

On a warm Sunday in mid-October, Frank and Pamela were in the Blue Barn, greeting masked guests and offering kids the chance to pick a pumpkin from the nearby flower beds. It was the height of marigold season, and monarch butterflies fluttered through the colorful blooms outside. Inside, the Arnoskys were strip-ping leaves from the lower stems of what would eventually be 20,000 bunches of marigolds, banding the bundles together, and dropping them into buckets of flower food. Within 48 hours, the sea of marigolds surrounding them would be at H-E-Bs around the state to accommodate the demand sparked by Día de los Muertos and Diwali celebrations.

The Arnoskys met at Texas A&M University when Pamela was an undergraduate and Frank was a graduate student, but their romance blossomed several years later during a series of serendipitous meetings that culminated in back-to-back weekends dancing to the Texas polka band Brave Combo. Thirty-one years later on a balmy Hill Country day, Frank sports the same bushy beard and Pamela the same trademark long braids they did on their wedding day.

Because of Frank’s education in and passion for horticulture, the pair always felt farming was their destiny, but it took a few years and a little trial and error to realize that cut flowers had big potential. 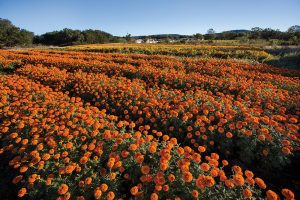 In 1992, on the 12 acres of land they had recently acquired in Blanco, the Arnoskys planted their first crop of snapdragons and statice. Two years later, they secured their inaugural client, Central Market, a grocery store owned by H-E-B. This proved to be a fortuitous partnership. Well before buying local became popular, the upscale chain debuted with an emphasis on offering specialty products right as the Arnoskys were attempting to innovate the way flowers were promoted by labeling their bouquets as “Fresh from the Texas Hill Country.”

“When we started in 1993, there was nobody who was marketing local flowers,” Frank says. “In fact, most flowers didn’t even have a brand on them; they just had a plain plastic sleeve. So, we were one of the first people in the country to put our name on a sleeve to identify where the flowers come from.

Today, the Arnoskys farm during all four seasons on 20 of their 88 acres in Blanco. They also cultivate 16 acres in Minnesota for late-season peonies and 7 1/2 acres in Fort Davis for early-season peonies. From the 30,000 seedlings they plant in the ground each week during growing season, they produce 2,500 mixed bouquets and another 2,000 single-flower bunches a week. Everything they grow is sold in Texas—under their Texas Specialty Cut Flowers brand—through Central Market and H-E-B, or in the Blue Barn.

“The thing that we never thought about when we started is, I thought we were just going to be some kind of little subsistence farm,” Pamela says. “But flowers bring people together and open doors, so we have met some amazing people.”

In 1995, they began a friendship with Lady Bird Johnson after cold-calling the LBJ Library to see if they could deliver some experimental long-stemmed blue-bonnets to the former first lady. And in 2001, they were invited to one of George W. Bush’s presidential inaugural balls, an opportunity secured because of the flowers they provided to the Governor’s Mansion in Austin while Bush was in residence.

Though farming is their passion, they are just as committed to preserving and uplifting their community in Blanco. One of the groups that has recently made use of the Blue Barn is the movement against the Permian Highway Pipeline. The pipeline project is routed just over a mile outside of downtown Blanco, a small town that is finally starting to recover from the devastating Hill Country floods of 2015.

“The thing that we never thought about when we started is, I thought we were just going to be some kind of little subsistence farm. But flowers bring people together and open doors, so we have met some amazing people.”

“We were all just on the idea that Blanco is really hitting its stride as a rural destination,” Frank says. “The momentum was there and then all of a sudden, you get told there’s a pipeline going through town. It’s kind of a death punch.”

Ultimately, the opposition effort failed, partially due to the momentum drain of COVID-19. And while the couple remains concerned for the pipeline’s impact on the area, Pamela says, “We won’t notice the pipeline as much once it rains—and if they plant wildflowers on it.”

A more pressing issue is securing their legacy. The Arnoskys face the same dilemma as many farmers today, whose average age is now 58 years old: So far, none of their four children have expressed a desire to permanently take over the business. Without a clear succession plan, the Arnoskys are trying to find a way to preserve their valuable piece of undeveloped Hill Country land as San Antonio and Austin slowly converge on the area.

“This farm has to pass to the next generation, some kind of a way,” Pamela says. “The land was here before we were; it’s going to be here after. It ought to be our bounden duty to not turn it into a subdivision. It needs to be kept in green space.”