Along the Medina River, the farmstead spans Texas history

Written by Art Williams, Photographs by E. Dan Klepper | From the January 2019 issue | Updated: December 21, 2018 | Filed Under: Family TravelThings to Do 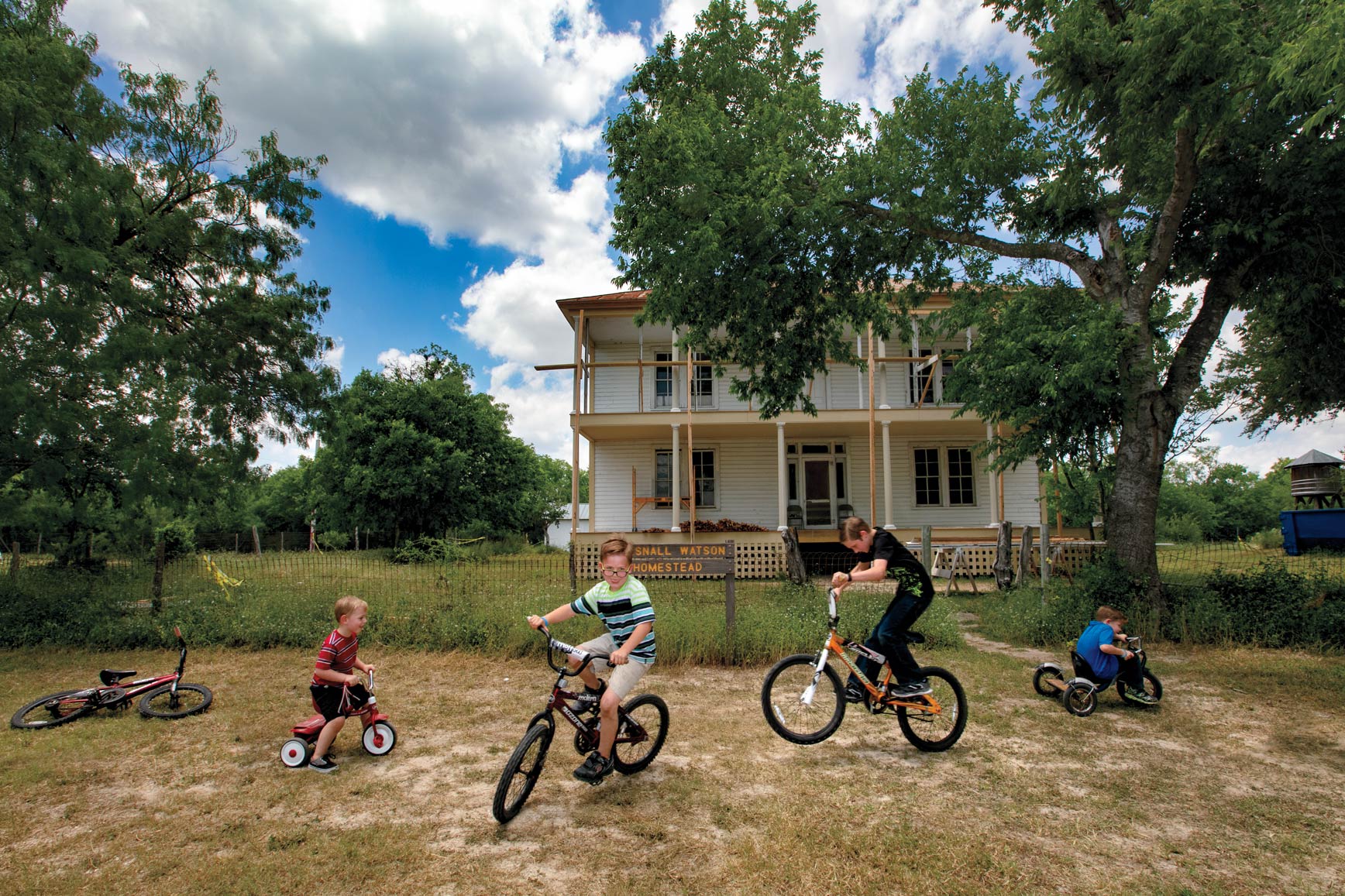 The Presnall-Watson Homestead opens to the public monthly for hiking, biking, trail riding, and more.

A seemingly incongruous site greets Saturday afternoon visitors at the Presnall-Watson Homestead, a rambling 19th-century farmhouse along the Medina River in south San Antonio. Kids on bicycles kick out tricks as horseback riders in cowboy regalia round the corner, creating a surprising mash-up of three centuries crammed into one.

In the 1990s, San  Antonio abandoned plans to build a reservoir on the site, allowing for the eventual creation of a preserve.

Time warps are not all that unusual for the Presnall-Watson Homestead, which is the centerpiece of a 1,200-acre preserve managed by the nonprofit Land Heritage Institute. With its 1850s farm site, the homestead represents a well-preserved example of Texas frontier life. But a deeper exploration reveals this territory’s connection to a wide swath of Lone Star history—from prehistory to statehood. And on the second Saturday of each month, the preserve opens to give history buffs, mountain bikers, hikers, equestrians, and nature enthusiasts an opportunity to converge and explore.

Open to the public on the second Saturday of each month, or by appointment for groups.
Entry costs $3 per person, $10 per family; equestrian fees are $10 per horse and rider.

“The property is where people from many cultures found the natural resources to live and prosper—the water of the Medina River, fertile soil, and plentiful game, as well as timber and stones for building,” says Peggy Oppelt, a Land Heritage Institute board member and volunteer who’s also the great granddaughter of John Watson, who farmed the site in the 19th century. “It bears the mark of the people who lived here; a clashing and blending of cultures that produced the independent, modern-day Texan.”

The homestead rests above the south bank of the Medina River among stands of prickly pear and honey mesquite. Hunter-gatherers once thrived where equestrians and bicyclists now explore the 20-plus miles of the multiuse Los Caminos Naturales Trail System. The preserve protects six archeological sites, including the Richard Beene site, an ancient campground named for a field inspector who found the ruins. The site represents a rare 10,000-year record of prehistoric occupation, evident in layers of extensive stone-tool production, campfire hearths, and freshwater shells. Archeologists excavated the find from 1989 to 1991, using bone and shell analysis and carbon dating to study the lives of prehistoric people. Although the excavation has been covered with soil to preserve any surviving archeological record, installations along the trail display photos of recovered stone points and tools.

The documents that record the homestead’s deed and sale highlight another major chapter in the story of Texas and the preserve. The acreage that would one day become the Presnall-Watson property was part of a 13,284-acre land grant that Spain awarded to royalist Juan Ignacio Pérez. Pérez raised livestock on the ranch, exporting horses and cattle as far away as Louisiana and Coahuila, Mexico. He died in 1823, leaving the ranch to his son José. But the Texas Revolution forced José to take his family south to safety, giving the Republic of Texas an opportunity to appropriate and divide the property. In June 1837, the young nation gave one-third league (1,476 acres) to Bruno Martinez, who sold it in short order to John W. Smith for $300. The property changed hands several times until the 1840s when José Pérez returned to the Republic and filed suit for his inheritance. The suit triggered a legal battle that lasted until 1851, when the Texas Supreme Court denied Pérez’s claim.

Construction of the farmhouse began shortly after Louisiana cotton farmer Harrison Presnall and his brother-in-law Stephen Applewhite purchased the parcel in 1852. Presnall and Applewhite raised cotton with slave labor on the property before switching to cattle after the Civil War. Presnall built the two-room home with yellow sandstone blocks and mud mortar, adding a central chimney, two fireplaces, and a two-room basement accessed by masonry stairs. About 30 years later, in 1883, Watson bought the acreage from Presnall’s estate for $6,000. The Watsons encased the entire original structure within a large, two-story frame addition, one of several changes they made to the home as their farming and ranching operation prospered. The encasement likely helped preserve the original sandstone house, which is in good condition for its age. Today, the Land Heritage Institute is in the midst of restoring the entire farmhouse, a work-in-progress dependent on funding.

Oppelt recalls visiting her great aunt, Cora Watson, who lived in the house from the early 1900s to her death in 1971. “The farm house has a wonderful little stairway leading to the attic, and sometimes Aunt Cora would let me climb it and then play in the attic where trunks full of treasures made for an afternoon of fun,” Oppelt says.

Cora was the second generation of Watsons to live in the house before the family sold the property in 1974. The land stayed in agricultural use until 1990, when the San Antonio Water System bought it for the development of a reservoir. The Applewhite Reservoir project fell apart in 1994, however, leaving the homestead vulnerable to the elements until the Land Heritage Institute—a consortium of conservation and civic groups—rescued the site in 2009 after raising money from a variety of sources to purchase the property and
begin restoration.

“We were inspired to devote substantial time and treasure to this project because of our love of the land, the wildlife, and the Medina River, which has inspired us our whole lives and which continues to inspire us,” Oppelt says.

Along with the farmhouse, structures on the homestead include a large barn the Watson families used for raising quarter horses, mules, and paint horses. Another barn, originally part of the Pérez-Walsh Ranch north of the Medina River, served as a pigeon house with an elongated loft with cutouts for the birds to nest. The homesteaders ate pigeons regularly in soups, stews, and other dishes, reserving their valuable livestock for sale at market. “I recall Mrs. Walsh telling me how happy she was once she never had to bake or eat another pigeon pie again,” Oppelt says.

“The property is where people from many cultures found the natural resources to live and prosper.”

Historically, a spring that fed a small stock pond provided fresh water in front of the old house. But the drought of the 1950s ended the spring’s flow and dried up the pond. According to Watson family lore, the pond’s mud saved the life of the elder Watson’s 5-year-old son, Ralph. The boy, bitten on the toe by a rattlesnake, stood in the cool mud in order to slow the effects of the venom while waiting for medical attention to arrive.

For its part, the Land Heritage Institute aims to preserve the site’s history while providing educational opportunities, such as for student filmmakers and sustainable land-use techniques. Oppelt says the institute has partnered with schools for student projects such as eradicating invasive species, restoring the farm’s 125-year-old chuckwagon, and researching and designing historical costumes for interpreters.

The institute also promotes recreation as a gateway to understanding the natural world. Located above an important South Texas riparian corridor, the homestead and its lands offer tantalizing opportunities for birding and wildlife watching, including sightings of the Eastern bluebird, broad-tailed hawk, and painted bunting.

Though little-known among the state’s hundreds of heritage sites, the Presnall-Watson Homestead offers a remarkably intact perspective spanning the breadth of Texas history. “Visitors who appreciate history, nature, ranching, and outdoor recreation would all be interested in the Land Heritage Institute and the Presnall-Watson Homestead,” Oppelt says.