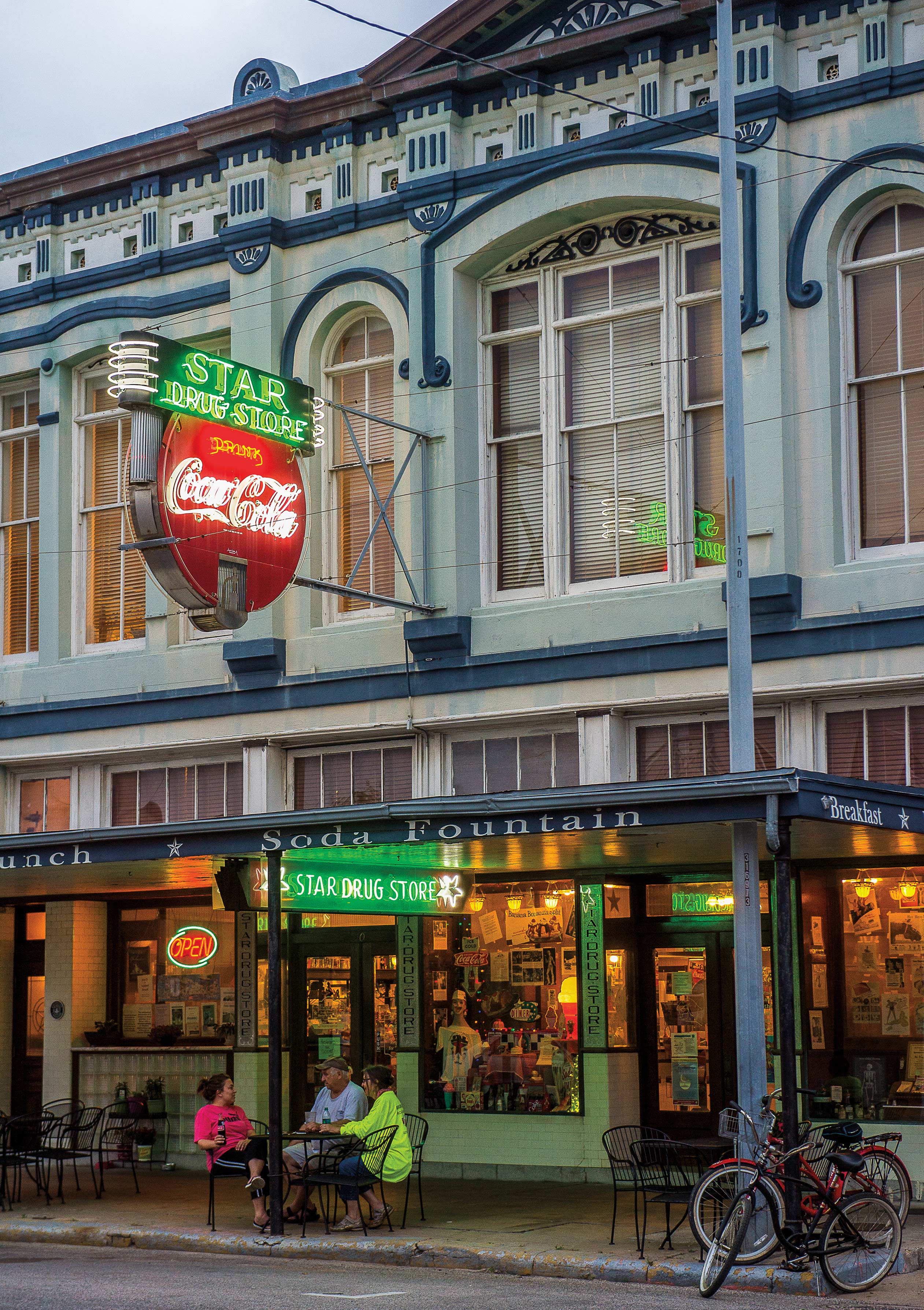 The Star Drug Store traces its origins to 1906. The neon Coca-Cola sign dates to the 1940s.

Customers once came to the Star Drug Store for their medicinal needs, but today they come for a different kind of pick-me-up: meals and merchandise. For more than a century, the Star has been a fixture in Galveston’s historic downtown. A glowing neon-lit Coca-Cola sign shines like a beacon above its sidewalk awning on 23rd Street, a few blocks south of the Strand, the island’s main commercial artery. This vintage porcelain sign, which dates from the late 1940s, is said to be one of the last of its kind.

Set in an 1886 building, the store’s interior also harks back to olden days. A local druggist named Charles J. Michaelis bought the building in 1906 and added the soda-fountain counter in 1917. The original glass-fronted cabinetry lining the walls once displayed elixirs, tonics, and tinctures; now it showcases bags, hats, and baubles to tempt impulse shoppers.

One of the best-selling items is the $20 T-shirt emblazoned with the store logo, derived from its iconic Coca-Cola sign. Various vintage-style tin signs promoting Coke and other classic products decorate the mezzanine (and are also for sale for $12.95). However, the Star is especially known for its year-round stock of Mardi Gras masks, which range from $5 for the simplest design to $45 for a rhinestone-bedazzled mask festooned with feathers worthy of artistic display or the fanciest masquerade balls.

Mardi Gras masks may seem like an unusual find at a pharmacy-turned-restaurant emporium, but owner Natili Monsrud says their popularity is a natural fit with the island’s history. By the time the Star had opened its soda fountain, Galvestonians had already been feting Fat Tuesday with costume balls and parades for more than 30 years. World War II disrupted the custom in 1941, but the community revived the tradition in 1985 and Mardi Gras has been going strong in Galveston ever since. One of the main parade routes starts just a few blocks from the Star’s location and travels along the Strand. “We host the third-largest Mardi Gras in the country,” Monsrud boasts. “We get people from all over.” Even out of season, visitors come to the Star in search of a mask. “It’s a souvenir to remind them of their experience here on the island.”

Invariably, Star Drug Store shoppers stick around for the food. Hungry patrons perch on barstools at the horseshoe-shaped marble counter, where they can get a good view of the cooks tending burgers sizzling on the grill and whipping up creamy milkshakes. Pharmacies began adding soda-fountain counters around the turn of the 20th century in response to the popularity of carbonated beverages. Originally considered “medicinal,” druggists sometimes laced these drinks with cocaine and opiates until the government began regulating those substances in 1914. Yet the bubbly, syrup-flavored beverages continued to be popular—and they remain so. The Star still offers an array of fizzy flavors, including lime, cherry, vanilla, strawberry, chocolate, and grape, which can be mixed with ice cream to make an ice cream soda. It also features classic treats such as ice cream sundaes, banana splits, and frothy egg creams (chocolate milk with a spritz of soda). 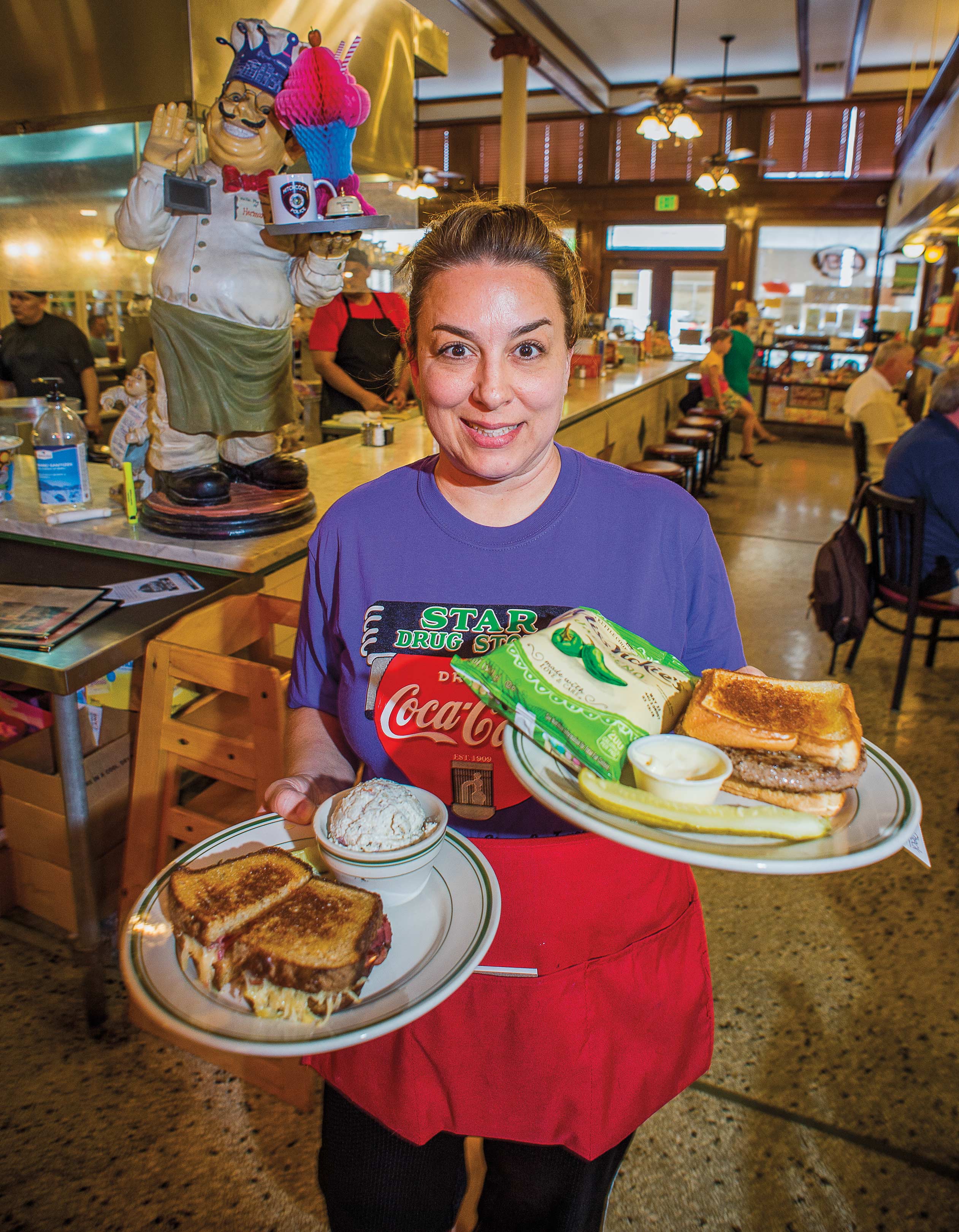 The Star tempts customers with breakfast and lunch favorites like omelets, patty melts, and Reubens.

The Star dishes up heartier fare as well. For breakfast, choose among omelets, stacks of golden pancakes, and French toast dusted with powdered sugar, plus sides of bacon, sausage, or grits, and wash it all down with a cup of chicory coffee with evaporated milk. The menu also faithfully re-creates traditional lunchtime favorites: Swiss cheese-smothered patty melts, pimento-cheese sandwiches, and Reubens with sauerkraut and Russian dressing on homemade Latvian rye baked by Monsrud’s father.

Monsrud wanted to develop a menu that was “tried and true.” “You can’t go wrong with a burger and a shake,” she says. Yet she has devised some inventive twists, adding a zing of horseradish to the tuna salad and pineapple chunks to the curried chicken salad. She concocted a new dessert, too: the Shipwreck Float, a scoop of vanilla ice cream buoyed by a blend of Coke, Dr Pepper, root beer, and cherry syrup.

Monsrud’s parents, Marty and Genece Tilts, purchased the Star building in 2001. By that time, the store had sat dark for about a decade, and a fire in 1998 had gutted the upper story of the building, causing extensive smoke and water damage to the first floor as well. Over the course of five years, they brought the property back to life, preserving its historical details. They also installed a new railing on the store’s mezzanine balcony, where pharmacy patients once rested on cots while recovering from treatment, to allow visitors a bird’s-eye view of the activity below. “We’ve kept it authentic,” Monsrud insists. “Everyone who comes in says it’s just like they remembered. They feel like they are stepping back in time, and they come in to soak up a little bit of history.” (The family made some improvements as well, transforming the second-floor space into two loft apartments, which are now available as vacation rentals.)

Some passersby are drawn into the Star by its storefront display, a collection of the store’s own historical artifacts. The assortment of old apothecary items includes vials and pillboxes left over from when the building still served as a pharmacy. These antiques are not for sale, but Monsrud does have packets of over-the-counter medicines available for ailing customers as a nod to the store’s former purpose—and so she can still call the Star “the oldest drugstore in the state.”