From paintings to parrots, the pleasures of a Valley haven 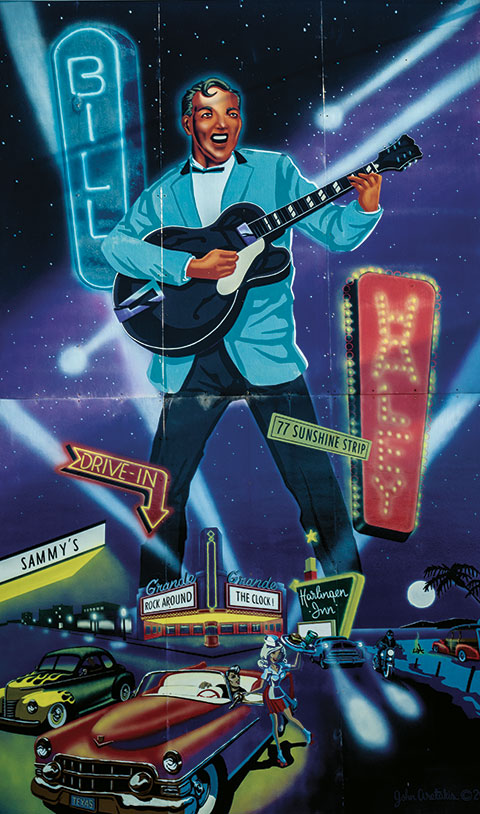 Harlingen came to life in 1904 as a crossroads on the Arroyo Colorado, garnering the daunting nickname of “Rattlesnake Junction” because of the abundance of rattlers that greeted railroad workers. While Harlingen’s frontier past lingers in art and artifacts, today the town is better known for its expansive downtown murals, Rio Grande Valley culture, and a subtropical climate that invites you to slow down, smell the orange blossoms, and watch flocks of wild parrots swirl above the palms.

For information about visiting Harlingen, call the Harlingen Convention and Visitors Bureau at 800/531-7346.

Harlingen’s historic downtown is a landscaped slice of Americana brimming with simple pleasures and unexpected treasures. To acquaint visitors with the area, Downtown Harlingen, a public improvement district, offers free, hour-long walking tours on Saturdays during the winter. The tours focus on notable historic buildings, as well as seven of the 20 larger-than-life murals that decorate downtown streets and businesses.

Harlingen’s tradition of murals stretches back to the 1940s, and the city continues to commission new outdoor paintings to illustrate various aspects of its past. “Murals tell stories while inviting you to see art as fun,” says Cheryl LaBerge, the manager of Downtown Harlingen.

The 112-foot-long Downtown Harlingen: Where the Past is Present depicts seven historic buildings in vibrant, vintage-postcard style. Painted by Weslaco artist Brett Oberthaler, the mural shows the buildings in their 1920s and ’30s heyday, although each structure continues to play a role in downtown. “This mural shows how historic buildings create a strong sense of place when preserved and adapted to new uses,” LaBerge says.

Another part of Harlingen’s history is depicted on the eastern wall of the former Rialto Theater, now an event center. Created by Angel Hernandez in 2004, the Golden Age of Hollywood and Mexican Cinema in Harlingen features the town’s old cinema marquees, along with cameos of cowboys, heroes, and femme fatales.

At the Early Days mural, painted by Iowa artist Jermain Steed in 2001, LaBerge fills in historical information about the town’s Hispanic and Anglo pioneers. The mural, which faces the downtown railroad tracks, depicts influential elements of the city’s past, including Arroyo Colorado, a creek that first attracted settlers to Harlingen’s location.

Also next to the railroad tracks, a 1975 ceramic tile mosaic called The History of Mexico and Mankind is the stunning centerpiece of Centennial Park. The late Mexican artist Raúl Esparza Sanchez created the mosaic, which captures historic moments in Mexico and was installed in Harlingen in 2010.

The tour also pauses at the tin-ceilinged Army Surplus Store, where you can stock up on camouflage and outdoor gear; Cooley’s Classic Cars, a retired Chevy dealer’s collection of vintage cars; and the office of Downtown Harlingen, where historic photos chronicle the city’s evolution from the days of dirt streets and hitching posts.

Next, the tour visits the tropical garden that is Grimsell Seed Co., a nursery that’s been around since 1909. Across the street, tourists can peer up at the mural of 1950s rock-and-roller Bill Haley, who spent his last years in Harlingen.

LaBerge wraps up the tour by pointing out the downtown galleries: Beyond Arts Gallery, which exhibits works by local artists; the D’Arte Centre, which showcases the work of Harlingen Art Forum members; and the Schaub Art Studio, featuring the pop art of Tony Schaub and set in a 1917 mortuary building whose doors are said to swing open mysteriously.

While downtown, a worthy stop for lunch is El Sombrero, which serves up delicious panchos (a variation of nachos topped with beef or chicken fajitas) and a tasty fajita-avocado plate. Then stroll through downtown shops like The Antique Emporium, The White Lion, and Coun-Tree Woods to find vintage earrings, funky bookends, and handcrafted mesquite tables and benches. Wrap up the afternoon by sliding into a booth at Ol’ D’s Soda Shop, ordering a root-beer float, and listening to the band play ’50s and ’60s country and rock. Before dark, dash over to City Lake (once a watering hole for livestock) to enjoy sunset and the noisy red-crowned parrots circling overhead as they settle into their roosts.

Morning is a perfect time to relish the Valley’s citrus industry, which provides Harlingen with more than its fair share of sweet and tangy oranges and grapefruits. Drive west of town about 10 minutes to Granny Clare’s Citrus at Rio Pride Orchard for a jug of fresh orange juice or red grapefruit juice, squeezed from the fruit of the orchard’s 5,000 trees. (The store opens from mid-October through about mid-April.)

Next, head to La Reyna Bakery, where the 11 glass-fronted cabinets are filled with all types of pan dulce. The challenge is choosing between empanadas of pineapple, cheese, or pumpkin and other tasty pastries, such as gingerbread pigs (called marranitos), puffy molletes topped with colored sugars, and the flaky cuernitos.

Along the wide trails, interpretive signs label the heart-leafed hibiscus, mistflowers, and other plants. The night-blooming cereus cacti drape like fainting Victorian ladies over the lower limbs of mesquite and ebony trees. Mockingbirds run through their repertoire, while whiptail lizards duck for cover in the prickly-pear thickets. Amazingly, this was the site of an illegal dump 25 years ago. Volunteers with Rio Grande Valley Texas Master Naturalists and the Arroyo Colorado Audubon Society have worked with the city to transform the 55 acres into a landscape alive with butterflies and birdsong.

North on Loop 499, the Harlingen Arts & Heritage Museum is home to three restored historic buildings—the home of town founder Lon C. Hill, Harlingen’s first hospital, and the Paso Real Stagecoach Inn. The latter, a two-story example of Texas frontier architecture, operated from 1860 to 1904 next to the Arroyo Colorado ferry, several miles north of Harlingen. “Of 31 stage lines in Confederate Texas, no other was more vital nor more interesting to travel than this through the Paso Real,” reads the Texas Historical Commission marker, referring to encounters with bandits, deserters, and cotton smugglers.

Nearby, the Iwo Jima Memorial Monument features the original 1950s fiberglass-and-plaster mold from which the bronze sculpture at Arlington National Cemetery was cast. Sculptor Felix W. de Weldon donated the statue, which depicts 32-foot-tall figures raising the flag on Mount Suribachi, to the Marine Military Academy, a local boarding school. The scene has not lost the power to inspire awe and gratitude. An Iwo Jima survivor is among the volunteers at the adjacent Iwo Jima Museum. Don’t miss the 30-minute documentary film about the arduous, 36-day battle to secure the volcanic island.

A relaxing way to finish the day is back downtown on the patio at Colletti’s Italian Restaurant, located on the ground floor of the 1927 Reese building, originally opened as a hotel. Colletti’s salutes its repurposed home with a cocktail called The Reese, a refreshing mix of mint, vodka, and limoncello. Like Harlingen, the drink adeptly blends the past with the present.