Written by Lois Rodriguez, Photographs by Will van Overbeek | From the January 2014 issue | Updated: July 9, 2020 | Filed Under: Culture 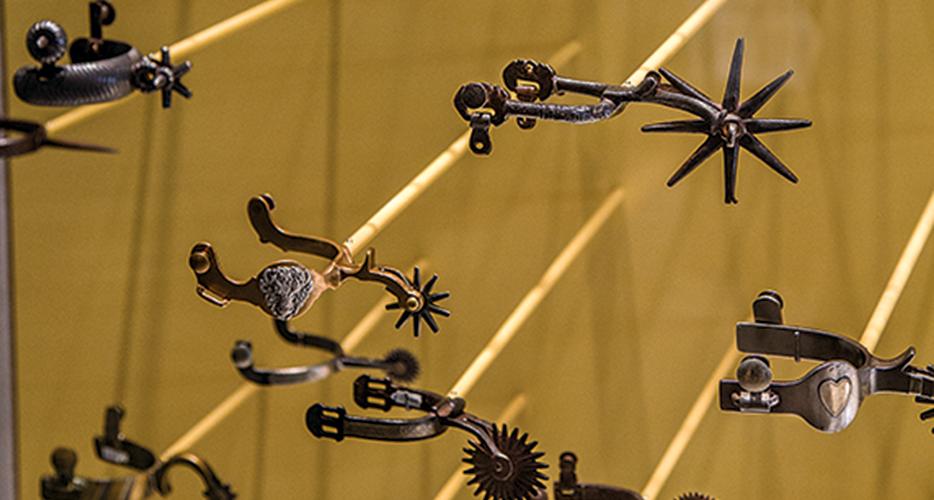 In the Movement Gallery, more than 100 spurs are displayed in an aquarium-like setting.

The late, great Texan Dolph Briscoe Jr. loved his native land as much as anyone who gazed upon the storied walls of the Alamo, beheld the timeless passage of the Rio Grande, or strode both proud and humble beneath a vast Texas sky. Born in Uvalde in 1923 and raised on the 50,000-acre Chupadera Ranch, he served as governor of the state from 1973 to 1979.

Governor Briscoe loved the land so much, in fact, that before his death at age 87 in 2010 he owned a larger expanse of Texas—more than 600,000 acres—than any other individual. Wishing to help others experience and appreciate the history and cultures of Texas and the West, Briscoe joined a handful of like-minded folks in 2003 to plan a museum about the legendary territory. The product of their efforts—the Briscoe Western Art Museum—opened recently in downtown San Antonio. Mixing vintage and contemporary painting, photography, and sculpture with historic artifacts, the Briscoe offers an experience as romantic and diverse as the West itself.

“Governor Briscoe wanted the museum to be in San Antonio because it’s the most iconic of Western cities,” says museum director Steven Karr. As befits the museum’s name, the Briscoe is not a history museum, but an art museum, Karr emphasizes. And to demonstrate that both the reality and the myth of the West are with us yet, the Briscoe does not portray the story of the West in chronological order.

Located between the River Walk and West Market Street, just blocks from the Alamo, the 700 artworks and artifacts in the Briscoe galleries are housed in an Art Deco building that first opened in 1930 as the public library and later served as the Hertzberg Circus Museum. Adjoining the historic structure, which was restored as part of the Briscoe’s $32 million development, the new three-story Jack Guenther Pavilion hosts temporary exhibits and events.

The arched entrance on Market Street (the museum can also be entered from the River Walk) retains its original frieze depicting the Parthenon, the Acropolis, the Alamo, and other examples of world architecture. Inside, the handsome lobby features details that were uncovered during the restoration, such as a row of eight-inch silver medallions resembling buffalo and Indian-head nickels that borders the wall at the ceiling.

“Change is the watchword of the West,” explains the signage for the 13-foot-tall, one-ton bronze sculpture Visions of Change in the museum lobby. Arizona-based artist John Coleman sculpted the piece in 2012. Shaped roughly like an upside down “V,” the sculpture depicts a Native American standing above a cascading stream of bison. On the other side, a cowman stands over a descending herd of Longhorns.

Beyond the lobby, a replica of a nine-passenger Wells Fargo stagecoach looks ready to hitch up the mules for the 1,500-mile trek of “The Jackass Mail,” a mid-1800s stagecoach route between San Antonio and San Diego. Nearby, photogravure prints by Edward S. Curtis hang beneath the modernist mural Wild Hors-es: A Set of Four Panels by Millard Sheets.

Also on the first floor, the Ruth McLean Bowman Bowers Gallery highlights the legacy of women in the West with artifacts such as a 19th-Century serape from Saltillo, Mexico, and an Apache basket woven from willow and devil’s claw.

Stairs covered with buffalo hide lead to the second floor mezzanine, where artworks like the 2010 painting Eagle Dancer Potawatomi by Z.S. Liang highlight the enduring and universal appeal of the West. Born in China in 1953, Liang came to the states to further his education in 1982, and American Indians became the primary subject of his life’s work. Other artists represented on the mezzanine include Alan Houser, the first modernist American Indian sculptor.

The third floor presents four galleries with linked themes—Movement, Work, Conflict, and Opportunity. In the Movement Gallery, snakes and devils slither through braided silver and tooled leather on Pancho Villa’s last known saddle. It’s said that General John J. Pershing inspired the saddle-makers when he allegedly called Villa a devil and a snake after Villa’s 1916 raid on Columbus, New Mexico. Nearby, the museum displays dozens of modern and antique spurs in a plexiglass case, like a school of fish, their frozen choreography slyly suggesting the notion of movement.

In the Work Gallery, a 1910 John Deere chuck wagon evokes cowboys, ranching, and trail drives. An early- 1900s banjo stamped C.V.D. King Ranch hints at entertainment on the ranch and range. Western art titan Frederic Remington portrays another frontier occupation with his painting Argument with the Town Marshall, which appeared in Collier’s magazine in 1905. Two untitled paintings by Guadalupe Morales, one from 1890 and one circa 1920, depict vaqueros working with steers, revealing the Spanish and Mexican origins of the American cowboy.

A large, interactive diorama of the Alamo takes command in the Conflict Gallery, augmented by a 1700s Mexican siege cannon used in the battle and a piece of lead shot excavated from the Alamo grounds. The 1974 bronze sculpture And Finally Crockett Fell, by Fritz White, enlivens one of the most debated deaths in Texas history. Spurring reflection on the long, tortured path of war, these words from Walt Whitman appear on the gallery walls: “What is any Nation, after all—and what is any human being?”

The fourth theme, Opportunity, is represented by artifacts such as a Spanish colonial sanctification bell used at San José Mission in San Antonio in the 1700s, and a 1901 Oklahoma land grant document issued to the great Comanche chief Quanah Parker. But the exhibit also reminds us that not all opportunities in the West were wisely pursued with its inclusion of a map of the failed 1840s Texan invasion of Santa Fe.

A fifth gallery on the third floor exhibits art and artifacts on loan from South Texas ranchers and collectors Enrique and Lydia Guerra. In a video clip, 84-year-old Enrique chronicles his ancestors’ journey to New Spain, where the Guerras received land grants on both sides of the Rio Grande in 1748. The room’s treasures include a gorgeous 1858 rosewood guitar, inlaid with a mother-of-pearl and carved ivory dedication to Benito Juárez, as well as a Comanchero jacket decorated with glass beads. Comancheros were New Mexico territory traders who conducted business with Comanches and other Plains tribes, often trading with livestock they stole from frontier Texas and northern Mexico.

The Guerra Gallery also features an 1852 gold-handled sword presented to Mexican President Santa Anna, and several distinctive saddles. An 1840s Texas saddle sports a goat-hair caboose, while the silver pommel of a Guerra family saddle has a Mexican eagle on one side and an American eagle on the other. Silk embroidery adorns a rare Spanish viceroy’s saddle from the 17th Century. Its stirrups could be used as weapons, and bells on the saddle made it jingle. The museum also exhibits a 1975 painting of the Guerra ranch by Melvin Warren, said to have been Governor Briscoe’s favorite artist.

“This is a great time to be alive and an even greater time to enjoy the privilege of being a Texan,” Briscoe wrote in his 2008 autobiography, Dolph Briscoe—My Life in Texas Ranching and Politics. He encouraged young Texans and Westerners to learn about the past and their forebears’ lives and traditions. “You can truly say that we have a great history and heritage, as unique as it is,” Briscoe concluded, “but I also firmly and unequivocally believe that the best is yet to come.”

In the San Antonio museum that bears his name, the governor surely would savor that promise of the best—the best of the West.