Thousands of visitors to Seminole Canyon State Park have marveled at Worrell's striking sculpture reaching over the canyons of Southwest Texas. 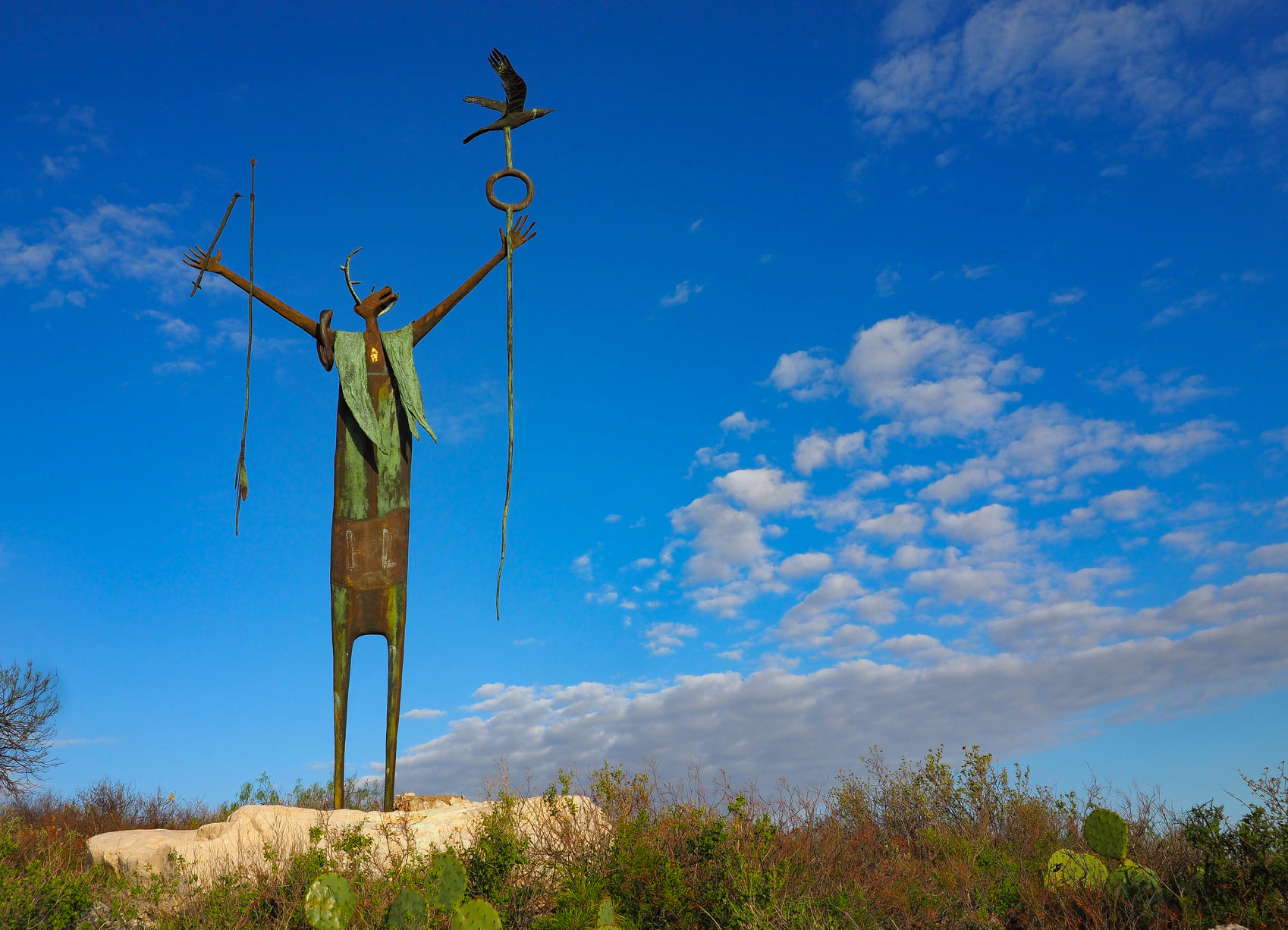 A canoe trip down the Pecos River in 1979 changed the course of Bill Worrell’s life. On a stormy night, the Hill Country artist and his two paddling companions sought shelter under a rocky overhang, where Worrell got his first glimpse of ancient rock art.

“I had no idea what I was looking at, but I immediately connected to their beauty,” Worrell said of the trip, according to a biography from the K. Newby Gallery in Tubac, Arizona. “When we got off that river, those images were still in my head, and I felt this need to make them my own, explore them and try to understand them and their creators.”

Worrell, whose work introduced a modern audience to rock art made by some of Texas’ earliest inhabitants, died April 29 from complications related to cancer, said Spider Johnson, a longtime friend of Worrell’s.

Worrell’s paintings and sculpture, which was featured in galleries across the Southwest, portrayed his view of the ancient artwork that inspired him. His bronze statue, The Maker of Peace, stands atop a ridge at Seminole Canyon State Park and Historic Site west of Del Rio.

Worrell did stints as a Baptist minister at a small country parish, with the Boy Scouts of America, and at an insurance business. He also invented a contraption called the Go-Cooker Auto Oven, which attached to a car’s exhaust pipe, allowing the driver to cook food while motoring down the road.

But it was Worrell’s experience on the Pecos River that turned Worrell’s art career around. He went on to develop a style—first in sculpture, then in painting—that represented primitive art and introduced it to a modern audience, said long-time friend Spider Johnson, a fellow artist.

“It introduced the value of those ancient artists to people who otherwise would not have run across it,” Johnson said. “He always gave the ancient Texans, as he called them, credit.”

In recent years, Worrell split his time between Santa Fe and his home along the Llano River near Mason, where he lived on a spread with a pole barn dubbed Medium Cotton, a house called High Cotton, and a studio nestled among the granite outcroppings.

“We had a ritual developed through our many adventures of sitting together at the end of the day and having a shot of tequila and discussing important philosophical matters,” Johnson said. “He was a bigger than life guy.”

Over the years, Worrell taught art at North Texas State University, Texas Tech University, and Odessa College, but he preferred creating to teaching.

“He filled up a room,” Johnson said. “He was gregarious, friendly, and made everyone feel important. He paid special attention to the ladies, and was very popular with them. We used to joke if we could take whatever he had and bottle it, we would never lack for a sweetheart.”

Worrell was a songwriter, too, and although he wrote the lyrics to hundreds of songs, most of them were sung to the same melody, Johnson said.

Carolyn Boyd, an artist-turned-archaeologist who founded Shumla Archaeology Research and Education Center in Comstock, said Worrell was awed by rock art, and he tried to express his appreciation for the people who had created it through his own work. “I think he captured that so beautifully in every one of his pieces,” she said.

“It wasn’t like ‘Hey look what I did,’” Petruney said. “It was ‘Hey, we’re going to go look at the pictographs that inspired this sculpture.’”

A documentary, Emerging from the Garden of Thorns, about Worrell, was released in 2019. He is survived by two children, Sawndra Worrell and William Worrell Jr.