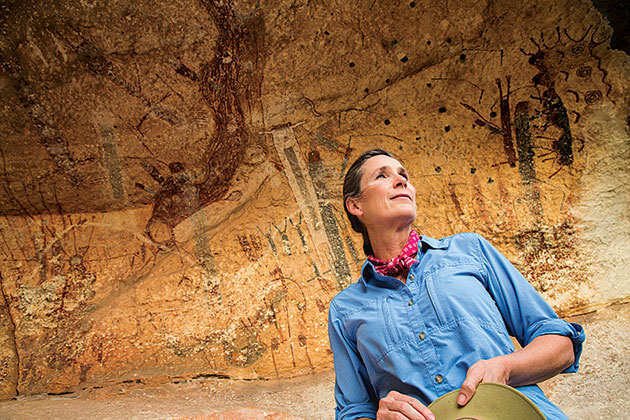 Working as a muralist in the late 1980s, Carolyn Boyd traveled to the cliffs and rock shelters flanking the Pecos River near Del Rio to see the area’s famous Native American paintings, which date back 4,000 years.

“Looking at that rock art as an artist, I recognized the work that went into producing these murals,” she says. Inspired in part by their beauty and mystery, Boyd went back to school, eventually earning a PhD in archeology. That, she says, gave her language to convey the murals’ importance and to support their conservation.

While pursuing her degree, she realized how vital it is for people to experience the artwork firsthand, and in 1998 she founded the Shumla School, a nonprofit archeological education center in Comstock that has since served more than 30,000 students of all ages.

As executive director of Shumla, Boyd still makes time to take groups into the field. “My passion is to preserve and protect this art,” she says, “and also to provide opportunities for people to see it.” She also teaches for Texas State University, hosts programs for volunteers and high school students, and stages weeklong summer camps.

The ability of those ancient artists is, she says, mind blowing. The artists had to make their own paints, emulsifiers, and brushes, and they built scaffolding to create figures up to 30 feet tall. The murals were a communal effort, she says. Most of the art is on private land, but Texans can see excellent examples at Amistad National Recreation Area and Seminole Canyon State Park & Historic Site.

“We are in a race against time to document these ancient pictorial texts,” says Boyd. “They may well be the oldest ‘books’ in North America.”