Have Pet, Will Travel

Me and You and a Dog Named Mooshu 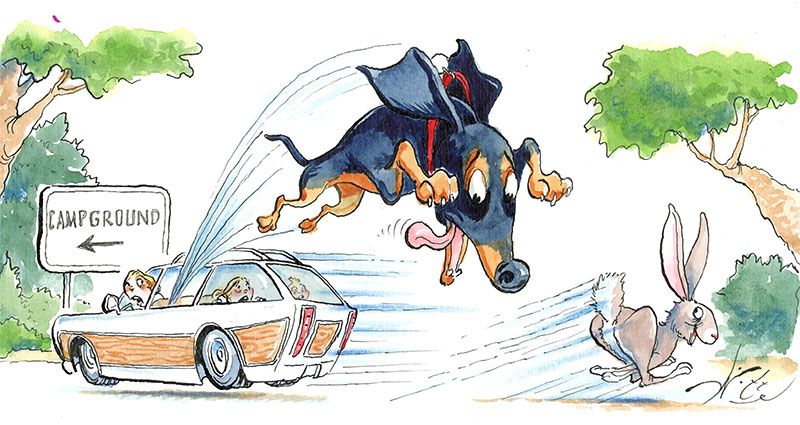 For me, traveling with furry, even feathery, friends is sort of a family tradition. When I was six we took our pet duckling to spend a week with us in a lake cabin at Possum Kingdom. We’d walk Donald to the water each morning for a swim. It never occurred to me that we were in danger of the little yellow fluff ball paddling into the wilds, or really, that he would be in any danger at all. Until the morning the water moccasin slithered by a little too close for comfort. After that we kept Donald near the campsite and provided him with a private pond — the big tin tub we’d formerly used for icing soda.

When I was 12, we got a puppy we named Perp-A-Derp. Perp was a dachshund terrier mix with long ears and basset hound eyes. She was low-key at home, but her disposition changed when she became a traveler. We took her with us to Lake Whitney State Park. As we were searching for a campsite, she spotted her first rabbit and torpedoed out a half-open window. She hit the soft soil still running then slid on her belly like a baseball player sliding for home plate. She was unhurt and the rabbit got away clean, but she never dove out a window of the car again.

Well, at least out of a moving car’s window. Perp also took a road trip with us to Florida. A trip of that length is tough going with two tweens, so I am not sure exactly what my parents were thinking (although, now that I’m aware of the cost of kenneling, I guess I do understand). We were driving to Miami to see my grandparents. Before crossing the state line into Louisiana we stopped for a bite. We’d left before dawn, as was my father’s way on any car trip, so it was early and still cool. We left Perp in the car, but left the windows wide open. Due to the aforementioned rabbit chase, we were sure she wouldn’t be motivated to fly again.

Perp-A-Derp was low-key at home, but her disposition changed when she became a traveler.

I sat in a booth next to a window, my little brother across from me. We studied the menu, thrilled to see waffles and whipped cream. Mom and dad were stoking up on coffee. Out of the corner of my eye I saw a shadow cross the window. I looked out. Nothing. It happened again. This time I whipped my head around fast enough to see the tips of Perp’s ears as she slipped from view. For the next five minutes, that pup pogo-sticked outside the window — how she found us or whether she had spy-hopped other windows first, I’ve no idea. Afraid mom and dad would call off the waffles and send one or both of us to sit in the car with the dog, Jimmy and I tried to act like we didn’t know that there was a dog on a trampoline outside our window.

Giggles eventually gave the doggie sideshow away, and we did end up eating in shifts. But that day became a part of family travel lore that still makes us giggle. It’s the one detail from that long roadtrip that I remember.

I have continued to travel with pets. The current diva, a Chinpoo named Mooshu Pork O’Malley O’Rourke, was invited to join in for a long weekend stay at a friend’s South Texas ranch. A large and lovely historic farmhouse became headquarters for five couples, nine kids, and six dogs. There was much grilling, communing, card playing, romping, and laughter. And all the dogs were part of the fun. Except one. Mine. Not unlike the way I handled expanded family gatherings as a child, Mooshu staked out our room and stayed there. If she could read, I’m sure she would have curled up in her bed with a good book. She was quiet all day, but apparently roved through the house at night. Stealing.

Each morning of our visit I’d find more dirty socks in her bed. The exact count was unsure because like a dragon sleeping atop its hoard, she’d nested in the cherry-picked assortment she’d stealthily gathered during her night raids.

After acquiring a few from each man, woman, and child in the house, she found her collection to be complete. I knew this when she appeared in the kitchen one morning during breakfast. She had a look on her face as if to say, “My work is done here. Let’s go home.”

We did, the next day, but only after we’d returned all of Mooshu’s ill-gotten souvenirs. Like many travelers she will have to make do with the memories.