Take in a 10-acre cornucopia of family fun

Written by: Bob McCullough
Photos by: Will van Overbeek

Written by Art Williams, Photographs by Will van Overbeek | From the October 2017 issue | Updated: September 18, 2017 | Filed Under: TRAVEL 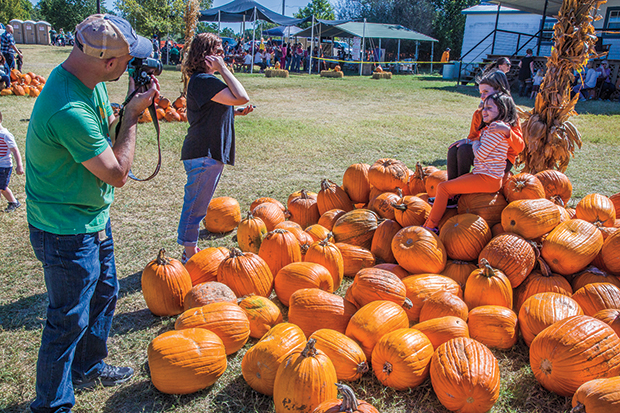 Pumpkin painting, pony rides, and a petting zoo top the list of family fun at the Great Hill Country Pumpkin Patch in Medina.

As a young city slicker, I eagerly anticipated summer visits with my grandmother and other kinfolk in their tiny, two-gas-station town southwest of Fort Worth. The local ranchers knew me and let me tag along as they rounded up cattle or sheared sheep. To them it was work; to me it was fun, and I learned a lot about how to grow things.

Those childhood memories resurfaced as I surveyed a veritable blur of activity—the sweet chaos of The Great Hill Country Pumpkin Patch—on a Saturday afternoon last year in the usually sleepy Hill Country community of Medina. On Saturdays, Sundays, and Mondays in October, Love Creek Orchards attracts thousands of guests with wholesome family fun built around crops such as apples, pumpkins, corn, and hay.

The patch’s 10-acre site on the southern outskirts of town pulsed with smiling, giggling kids dashing from one fun spot to another, with parents or grandparents trying their best to keep up. They fanned out to navigate the hay-bale maze, ride a barrel train, dress a scarecrow, meet animals at the petting zoo, or bump up and down on a flatbed-trailer hayride. For a nominal fee, some painted a pumpkin, created a sand-art masterpiece, and groomed or rode a pony. Others sampled sweet treats such as apple cinnamon cupcakes, apple pumpkin bread with maple icing, and apple dumplings with apple-cider sauce.

When it came time for The Great Hill Country Symphony to perform, kids of all ages grabbed percussion instruments like tambourines, triangles, and maracas to keep time to the music and engage in what guitarist-harmonica player Lee Haile called “farm-fresh foolishness.” “The louder ya’ll play, the better we’ll sound,” said Haile as he and his two symphony mates launched into “Oh! Susanna” and other silly songs.

Haile also doubled as emcee for apple-eating competitions in which kids and adults, grouped according to age, vied to see who could devour the most of two apples apiece in one minute. “It’s not the size of the person; it’s the size of the mouth,” he wisecracked as the contestants chewed like piranhas to the pulsing strains of the “1812 Overture.”

First-timers like Bruce and Linda Osborne of San Antonio, who were babysitting granddaughters Lilly, 7, and Lucy, 3, said the Pumpkin Patch was a welcome discovery. In fact, they enjoyed the scenic drive up State Highway 16 through Helotes and Bandera and the affordable fun so much that this year they decided to book a trip to a Bandera resort for their entire family, including three more grandchildren from Austin.

Nine-year-veteran festivalgoer Meghann Sauer of New Braunfels, whose three children have “grown up at the pumpkin patch,” said she hears Lee Haile’s songs in her head all year long! Her family not only relishes the event’s array of activities but also the natural treasures nearby. “We camp out at Garner State Park,” she added, “and we like to travel the picturesque, twisting, turning Hill Country highways in and out of Medina.”

Ironically, apples—not pumpkins—get most of the credit for putting The Great Hill Country Pumpkin Patch on the map. The event began as a traditional pumpkin patch and storytelling fest in Devine more than two decades ago and mushroomed into a much larger happening in Medina shortly after the Texas Legislature proclaimed Medina the “Apple Capital of Texas” in the early 1980s.

Love Creek Orchards’ tour guide Genie Strickland shared her knowledge of growing things in a fact-packed, 45-minute tour of the farm that ended in a barn where kids helped sort apples by size on the apple-processing line. “Youngsters need to realize that apples and other types of produce don’t come from the supermarket,” she said. “Unfortunately, many of them have no idea about agriculture, so we want them to have fun at the pumpkin patch, but also educate ’em.”

Strickland shared the story of Baxter and Carol Adams, pioneers of the Texas apple industry, who moved from Houston to Medina in 1980. They intended to raise cattle on a 2,000-acre ranch bisected by Love Creek, but they found the property had been overgrazed. So they sought advice from the late Loy Shreve of Texas A&M University, who suggested growing apples from a tree variety common to Romania.

The initial planting of 100 trees flourished because the Hill Country soil, terrain, and climate are similar to those in Romania. Strickland also pointed out rows of big-tooth maples and said the Adams have made efforts to propagate and save the type of trees that dazzle with fall foliage at Lost Maples State Natural Area at nearby Vanderpool.

In 2012, the Adamses retired, so Stacie and Bryan Hutzler took over Love Creek Orchards’ operations. The Hutzlers had previously acquired The Apple Store gift shop and eatery in downtown Medina that’s known for its fresh apple pie, soft-serve apple ice cream, and SPJ (spicy pepper jack) burgers. On typical weekends year-round, throngs of motorists, bicyclists, bikers, and hikers descend upon The Apple Store, and the numbers mushroom in October with many wandering in for The Great Hill Country Pumpkin Patch.

“Families and especially small children leaving the pumpkin patch are worn out from having fun, yet they’re thanking us for giving them a taste of rural life,” Bryan Hutzler said. “And we’re thanking them for giving us the opportunity to show how wonderful it is to live in the country.”