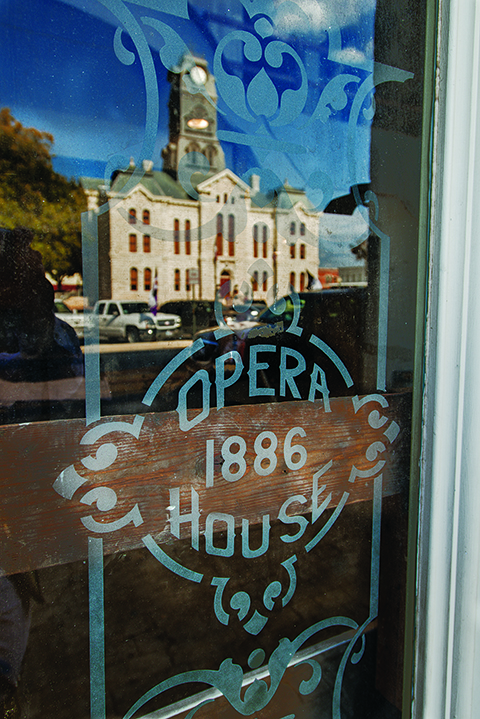 A window of the newly renovated Granbury Opera House reflects the facade of the 1891 Hood County Courthouse in Granbury.

On a stormy night last May, a tornado packing winds of up to 200 mph cut through the North Texas city of Granbury, destroying dozens of homes and killing six people. When that tragic news reached me the next day, I had no doubt that Granbury would recover and come back even stronger. I had traveled to Granbury for the first time the month before the tornado, and it had taken only one visit to grow fond of the place, its people, and its spirit.

“The [tornado] recovery seems to be on track,” says Granbury resident Todd Webster, a winemaker for Brennan Vineyards in nearby Comanche. “The storm took its toll on everyone, but the community came together and helped those who needed help. We’re all moving forward.”

Granbury, the Hood County seat, has a population of about 9,000 residents and sits 40 miles southwest of Fort Worth. When I arrived from the Hill Country, driving north on Texas 144, the road traversed colorful springtime pastures and grasslands. By the time I pulled into Granbury’s town square, I had seen so many historical markers on churches, government buildings, cemeteries, and private homes that I could already sense Granbury’s historic depth.

A prominent example of Granbury’s historic attractions is the Hood County Museum, also known as the Old Jail Museum. Originally built in 1885, the jail operated just off the town square until 1978. Since I’d already read up on legends about Jesse James, Belle Starr, and other Wild West characters who passed through Hood County, I figured the jail would be the best place to get the local take on such notorious outlaws, as well as other local history.

“Jesse James is believed to have ridden through the area and eventually came back and died here, but there is no record of him being arrested in Granbury,” said Karen Nace, president of the Museum Committee, while showing me around the limestone-brick museum. “There’s a story that Bonnie and Clyde came through, but they didn’t rob anybody. They paid for their gas and moved on down the road. Belle Starr apparently spent some time in the western part of the county in an area now named Starr Hollow.”

Still, the jail fascinated me with its small accommodations and kitchen on the bottom floor, where sheriffs and their families lived, as well as copies of hand-written logbooks covering more than a century of arrests for such offenses as adultery, drunkenness, and “lunacy.” Nace then led me upstairs to the jail cells, which look like metal cages, and the high-ceilinged gallows space, but she noted that no record exists of a hanging taking place at the site.

By the time I pulled into the town square, I had seen so many historical markers on churches, government buildings, cemeteries and private homes that I could already sense Granbury’s historic depth.

After touring the jail, I explored more of the Victorian-era town square and downtown, made up of buildings dating to the 1800s that were constructed with locally quarried limestone. This includes the three-story Hood County Courthouse, built in 1890-1891 in the Second Empire architectural style. (Fortunately, the twister spared downtown and its historic structures.)

Strolling the sidewalk, I found plenty of modern-day must-stops, such as Paradise Bistro & Coffee for breakfast tacos, sandwiches, and other light entrées; the Art of Chocolate and Wine Shoppe for more indulgent comestibles; and the aptly named Downtown Store for just about everything else. Stocked with toys, cookie cutters, kitchen supplies, drink coozies, jewelry, ceramics, T-shirts, greeting cards, and lots more, the shop pretty much lives up to its slogan: “Something for Everyone.”

Amid downtown’s clothing boutiques, restaurants, and stores, the square also features the newly renovated Granbury Opera House. The two-year, $3.4-million renovation transformed the 1886 structure into the elegant new home of the Granbury Theatre Company with a redesigned lobby, new
orchestra pit, and seating for more than 300. Completed in December, the makeover paved the way for the company’s 2014 season, which includes A Streetcar Named Desire and The Scarlet Pimpernel.

I imagine that pairing a night at the opera—or a Broadway show—with dinner at the Eighteen Ninety Grille & Lounge will become a new Granbury tradition for both locals and visitors. Located on the square, this casual yet polished restaurant serves New American cuisine—blackened salmon with saffron rice, seared duck with chipotle-raspberry sauce, and Angus beef ribeye that’s been aged on the bone, for example—made with an abundance of Southwestern ingredients and served with Southern hospitality.

From the town square, it’s an easy two-and-a-half block stroll to the Inn on Lake Granbury, where I stayed during my visit. The boutique hotel features 15 comfortable, individually appointed rooms, and the property’s grounds shine with views of Lake Granbury, a swimming pool, and gorgeous landscaping. For an especially restful night, I recommend spending a few moments in the tree swing under the towering, lakefront live oak before hitting the sack.

Granbury offers a range of diversions farther away from downtown. Depending on the season, morning or afternoon activities could include strawberry and peach picking at Fall Creek Farms (about 15 minutes southeast of downtown), 18 holes at the public Hidden Oaks Golf Course, and Saturday wine-tastings at nearby Barking Rocks Winery. There’s also the free Granbury City Beach, which the city built on the shore of Lake Granbury in 2008 when redeveloping its marina. White sand was trucked in from South Padre Island and a concession stand opened for swimmers, boaters, anglers, and sun-worshipers. 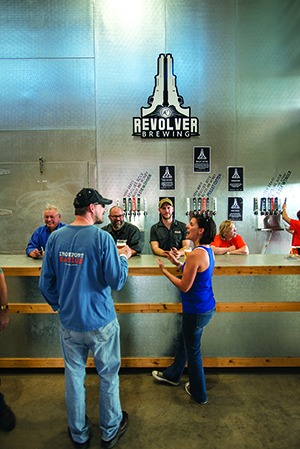 The 2011 opening of Revolver Brewing was representative of the independence, self-reliance and spirit I’d found nearly everywhere in Granbury.

As a fan of craft beer, I particularly enjoyed my visit to Revolver Brewing. Rhett Keisler, who opened Revolver in 2011 with his father, Ron Keisler, and master brewer Grant Wood, showed me around the brewery and explained that they chose Granbury for its proximity to Dallas-Fort Worth and for the supply of pristine water from the Lower Trinity Aquifer. “It was my dream to build a world-class brewery in the Texas countryside, and all the elements are right here for realizing that dream,” Rhett said.

Revolver throws family-friendly gatherings every Saturday afternoon, drawing hundreds for beer tasting, live music, and games. It’s a great opportunity to introduce newcomers to Revolver’s lineup of full-flavored beers, including the top-selling Blood & Honey. The unfiltered wheat beer is made with blood orange zest and honey from North Texas, including from Fall Creek Farms. When I asked about Revolver’s logo, Rhett Keisler told me that he chose the 1847 Colt Walker handgun to be iconic of Texas and representative of the state’s independence and self-reliance.

For me, Keisler’s dream of a world-class brewery in Granbury was rep-resentative of the independence, self-reliance, and spirit I’d found nearly everywhere in Granbury. That’s why I knew the city would recover from last year’s tornado, and it’s why I know I will return.