Follow the Frio: Swim, Hike, and Dance Your Troubles Away in the Frio Canyon 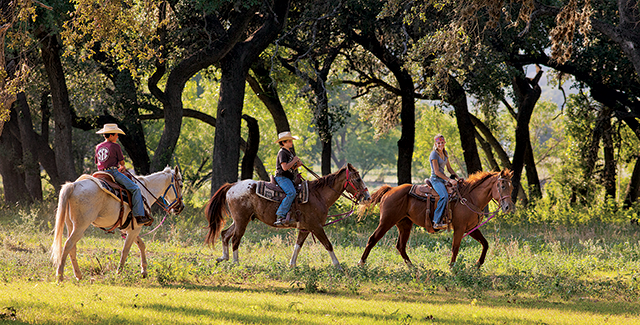 As I climbed down from the Quarter Horse, it occurred to me that the Hill Country trail ride had been the perfect way to ease into my visit to the Frio Canyon area

After navigating hectic traffic to depart Austin and skirt San Antonio, the horseback stroll, atop a gentle bay named “Grandpa,” had reset my tempo and allowed me to down-shift to a more relaxed perspective on the world. I had come to the western Hill Country to explore the rough canyonlands, pristine Frio River, and laid-back culture that have made this a regular getaway for generations of visitors. Thanks to Grandpa, I was ready.

My host for the trail ride was Neal’s Lodges, the 87-year-old Concan riverside resort. We gathered at the company’s new ranch property, about 1.5 miles south of the Concan lodge, for a 50-minute ride that traversed roughly 140 acres of gently undulating Hill Country prairieland dotted with live oak, cedar, mesquite, and prickly pear cactus. A blazing afternoon sun illuminated the pale blue sky. In every direction, green-gray hills and mesas broke the horizon.

Neal’s Lodges reintroduced horseback riding to its offerings last year. “We’re real big on trying to maintain the traditional feel at Neal’s,” says Cody Davenport, a co-owner in the group that acquired Neal’s in 2011. “One of the traditions the guests asked about regularly was horseback riding, because it was so deep-rooted in the families that have been vacationing here for generations.” 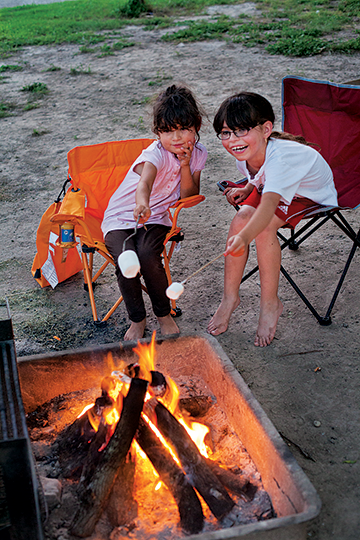 Roasted marshmallows make a fine dessert—or snack at any time of day—during a campout at Garner State Park.

“The swimming hole stays full and continues running due to our springs, but we’re kind of hit and miss on the floating right now. Last year, the rains were timely, and we were able to tube the entire summer, but the summer before that, we weren’t,” Cody says. “The good news is that the drought has forced us to be creative. When the drought breaks, we’ll still have all these things.”

After chatting with Cody, I stopped by my riverside cabin. The duplex cabin’s interior is simple—two beds, white cinderblock walls, a tile floor, and a tiled bathroom with shower—but its large windows, porch, and picnic table draw attention to the main attraction: a hillside overview of the sparkling Frio River. The cabins are also equipped with appliances and supplies for visitors who want to cook their own meals, including a full-size refrigerator, an oven with a four-burner stove, a kitchen sink, dishes, a microwave, a coffee maker, and a barbecue grill.

But dinner would have to wait as the day was drawing to a close and the main attractions at my next destination operate on their own schedule. So I hustled about six miles southeast to the Frio Cave on the Annandale Ranch, home to roughly 11 million Mexican free-tailed bats from March through October. Bain Walker, owner of the Frio Cave Bat Flight tour company, meets visitors here nightly to lead them to the cavern. We congregated at a ranch entrance on Farm Road 2690 and then caravanned down two miles of dirt road to the parking lot, where a 75-yard uphill walking trail took us to the mouth of the cave.

We took our seats in a rustic amphitheater of limestone blocks, with an expansive view of the surrounding Hill Country and a prime vantage point of the limestone cave’s craggy opening. A gentle evening breeze cooled the hillside as the sun dropped slowly behind the western horizon. As we waited for the bats to emerge, Bain gave a description of the bats and the history of the cave.

The Frio Cave is well suited to the maternity colony, whose females give birth to their pups in mid-June. With an opening on only one end, no running water, a relatively shallow depth of 100 feet, and a temperature of 120 degrees, the cavern “basically acts like a giant incubator,” Bain explains. The region also has plenty for the bats to eat, particularly the corn earworm moth and cotton bollworm moth that pester the farms to the southeast, and the nearby river provides water.

“A quick disclaimer,” Bain adds. “As the bats are coming out, it may ‘rain’—even though there aren’t any clouds. So don’t look up and open your mouth at the same time.”

Of course, Bain was alluding to bat guano. Inside the cave, the guano averages a depth of 10 feet. The nutrient-rich byproduct has been attracting humans since at least 1790, when the Spanish first made record of sending Frio Cave guano to Europe for fertilizer. The Confederacy also extracted the guano for use in gunpowder. These days, a company mines the guano with a skid loader to sell for agricultural fertilizer, but its lease is limited to the winter months, when the bats are in Mexico.

And then it happened. About 15 minutes after sunset, the first bats exploded out of the cave and fluttered into the dusk sky. An excited murmur rose from the crowd, and spectators gathered at the rope barrier to watch bats skim just over their heads. The bats’ wings appeared translucent as they darted haphazardly from the cave opening. Within moments they found their bearings and veered to the right, forming a smoky column that faded to the southeast. The bats would continue to emerge for another few hours, and would return throughout the night and into the next day—except for the unlucky few that fell prey to the opportunistic red-tailed hawks soaring overhead.

On the topic of sustenance, it’s fair to say that restaurant options are limited in the area (many visitors bring their own food), but I found good eats at Neal’s Dining Room in Concan, where I enjoyed a deliciously crispy and thick chicken-fried steak for dinner, and a filling bacon-and-egg taco for breakfast. I also followed a tip to Mama Chole’s, a tiny Mexican food joint in Leakey. The pepper steak—a half-pound beef patty stuffed with slices of jalapeño and smothered in queso sauce—was a Tex-Mex comfort-food revelation.

The aforementioned meals took place within a couple of days, so it’s for the best that I also made time to explore Garner State Park and its range of outdoor activities. Garner spans about 1,420 acres, including 10 acres of Frio riverfront. The park provides one of the public’s best opportunities to venture into the rocky hills and canyons on the edge of the Edwards Plateau. 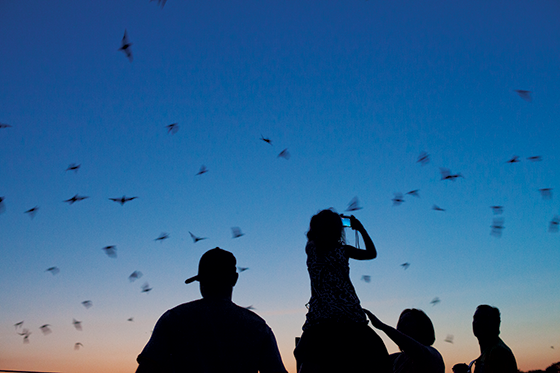 An excited murmur rose from the crowd, and spectators gathered at the rope barrier to watch bats skim

During my March visit, the campsites were busy with families barbecuing, lounging in the shade of live oaks, and playing pickup ballgames. The riverside was also crowded with sunbathers and picnickers with radios booming country and conjunto music. Kayaks and paddleboats navigated the river pools, taking care to avoid the swimmers who jumped from a series of rope swings along the bank. Though the river was too low for a tubing trip, a swim in the 70-degree spring-fed waters was a refreshing jolt.

To get my bearings in the park, I joined one of the regular hikes led by Frank Roberts, the park’s interpretive specialist. We met at the park pavilion, where Frank explained how the Civilian Conservation Corps carved out the park’s original roads and trails, and chiseled its limestone structures during the Great Depression. The park takes its name from the late John Nance Garner, from nearby Uvalde, who served as vice president under Franklin D. Roosevelt. “Cactus Jack,” as Garner was known, actually opposed the park when local constituents proposed it, but his wife, Ettie, liked the idea and helped make it happen.

Our three-hour hike covered four miles, ascending from an elevation of 1,300 feet to one of the park’s 1,900-foot hilltops. Along the way, Frank pointed out the plants and animals that characterize the region and shared interesting stories about the park’s development. We admired the purple petals of the mountain laurel flower, smelled the medicinal scent of the damianita plant, and learned how Native Americans cooked the root of the spiky sotol plant for food. A golden-cheeked warbler sang out from a Lacey Oak shading the trail. We also saw a striking example of a Texas madrone tree, whose old-fashioned nickname of “lady’s leg” made sense after seeing its smooth reddish limbs.

As we ventured up the Old Entrance Road trail, we stopped at an overlook to take in the view of a wide spot in the Frio River valley. Frank explained that in the late 1800s, the valley below was a spur of the Chisholm Trail. A natural entertainer who’s apt to break into song, Frank took the opportunity to demonstrate his singing yodel.

“I try to give visitors a personal view, because it’s like my backyard,” Frank said as we finished up our tour. “It’s my way of helping you feel ownership of the park; you learn the small nuances. There’s a lot more to Garner State Park than swimming in the river and going to the dance.”

No story about Garner State Park would be complete without mention of the dance. On summer nights since the ’40s, and on special occasions such as spring break and Thanksgiving, participants gather at sunset at the park pavilion, under the canopy of a sprawling live oak tree, for a dance that lasts until 11 p.m. Ask around and you’ll hear tales of first dances, teenage crushes, and even marriages that originated on the pavilion’s concrete slab.

On this evening, a crowd formed around the pavilion’s perimeter as families gathered to dance and watch their children frolic. Moms taught their young sons to two-step. Grandfathers whirled their granddaughters around the floor. It was a casual affair, although there was a segment of the teenage population that was dressed to impress—boys in cowboy hats and jeans, girls in boots and cut-off shorts. The music, fueled by a steady stream of quarters in the jukebox, was mostly pop-country hits, interspersed with a few enduring local favorites like “Rockin’ Robin,” and “Amarillo by Morning.”

Overhead, constellations burst with light from the black sky, untempered by the sliver of a crescent moon. When the jukebox played a version of Houston crooner B.J. Thomas’ ode to summer love at Garner, it was easy to understand his sentiment: “Everything’s great after dark, when you’re at Garner State Park.”