The San Bernard River Once Again Flows to the Sea 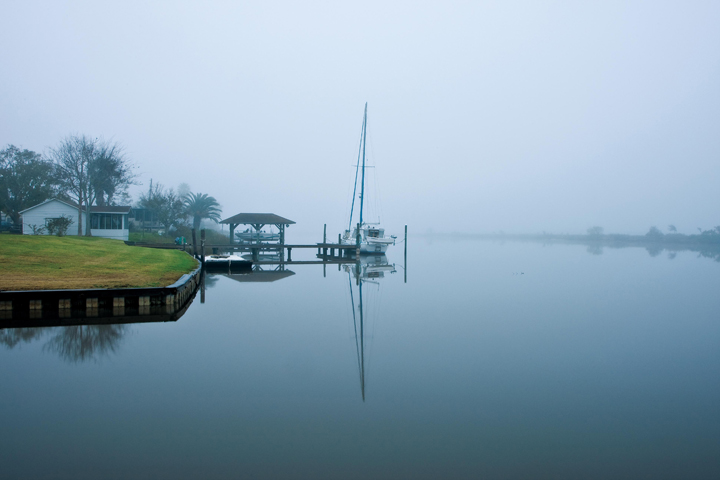 Fog covers the lower reaches of the San Bernard River near the Gulf of Mexico. (Photo by Kathy Adams Clark)

Seeing the San Bernard River flow unimpeded to the Gulf of Mexico is something of a miracle. The project, completed in March 2009, holds the promise for a 21st-Century renewal of the region where Stephen F. Austin issued his first land grants in the 1820s.

Mark Hazelrigg (a retired Dow chemist who spends much of his time volunteering at the San Bernard National Wildlife Refuge) and Jan Edwards (who along with her husband, Roy, helped found Friends Of the River San Bernard) enlightened me regarding the San Bernard’s past, present, and future.

The San Bernard River springs out of the ground in New Ulm and flows 120 miles to the Gulf of Mexico, along the way sustaining the Post Oak Savannah and the Columbia Bottomlands, an old-growth oak forest and wetlands under the protection of the San Bernard National Wildlife Refuge. When the Corps of Engineers diverted the nearby Brazos River in 1929, the sweep of silt from its new mouth progressively choked the mouth of the less powerful San Bernard River, four miles away. By 2006, the San Bernard no longer reached the sea.

During our morning drive around the San Bernard NWR, Hazelrigg explains the importance of the Texas Midcoast Refuge Complex (a string of three preserves—Brazoria, Big Boggy, and San Bernard—that dot the central Texas coast) and the Justin Hurst Wildlife Management Area. Without these preserves, thousands of migrating birds might have insufficient habitat. Some 320 bird species travel here from the continent’s northern reaches to escape cold winters; others from Central and South America and the Caribbean use the preserves as stopovers and resting places in the spring before their long flight to points as far north as Canada. This great convergence attracts up to 1,000 birders for the San Bernard NWR’s annual Migration Celebration in April.

Hazelrigg shows me visitor-access points at the refuge: the trail along the three ponds at Wolfweed Wetlands; the pier, boat ramp, trail, and fishing area of Cedar Lake Creek; the auto tour around Moccasin Pond; and the trail at Cow Trap Marsh.

To learn more about the area, I meet Jan Edwards at her home, a former shrimper’s cabin overlooking the San Bernard at River’s End, which she and her husband, Roy, renovated several years ago.

We stop by the Circle Bar C fishing camp, which opened as a result of the San Bernard’s new life. A steady stream of recreational fishermen has returned since the river reopened.

“Mom used to bring me here fishing as a kid,” says the new owner, 35-year-old Kelly Chapman, who grew up in nearby Wharton.

Chapman pulls out a black-and-white photo of a pretty, young girl fishing on the river. “That’s my Mom when she used to fish here,” he says. Then he reveals a snapshot of her taken more recently, when she snagged the biggest fish she’d ever caught from the dock here.

Standing beside the bait tanks full of fish, Chapman says that most weekends he sells out of everything—fresh table shrimp, live bait, frozen shrimp, and crab.

With Willie Nelson playing on the sound system in the background, Chapman talks about further renovations and how the locals next door have returned and adopted him as family. He also shares his concerns: Will the river stay open? In the last few weeks the sands had been shifting in the stabilization process; at times the new mouth was six feet deep, then only 18 inches deep.

I look beyond us toward the river, and this evening, the San Bernard flows swiftly.

As we leave the refuge, we pass a thick stand of oaks that protects a treasure inside: Texas’ largest tree and the Texas state champion live oak, “Big Tree.”

Before the light fades, I call it a day, say goodbye to my friends at River’s End, and drive back to Houston. On Texas 288, I pass the larger-than-life statue of Stephen F. Austin created by Houston sculptor David Adickes. Austin stands erect, facing the setting sun. I think about the new life coming to the San Bernard River, and the life that’s always been there, and remember the quote by Leonardo da Vinci that Jan Edwards shared: “When you put your hand in a flowing stream, you touch the last that has gone before and the first of what is still to come.”